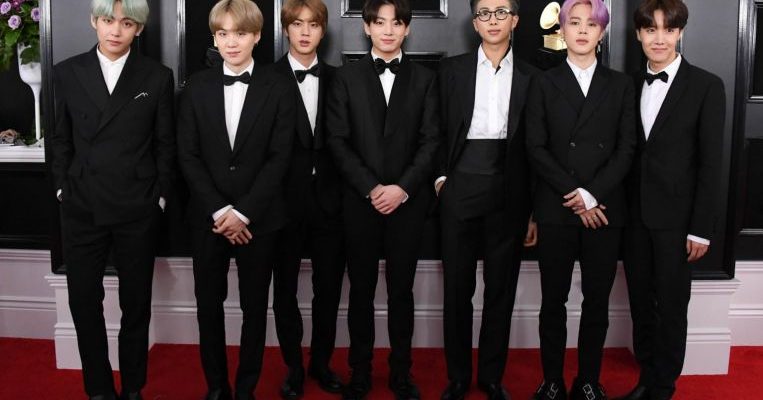 LOS ANGELES (REUTERS) – Rain did little to dim the sizzle on the Grammys red carpet on Sunday (Feb 10) in Los Angeles, as a bevy of artists in sparkling, eye-popping attire stepped down the music world’s main catwalk – or, in Cardi B’s case, tip-toed.

The rapper, surrounded by handlers, took tiny steps down the red carpet as her pearl-encrusted costume seemed to get the best of her.

Was she Venus rising from the sea or a pearl inside an oyster?

Ankle-binding black velvet encased the singer’s lower half. But at the hips arose a massive pink fabric fan, like a clam shell.

To top it, off Cardi B accessorised with pink princess gloves and a pearl headdress, as she posed and pouted for the cameras.

Even Lady Gaga, not known for being demure when it comes to red carpet fashion statements, looked pale by comparison in her silver metallic dress.

Some of the artists seemed to have received a memo demanding “more volume, please.”

Rapper Tierra Whack brought out the “wow” factor with a flowing, multicoloured feathered cape worthy of Liberace, while Tayla Parx was encased in Barbie pink, her orange hairdo peeking out of a voluminous coat and dress covered with what appeared to be thousands of bits of fabric tabs.

Bebe Rexha sported a bright scarlet gown with layer upon layer of tulle and a train that looked dangerously trippable.

Ahead of the show, the singer had taken to Instagram complaining about an unnamed designer who refused to dress her due to her not being “runway size” .

“We are beautiful any size! Small or large!” she wrote. “My size 8 ass is still going to the Grammys.”

Havana singer Camila Cabello sported a backless gown of form-fitting fuchsia rhinestones, while Lee Ann Womack showed off a low-cut bodice trimmed in rhinestones and a sparkly bow at the waist:

“This is not my first rodeo,” said the country singer.

Sequins were the choice of Hawaiian artist Kalani Pe’a, who brought some sparkle under the tents with a grape-coloured sequin jacket.

South Korean boy band BTS, in their first appearance at the Grammys, looked conservative in traditional tuxedos despite some of the seven members’ green and pink hair.

Also in sombre black were the Backstreet Boys, the US band who said they are nearing 26 years together.

Politics and social issues, such as the #MeToo movement, were once gain talking points on the red carpet.

Many of the female nominees said it was important for young women to see them at the awards show, and come away inspired.

“I want young women to see me … come and take my place, win an award,” said producer and DJ TokiMonsta, who wore an array of Girl barrettes in her hair.

A pregnant Margo Price, wearing a flowing red chiffon dress with silver stars at the bodice, saluted the Grammys for including more female artists.

“Women always have to work twice as hard as men,” she said.

Singer Joy Villa, who wore a “Make America Great Again”dress to the awards two years ago – a reference to US President Donald Trump’s campaign slogan – did not shy away from controversy this year, with a silver dress adorned with barbed wire and spokes: the Border Wall dress.

When the singer turned for the crush of photographers, the words “Build the Wall,” were seen on the back.