Jerrod Carmichael didn’t shy away from controversy as he hosted his first Golden Globes on Tuesday night as he appeared to mock Scientology and the whereabouts of Shelly Miscavige.

The comedian, 35, hosted the glamorous return of the prestigious awards show following several years of a quieter affair, firstly due to the Covid-19 pandemic.

Last year’s show, meanwhile, was turned into a ‘private event’ at the last minute by organisers the Hollywood Foreign Press Association (HFPA), after it faced heavy criticism over its lack of Black members.

However the 2023 edition was back in regular form, with host Jerrod ready to address the controversies as at one point he joked to the audience that he had been chosen to host because he was black.

Later in the show Jerrod introduced Tom Cruise’s Top Gun: Maverick co-stars to the stage, with Tom himself not in attendance after previously handing back three awards he had won previously in protest at its lack of diversity.

But as Jerrod introduced Maverick stars Glen Powell and Jay Ellis, he suddenly appeared on stage with three Golden Globes in his arms and said he had found them backstage. 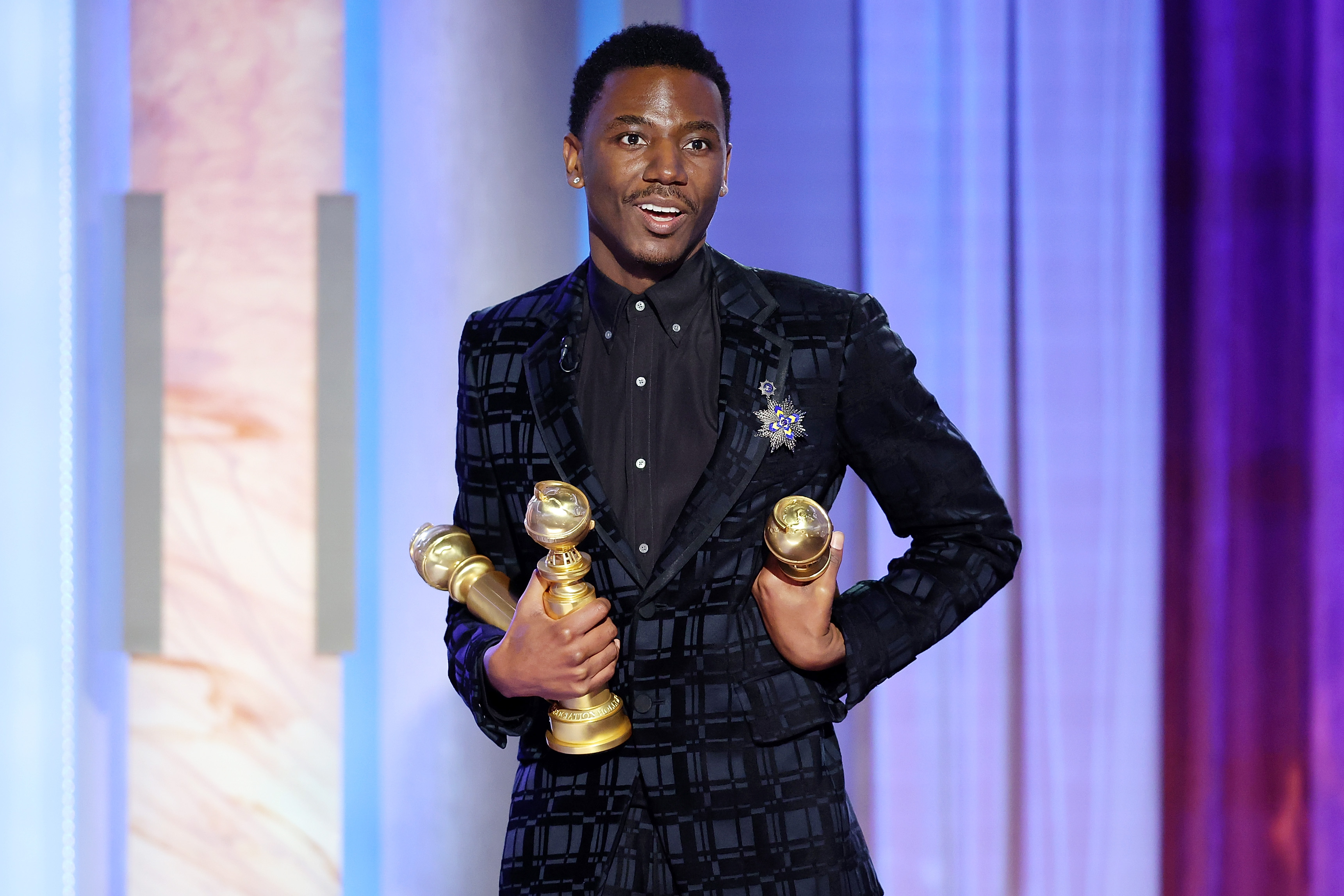 ‘The three Golden Globe awards that Tom Cruise returned,’ he announced, adding: ‘Can we take these three things and exchange them for the safe return of Shelly Miscavige?’

Mission: Impossible star Tom is famously a devout follower of the Church of Scientology, and close friends with its leader David Miscavige, who was best man at his wedding to Katie Holmes.

Miscavige’s wife, Shelly, has not been seen in public since 2007, although her husband and the Church of Scientology have always denied she is missing.

In 2013, sources from the LAPD closed an investigation into her whereabouts, telling the Los Angeles Times they had ‘located’ Shelly.

That investigation came after King of Queens actress Leah Remini – a former member of the church and now one of its most vocal critics – filed a missing person’s report.

Gasps could be heard from the audience as comedian Jerrod made the dig at Scientology and the rumoured missing woman, however Leah thanked the host for drawing attention to it.

She took to Twitter during the televised event where she wrote: ‘Thank you Jerrod Carmichael! Where is Shelly?’

Last year, following the criticism of the HFPA, the awards were announced via periodic updates from the Golden Globes website and official social media accounts, after US network NBC refused to air the show.

The organisation subsequently vowed to overhaul its bylaws and implement changes addressing ethics and inclusion.

Best Picture, Musical or Comedy: The Banshees of Inisherin

Best Performance by an Actor in a Motion Picture, Drama: Austin Butler (Elvis)

Best Performance by an Actress in a Motion Picture, Drama: Cate Blanchett (Tár)

Best Performance by an Actress in a Motion Picture, Musical or Comedy: Michelle Yeoh (Everything Everywhere All at Once)

Best Performance by an Actor in a Motion Picture, Musical or Comedy Colin Farrell (The Banshees of Inisherin)

Best Supporting Actor – Motion Picture: Ke Huy Quan (Everything Everywhere All at Once)

Best Performance by an Actor in a Television Series, Drama: Kevin Costner (Yellowstone)

Best Performance by an Actress in a Television Series, Drama: Zendaya (Euphoria)

Best Limited Series, Anthology Series or a Motion Picture made for Television: The White Lotus (HBO)

Best Performance by an Actress, Limited Series, Anthology Series or a Motion Picture made for Television: Amanda Seyfried (The Dropout)

Best Performance by an Actress in Supporting Role, Limited Series, Anthology Series or a Motion Picture made for Television: Jennifer Coolidge (The White Lotus)