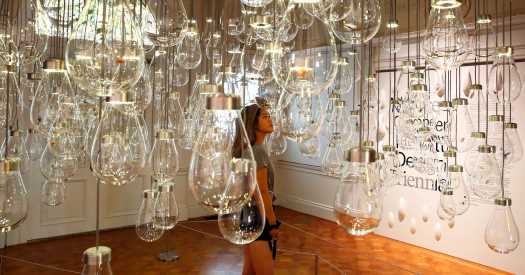 Plastics transformed the material world after World War II. Today, they pollute our oceans. A better future will be made with … algae. Or bacteria. That’s the dominant theme of a sweeping exhibition, “Nature: Cooper Hewitt Design Triennial.” On display here at the Smithsonian’s temple to the culture of design, on upper Fifth Avenue, are objects you might once have expected only at a science museum: Proteins found in silkworms are repurposed as surgical screws and optical lenses. Electronically active bacteria power a light fixture.

Heedless exploitation of resources has undergirded industrial society and is quickly becoming untenable. The exhibition celebrates ambitious collaborations by teams of designers and scientists striving to achieve human ends in ways that don’t require extracting fossil fuels from the earth, for example, and that restore such vast damaged realms as oceans. The “Nature” triennial is positing no less than a new relationship between the human and the natural. 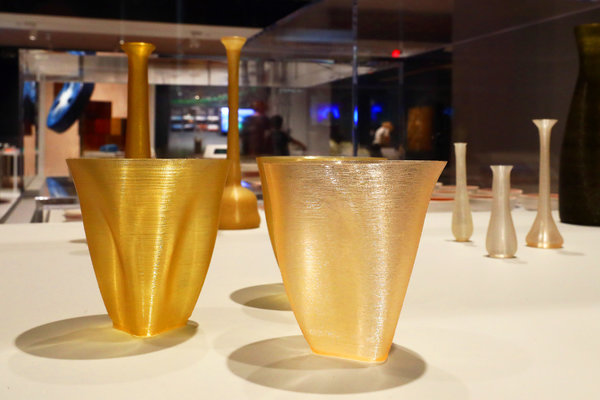 It displays some 60 projects and products from around the world that define a reconciliation of biosphere and technosphere, as Koert van Mensvoort, a Dutch artist and philosopher, puts it in the show’s excellent catalog. (The exhibition was organized with the Cube design museum, in Kerkrade, the Netherlands.)

The Cooper Hewitt’s curators are illuminating how environmental challenges are scrambling the roles of designers, scientists — and the museum itself. “Nature” isn’t an easy fit for the Cooper Hewitt. Built upon a decorative arts foundation, the museum’s traditional mission has been to promote “good” design — of office furniture, gadgets and appliances — and the singular talents who create it.

In “Nature,” designers and researchers pose bigger questions, envisioning possibilities that may not be realized for decades, and help us understand arcane data at nano and macro scales. To address fundamental issues in climate change and habitat loss, with their potential for mass extinctions, requires that a creative designer invest passion (and subsume the ego) in a collaboration with scientists working at the cutting edge of research.

The curators maintain that scientists, too, are “designers” of organisms like bacteria and yeast, which are becoming the components of new materials and products.

Project intentions are frequently remedial rather than exploitative: restoring a fragile world that has been depleted, polluted, eroded and fragmented by human activity.

Algae and bacteria are abundant, and the museum shows how such substances replace destructive industrial materials, especially petroleum-based plastics. Curators highlight an ethereal translucent raincoat made out of algae by Charlotte McCurdy while she was a graduate student at the Rhode Island School of Design. In her thesis, “After Ancient Sunlight,” Ms. McCurdy developed a carbon-negative, algae-based plastic. Making the raincoat actually reduces the amount of the atmospheric gas that is warming the planet, Ms. McCurdy said.

Inspired by the way coral forms in nature, Ginger Krieg Dosier and her partner, Michael Dosier, use biotechnology to “grow” concrete bricks that don’t require high-temperature firing, thereby reducing energy use and carbon emission that warm the planet. Nutrients and microorganisms cured the Biocement Bricks, which are manufactured in Durham, N.C.

Many of the projects shown range well beyond the biosynthetic to help us see nature and our relationship to it in a new light. Nacadia is an immersive therapy forest garden at the Arboretum in Hoersholm, Denmark. Designed by a landscape architect, Ulrika K. Stigsdotter, with the University of Copenhagen, the program puts into practice a growing body of research that supports the common-sense idea that engagement with nature is healing, especially for those with post-traumatic stress disorder.

The Bamboo Theater is a domed structure made by bending flexible and resilient bamboo stalks and weaving them together. The structure barely alters its setting, yet the architect Xu Tiantian conceived it to strengthen community social and cultural bonds in Hengkeng, China, a remote mountain village.

Manipulating — but not exploiting — nature

The Cooper Hewitt’s curatorial team of Caitlin Condell, Andrea Lipps and Matilda McQuaid, working with Cube’s Gene Bertrand and Hans Gubbels, argues that we can’t afford to think of nature as the implacable foe that must be civilized, as Western culture has long done. The difference is underlined by examples drawn from the Cooper Hewitt’s historic collection, in a section called “Nature by Design.” In fabrics and objects, nature is deployed as exquisitely cultivated flowers and trees useful in ornamenting lives.

But environmental challenges can seem overwhelming, paralyzing action. In such times a talented designer can compel society to respond by succinctly capturing the urgency of a problem. A lovely waters-eye view of a magnificent iceberg is revealed, in a longer glance, to be a depressingly ubiquitous plastic bag. Jorge Gamboa, a graphic designer based in Puebla, Mexico, photo-manipulated “Plasticeberg” to promote awareness of the need to reduce waste — and the harsh reality that 18 billion pounds of plastic ends up in the ocean each year. It has worked, becoming an internet sensation, a poster and cover of National Geographic.

Images of matted masses of plastic covering square miles of ocean have drawn attention and resources to the problem, which is the subject of several displays in the show. Babylegs (2017-19), designed by CLEAR (Civic Laboratory for Environmental Action Research) and Max Liboiron, is a monitoring device to catch microplastics — the tiny, harmful particles that result as plastics deteriorate over years. It can be dragged behind a boat, “trawling” a filter made from recycled infant leggings, on pontoons of used plastic bottles. It is a rather elegant way to address the problem — by recycling the harmful leggings and bottles.

Michelin, in 2017, conceived a tire that could be created from biologically sourced, biodegradable materials made into intricate wirelike supports inspired by the structure of coral. It would replace the masses of discarded steel-wire reinforced rubber tires that pile up around the world. Though still a “vision,” it could never be conceptualized without the technology of 3D printing — ubiquitous in the exhibition — which has the capacity to mold elaborate three-dimensional structures using computer instructions.

Leather may be a natural material, but fewer herds of leather-skinned cattle are needed in the interest of reducing greenhouse gas emissions and freeing up agricultural land for more intense farming. Modern Meadow, based in Brooklyn and Nutley, N.J., has developed an animal-free bioleather called Zoa that uses genetically engineered yeast to produce collagen, the protein in skin. It is among several projects devising replacements for common materials that harm the environment. Others herald the use of genetic modification and synthetic biology. Issues around the manipulation of living substances are controversial: The Chinese researcher He Jiankui stunned the scientific community by claiming that he had created the world’s first babies from genetically edited embryos, hoping to make them H.I.V. resistant.

Gene-manipulation and other biological modifications are becoming available to independent researchers as well as “biohackers” who are taking the redesign of life into tech start-up mode.

The curators laud the proliferation of such “citizen scientists,” but there are risks when promising speculations are promoted convincingly on the internet before significant problems have been solved or consequences disclosed. “This can be genuinely harmful to the field,” said Suzanne Lee, chief creative officer at Modern Meadow, in a conversation recorded for the catalog.

The costs of extinction

“The Substitute” is a simulation that delivers a wallop. A computer-animated blob of pixels gradually resolves itself into a nearly life-size male white rhino, which paces and growls at us in photorealistic splendor. It was derived from Sudan, the last living male of the species, who died in 2018. He’s an ugly brute with an oversize head and horned protrusions that look sourced from the evolutionary parts bin, but he seems to gaze upon us humans accusingly for our role in the tragedy of extinction.

Now scientists are trying to bring back the species through an experimental process that includes interspecies in vitro fertilization. The simulation’s creator, Alexandra Daisy Ginsberg, who focuses on the role of design in biology, asks, “Will humans protect a resurrected rhino, having neglected an entire species?”

Michael Gallis, an urban strategist not associated with the Triennial, has described the industrial world as heedlessly relying on a conception of natural resources as abundant and cheap. The teams in the Triennial guide us toward a more sustainable future of alternative materials and renewable, nonpolluting resources and manufacturing. “Nature” shows us a post-consumption future, in which the urgency of restoring ecological function trumps the allure of the latest gadget.