Few classical recordings have aroused as much fascination as Glenn Gould’s 1981 take on Bach’s “Goldberg” Variations.

Gould, whose first major-label recording was a classic 1955 account of the “Goldbergs,” rerecorded them more than 25 years later. He then died, at 50, just after the release — leaving the two Bach statements as bookends to his career.

Now the score he used while making the 1981 recording has resurfaced, offering clues about the creative process of one of the most original pianists of the 20th century. The heavily marked-up score — which will be offered at auction on Dec. 5 at Bonhams in New York — shows the nearly obsessive attention to detail Gould was famous for, especially after he stopped giving live performances in order to focus entirely on making recordings.

“I would call this the equivalent of a shooting script of a movie,” said the critic Tim Page, a professor of music and journalism at the University of Southern California and the editor of “The Glenn Gould Reader.” “He keeps track of which takes he likes, and how long they are.”

Gould’s jottings, mostly in black felt-tip pen, are not always legible. They mostly appear to be notes he made to himself as he assembled takes of the recording. He calls for a “wee shade less” in one section, regularly marks the timings of various takes, and seems to refer to a film he was shooting at the time of himself playing the “Goldbergs.” There are few obvious interpretive notes, but he does circle the rests in one variation, as if for emphasis. 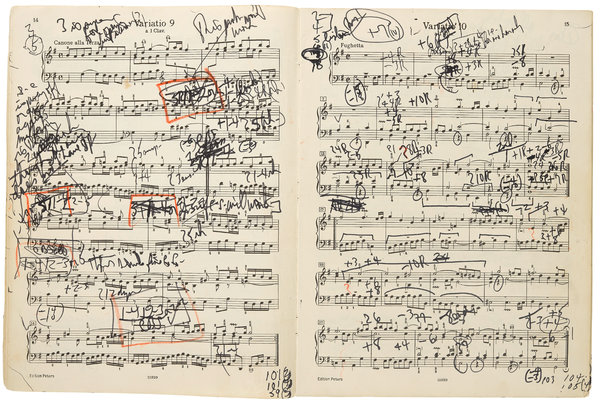 Mr. Page, who discussed the differences between the 1955 and the 1981 recordings in an interview with Gould that is included in the boxed set “Glenn Gould: A State of Wonder,” said that after examining the score earlier this year, he had no doubts as to its authenticity. (The seller has asked to remain anonymous.)

Nicholas Hopkins, whose painstaking transcription of Gould’s 1981 recording was published in 2015, said that he had believed that Gould only used Ralph Kirkpatrick’s edition of the “Goldberg” score, because there were three copies of it in Gould’s archive in Canada. So when he was told that another score had surfaced — and that it was a different edition, published by C.F. Peters — he was surprised.

“That’s fascinating,” he said in an interview. “I’m anxious to see it.”

Mr. Page said that he had asked Bonhams to make a high-quality copy of the newly rediscovered score, which the auction house estimates could sell for $100,000 to $150,000, to offer to the National Arts Center in Ottawa. There, he said, “it will be available to scholars, and anyone who wants to see it.”