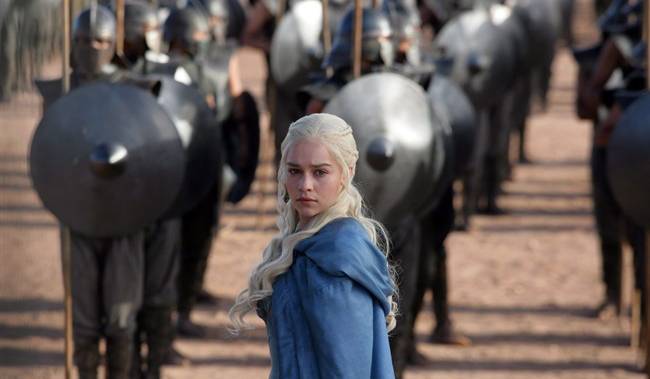 Game of Thrones’ penultimate episode built towards a point of no return for Daenerys Targaryen.

There are tons of spoilers below so if you’re not caught up with Game of Thrones, stop reading now…you’ve been warned.

Daenerys of the House Targaryen — the First of Her Name, The Unburnt, Queen of the Andals, the Rhoynar and the First Men, Queen of Meereen, Khaleesi of the Great Grass Sea, Protector of the Realm, Lady Regent of the Seven Kingdoms, Breaker of Chains and Mother of Dragons — fulfilled her destiny, but at what cost? Her hunger for power has fueled the series from its first episode; she acted perfectly in character.

“The Bells” begins rather quietly, at Dragonstone, where Daenerys is moping around, isolated. She has spent two weeks alone since the death of Missandei and is upset with Jon, mad at Tyrion and especially mad at Varys for sharing the truth of Jon’s lineage.

Before we could get comfortable and emotionally prepared for this week’s episode, Varys, Master of Whispers, is standing on the beach looking stoic and Dany is sentencing him to death. Out of the shadows, Drogon appears, bearing his 3,000 teeth and fires. Just like that, a favorite character gone and more will follow in this week’s carnage.

Daenerys plans to incinerate King’s Landing at daybreak with the Unsullied, remaining Dothraki and Jon Snow’s army from the North. A frightened and nervous Tyrion Lannister finds out that his brother, Jaime, has been captured on his way to King’s Landing.

Tyrion allows Jaime to escape and surrender King’s Landing by ringing the bells, and allowing the people salvation from the dragon fire that will rain upon them otherwise — if, that is, Jaime can convince Cersei to abandon and secretly leave the city and head to Essos to start their life anew.

As morning comes, so does war, and things are tense in King’s Landing, where a sea of common folk are being herded inside the Red Keep for protection, or more likely as a human shield for Cersei Lannister. The Golden Fleet and the Iron Company assume their position outside the gates and line up to meet Daenerys’ armies.

Meanwhile, over the sea, Drogon drops out of the sky and within minutes, the Iron Fleet of Euron Greyjoy is decimated. The fleet’s dragon-killing weapon is no match for The Mother of Dragons and her son.

As fire rains from the skies upon Cersei’s armies, Arya Stark, Jaime Lannister and Sandor “The Hound” Clegane infiltrate King’s Landing. The Lannister forces are overwhelmed and surrender, and as the title of the episode suggests, the bells ring. An enraged then Daenerys attacks the city, burning more soldiers and civilians. Grey Worm, also seeking revenge, attacks the surrendered armies and sets about sacking the city.

It’s a easy win for Daenerys and company. Even Cersei sees it, perched atop the Red Keep with a concerned Qyburn and the Mountain, her zombie bodyguard. As the city’s fortifications burn to ash and enemy forces close in, a single tear rolls down Cersei’s proud face.

As King’s Landing is under attack and the smell of burning flesh permeates, Jaime approaches the banks of Blackwater Bay and finds Euron Greyjoy. Having survived Drogon’s attack, he makes landfall at the same exact time that Jaime walks into frame to have quick fight for Cersei’s love. In a scene ripped from a telenovela, the two tussle and are both wounded. Euron, thankfully, dies.

Back in the crumbling city, Arya and The Hound arrive at the Red Keep. The Hound is searching to battle his mortal enemy, his brother, The Mountain, in what fans have been asking for since Season One — Cleganebowl. Arya is there to kill Cersei, who is at the top of her kill list. As they race to their enemies The Hound urges Arya to get out while she can, encouraging her to become better than he. Revenge shaped him his whole life and he does not want a similar fate for her. He begs her to reconsider and in very tender moment, The Girl With No Name chooses to live and forget her vengeful feelings and before long Arya is running terrified through the streets like everyone else.

As Cersei, The Mountain, and Qyburn flee the Red Keep, they encounter The Hound and Cleganebowl is on. Qyburn is quickly disposed of by The Mountain, and Cersei sneaks past them as the two giants go head to head. They exchange brutal punches, and The Mountain’s helmet is torn off to reveal a bloated, pustule-filled decaying face.  He seems impervious to everything, including a dagger to the brain, so The Hound has no recourse other than throwing his body through a crumbling wall. Both meet their fiery death.

King’s Landing is destroyed, and Cersei meets Jaime as they try to escape together. Two of the main antagonists of Game of Thrones run for their lives in the bellows of the Red Keep but find themselves trapped as the towers collapse on their escape tunnels and are crushed. Their end felt anticlimactic. So many have suffered at the hands of these two since episode one. They deserved poetic, meaningful deaths. Instead, rocks took them out.

Above ground, the city continues to burn and the horrors of Daenery’s unhinged actions are witnessed by Jon and Arya separately. Jon calls for a retreat of his armies as civilians flee a disintegrating King’s Landing and rape and pillaging ensues. Arya cowers as Drogon lights the city ablaze on from above. She survives miraculously and rides away on a white horse, with possibly a new name on her list.

On the latest podcast, hosts Jeremy Baker and Meredith Geddes chat about some of their favourite moments of “The Bells” and talk about their theories and hopes for the final episode of Game of Thrones.

If you enjoy Merbear and the Maiden Jer, please take a minute to rate and review it on Apple Podcasts, and be sure to tell a friend about the show.

Thank you, Joanna Robinson, senior writer for Vanity Fair and member of the Cast of Kings podcast, and also Dr. Robert Rouse from UBC for joining us this week!

We LOVE that you are loving the “Merbear and The Maiden Jer” podcast! If you haven’t subscribed yet — what are you waiting for?