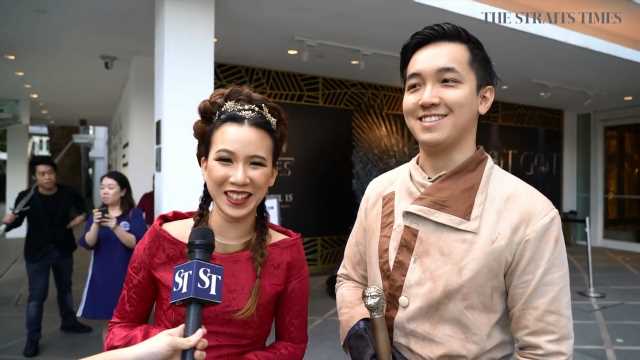 Before the hour-long screening, invited guests were treated to cocktails made with White Walker by Johnnie Walker, the whisky brand’s limited edition Game Of Thrones-themed blend.

Fans also had the chance to take photos on the iconic Iron Throne and get their faces painted with Game of Thrones sigils, also known as house seals.

In celebration of the premiere screening, several avid fans dressed up as characters from the series.

Husband-and-wife duo Derek Lee and Charlotte Lun, both 27, were decked out in costume as Jaime and Cersei Lannister, respectively. The Lannisters are twins and former lovers on the television show.

Mr Lee and his wife had got married in the costumes at their Game Of Thrones-themed wedding two years ago, and brought them out of the closet for the premiere.

“We don’t usually cosplay, but we like to do this for fun. Since we already had the outfits, we decided to dress up,” said Mr Lee, a sales executive.

Other fans like Ms Esther Tham, 34, made their costumes specially for the season premiere.

The UX consultant came dressed as her favourite character Daenerys Targaryen, complete with a blonde wig and light blue cape.

Ms Tham had spent half a day crafting the cape and fashioning dragons out of aluminium foil to attach to the flowing cloth.

She said: “I wanted to have fun and show support for Daenerys.”

Guests also had a chance to win merchandise such as a Lego Iron Throne during a trivia segment and best dressed competition hosted by radio duo The Muttons.

Besides the goodies, watching the final season’s first episode on the big screen was the biggest draw of the night for many fans.

“It was like a big-scale movie, and I wish it didn’t have to end. The first episode definitely lived up to my expectations, and I can’t imagine what the remaining five episodes will be like,” she said.

For psychotherapist Winston Tay, 39, watching the season premiere alongside like-minded fans was a plus.

He said: “The great thing is that you are watching it with other fans, and everyone responds together to every scene.”