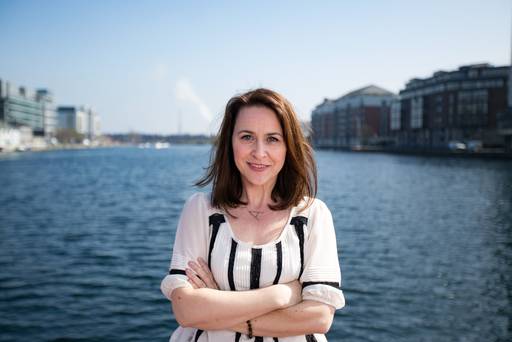 Everyone’s a little bit fearless at 16. But singer Annalene Beechey was ferociously plucky even by the standards of headstrong teenagers. So when, as a young woman fizzling with ambition, she heard West End super producer Cameron Mackintosh was holding open auditions for Les Miserables in the West End, she didn’t think twice. Off she went in pursuit of her dream.

“I queued all the way around the theatre,” remembers Beechey, Wexford-raised and now a shining star of British musical theatre with Wicked, Sweeney Todd and Phantom of the Opera among the blockbusters under her belt. “Then you walk in and sing half a song. I had all the bravado you have as a 16-year-old. A year later they were bringing Les Miserables to Dublin and got in touch.”

Because of Les Miserables and her first experience of the spotlight, Dublin naturally holds a special place in her heart. So it’s sure to be an emotional journey for the singer and actress as she returns to the city in May for a new run of the Rodgers and Hammerstein East-meets-West classic, The King And I, at the Bord Gáis Energy Theatre.

Indeed, without Ireland, it’s doubtful she would have had the career she has, she feels. While her accent may be English and she has spent the majority of her professional life treading the boards in the West End, hers is a success story forged this side of the Irish Sea. “When I was seven the entire family moved to Gorey,” she recalls, her expressive eyes lighting up at the memory. “It wasn’t even in the town – it was just outside. The middle of nowhere.

“We’d been living in Coventry. However, it was a tricky time for my parents. Things weren’t going that well. They thought, ‘Well let’s just up sticks’. I have an older brother and sister. We set off for Ireland. Two cars loaded with people, furniture, a couple of dogs, a tortoise.”

Her older siblings probably suffered culture shock, she feels. But being so young she took to her new surroundings – and her national school in Wexford – without a care. And it was at Gorey’s solitary theatre house that she performed in public for the first time, her passion stoked by watching her parents in an am-dram production of Fiddler On the Roof.

“I knew very early on it was something I wanted to do,” she recalls. “My mum and dad realised I could sing. They brought me to a lovely lady named Nuala Smith, who taught me the basics of breathing. That is where I learned the foundation of singing. I did a couple of Feis Ceoils. I would always do better in the more performance-based categories rather than the purely technical ones. I’d found my calling. By the time I finished school, I knew it was the only thing I wanted to do.”

She moved to Dublin and studied at what is today the Bull Alley Theatre Company in Dublin. Beechey was still enrolled there when, on a trip to see her sister in London, she auditioned, X Factor-style, for Les Miserables.

And as she says, 12 months later she got the call as understudy to the actress portraying Cosette in the 1993 Point Theatre run. Looking back, she wonders why she wasn’t a bundle of nerves. But when the tap on the shoulder came and she had to step out as Cosette she leapt into the arms of the opportunity.

“Were there any nerves? No, I remember absolutely loving it. That’s the thing with terror – it’s fight or flight. I’ve gotten worse as I’ve gotten older. But back then it was far more excitement and less nerves. The nerves come from not wanting to mess it up. I want to tell the story and get everything right and have everyone enjoy it.”

The job is as much graft as glamour, she says. And you’re not even as good as your last show. You complete a run and then have to go up for auditions like everyone else. The rejection still hurts. If she loses out on a part she takes a day to herself, just to grieve a little. Yet it’s clear she adores the theatre world – and couldn’t imagine doing anything else.

“I will never forget first day of rehearsals of Les Miserables. It was in a rehearsal room in the middle of London. I thought I’d walked into Willy Wonka’s Chocolate Factory.”

The King and I is a different prospect. It began on Broadway in 1951 and was then adapted into the iconic 1955 Yul Brynner/Deborah Kerr film (Brynner reprising a part he had portrayed on stage).

Beechey steps into Kerr’s shoes – and voluminous frocks – as Anna, the school teacher arriving in Siam at the invitation of a King who wishes to modernise the country. Cultures clash but an unlikely romance soon bubbles up between the prim Englishwoman and starchy monarch.

“The movie is so iconic and special,” says Beechey. “At some point I watched it – just to catch up. But you take it and then you put it aside and you get on with it.”

Getting on with it involves not only mastering Rodgers and Hammerstein’s complex songs and dialogue – but also learning how to act from within the many vast dresses Anna must wear at court.

“I have three underskirt hoops,” she says. “One we call the ‘travel hoop’. It’s slightly smaller. In the opening scene we have a boat that we arrive on. So it’s smaller and more practical. Then we have the medium hoop for everyday wear – it’s a bit bigger.

“And then what I lovingly term the ‘XXL’, which is the iconic Shall We Dance? dress. It weighs 40lbs and has approximately 10 metres of fabric. It really weighs a tonne. It has a life of its own. It swirls – and just keeps moving when you stop. You have to really ground yourself.

“But they’re absolutely stunning. And the wide skirt is symbolic – it is the circle within which the female is protected.”

The King and I was adapted from the memoirs of Anna Leonowens, governess in the 1860s to the children of King Mongkut of Siam (modern day Thailand). Rodgers and Hammerstein turn it into a story of love across cultural divides and a subtle plea of tolerance and mutual understanding.

And if she doesn’t see any parallels with the present day British Royals and their Instagram-mediated intrigues, Beechey nonetheless feels The King and I will speak to contemporary audiences. As someone who doesn’t hold back their anti-Brexit opinions on Twitter, Beechey believes that the new production has, in particular, arrived at an interesting moment in terms of its politics.

“You have these people from very different worlds who do not understand each other at all. The bottom line is that they are both human beings learning to live alongside the other. We should all be trying to do that.”

It’s impossible to sit down with someone in entertainment today without broaching #MeToo. The theatre world has not yet been engulfed in scandals the way Hollywood has. And Beechey has no horror stories.

But as the mother of nine-year-old Rose and seven-year-old Harry – they live, together with her theatre producer husband, in Kent – she feels strongly that more must be done to encourage parents in the business. “It needs to change in terms of being family-friendly. It’s quite a big deal for me leaving my children for a couple of weeks at a time.

“I’d worked in my career for 20 years or so – and then had children. I took a step back because I didn’t feel I could be a parent and do that job six days a week and do it well. [With The King and I] I want to see if I can still do it and have a fulfilling family life.

“Things are changing. The industry has lost some really fantastic performers who have taken time out to have children and can’t get back in, because of the childcare costs and the time commitments. We as an industry have to make sure there is room for mothers to do both.”

‘The King and I’ comes to BGE Theatre, Dublin from May 21-29, see bordgaisenergytheatre.ie