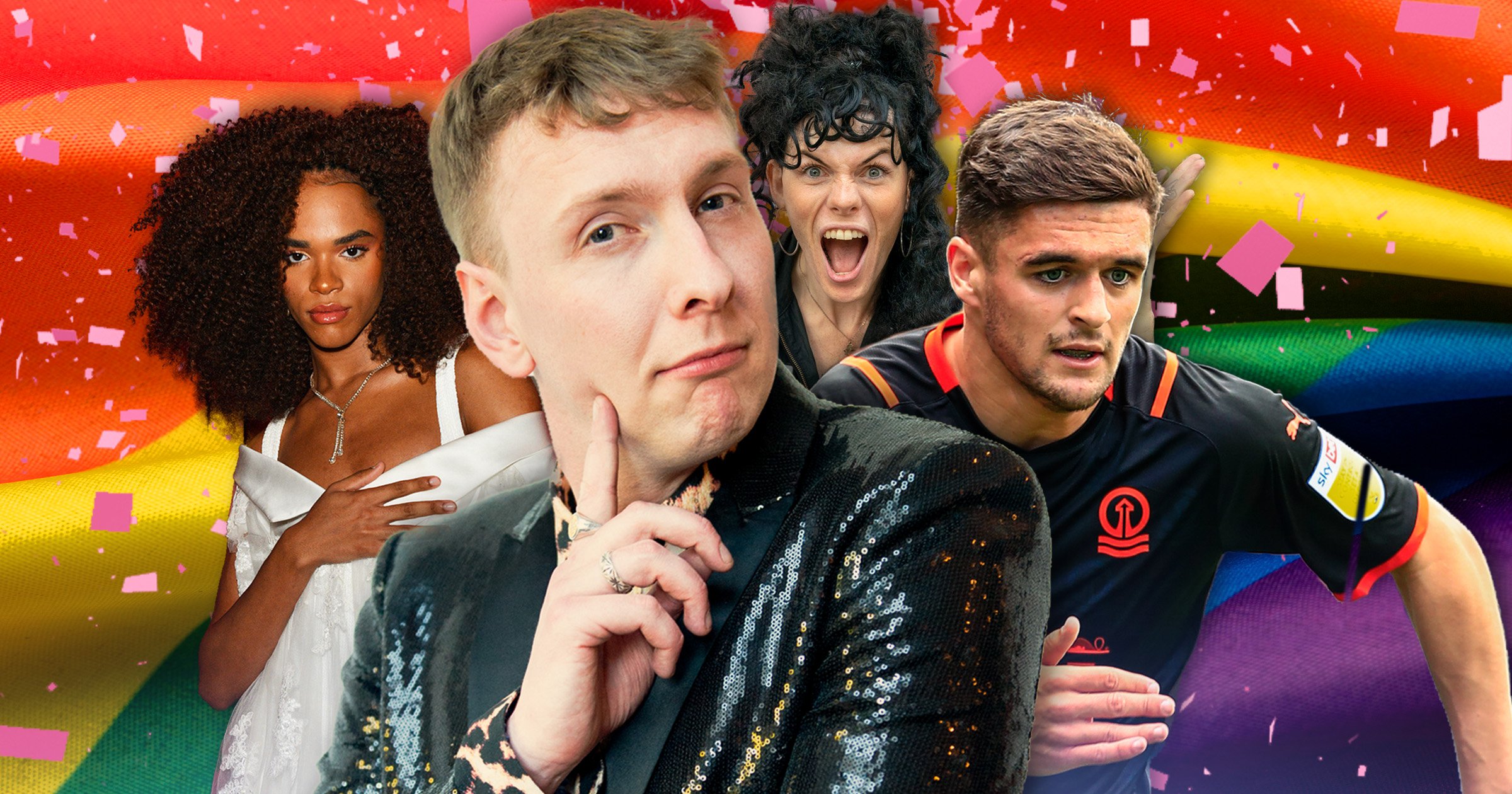 It’s undeniable that 2022 has been quite the year for LGBTQ+ representation, and we must pay tribute to the celebrity heroes who have been tirelessly fighting for better.

Over the past 12 months, famous faces from Joe Lycett to Jordan Gray have been brilliantly and defiantly using their platforms to instigate change within our heteronormative world.

We’ve seen our most adored and treasured celebs express trans joy, call out disingenuous allyship, come out, and refuse to put a label on their sexuality. Heck, we’ve even seen a trans person strip naked on primetime television.

It’s been quite the ride, and we’ve got plenty to be proud of.

Let’s take a moment to honour some of Metro.co.uk’s LGBTQ+ heroes as we brace ourselves for 2023.

We know we’re stating the obvious here, but Joe Lycett has had a blinder of a year.

The comedian went viral during the World Cup 2022 in Qatar for appearing to shred £10,000 of his own money after David Beckham ignored his ultimatum to end his relationship with the country.

Of course, the whole thing was an elaborate ploy to shine a light on Qatar’s heinous stance on LGBTQ+ rights, which currently rules homosexuality as illegal and anyone found participating in same-sex sexual activity can be punished with up to seven years in prison.

He also wanted to make a point of the hypocrisy of celebrities like Beckham, who had been hailed an ‘icon’ within the LGBTQ+ community in 2002 when he became the first ever Premier League footballer to star on the cover of Attitude.

It was a sensational effort from Joe and the impact that he had was felt far and wide. More of this please.

Jordan Gray gave a powerful live performance on Channel 4 in October which ended with her stripping naked.

She belted out her song, Better Than You, a beautiful tongue-in-cheek celebration of her trans experience, before taking off her clothes and playing the keyboard with her penis.

It was an important moment in television and marked a cornerstone in the normalising of trans bodies in the mainstream media.

While the spectacular scenes weren’t without criticism though, with a 1,400 people running to Ofcom to complain, Channel 4 boss Alex Mahon had the perfect response as to why Jordan’s performance was so needed.

‘She’s trans and she stripped naked at the end of the performance and that was the first time, I think, really on mainstream television you see a trans body and what that looks like,’ she said.

‘That’s really important, it was a beautiful moment of trans expression. It was lovely.’

BBC presenter Alex Scott of course gets a mention in this list after she defiantly wore the OneLove armband live on air ahead of England’s World Cup game against Iran, after it was decided that captain Harry Kane would not wear the strap.

Alex, however, seized the opportunity to sport the rainbow symbol in the build-up to the Group B clash in Qatar, where homosexuality is illegal and punishable by a seven year prison sentence.

The armband, which is a symbol of inclusion and anti-discrimination, was due to be worn by Kane and the captains of six other nations before FIFA threatened punishment for doing so.

Emma Corrin used their platform to highlight the much-needed change for gender-neutral categories at major awards shows, such as the Oscars.

In recent years, it’s become apparent that ceremonies with gendered categories are becoming more and more outdated because they do not make room for those who fall outside of the gender binary.

While the Brit Awards scrapped male and female gongs last November, the Oscars and Baftas are yet to follow suit, and Corrin made the point that more needs to be done.

‘I don’t think the categories are inclusive enough at the moment,’ they said. ‘It’s about everyone being able to feel acknowledged and represented.’

When interviewed by BBC Radio 4’s Today, Emma, 27, argued more representation was needed in the entertainment industry to encourage ‘urgency’ around addressing the subject.

‘When it comes to categories, do we need to make it specific as to whether you’re being nominated for a female role or a male role?’ they said.

‘You can discuss awards and representation, but really the conversation needs to be about having more representation in the material itself.

‘The content that we are seeing for non-binary people, for queer people, for trans people – I think that will change a lot.’

Breakout Heartstopper star Yasmin Finney has had one hell of a year flying the flag for transgender representation on television.

The 19-year-old actress shot to fame in April in the coming-of-age Netflix series, in which she plays Elle Argent, a trans girl who has moved from an all-boys school.

Since then, she’s been using her platform for incredible things, including calling out the Conservative government at London Trans+ Pride.

In September, it was announced that she had been cast in David Tennant’s Doctor Who specials, making history as the show’s first major trans character, Rose.

When asked by British Vogue about what it means to be a trans actress cast in the huge sci-fi series, she replied: ‘It will change the world.’ And she’s not wrong.

Jayde Adams reminded us all that it’s okay not to put a label on our sexuality.

While many LGBTQ+ people may feel pressure to put themselves in a box for straight people to make sense of them, the comedian, who appeared on this year’s Strictly Come Dancing, stressed that we don’t have to do this if we don’t want to.

Following her exit from the BBC One show, Jayde, 38, defiantly said: ‘I don’t really like labelling myself. I think once you’re in a box, it’s very hard to get yourself out of that.

‘Harry Styles can be ambiguous about sexuality, so why can’t I? Who knows who I’ll end up with? I’ve been in all heterosexual relationships in my life, but as a lot of women are discovering now, perhaps there’s more to life than men…’

After taking inspiration from Tom Daly, Jake Daniels became the first male professional player in English football to come out as gay in 32 years in May.

The 17-year-old, who signed his first professional deal with Blackpool in February, bravely shared his sexuality with the world, stating ‘I just don’t want to lie any more’.

‘I know now is the time,’ Jake said. ‘I am ready to be myself, be free and be confident with it all. I can’t really put a date on it, but I was probably five or six years old when I knew I was gay.

‘So it’s been a long time that I have been living with the lie.’

Celebrities were quick to rally around Jake, including The Chase’s Paul Sinha, Eddie Izzard and Gary Lineker, with Tom also offering his love and support.

Laverne Cox made history in May when she was honoured with the first-ever Barbie doll modelled after a trans person.

The toy brand Mattel celebrated the Orange Is The New Black actress by launching a doll in her likeness to mark her impact as an advocate for LGBTQ+ rights as she turned 50.

‘I can’t wait for fans to find my doll on shelves and have the opportunity to add a Barbie doll modelled after a transgender person to their collection,’ she enthused at the time.

‘I hope that people can look at this Barbie and dream big like I have in my career.

‘The space of dreaming and manifesting is such a powerful source and leads you to achieve more than what you originally thought was possible.’

Olympic legend Dame Kelly Holmes come out as gay earlier this year, at the age of 52.

During her emotional announcement, the sporting icon said she realised she was gay when she was a soldier in the Women’s Royal Army Corps in 1988 at the age of 17, and kissed a female comrade.

She kept that part of herself hidden, however, out of fear of being prosecuted, since same-sex relationships were banned from the forces.

But, Dame Kelly said the Covid pandemic showed her that it was time to be her ‘real self’ and express who she is, after remaining closeted for decades.

Eddie Izzard constantly proved she is a force to be reckoned with in 2022.

The 60-year-old trans comedian and actor revealed in October her campaign to become a Labour election candidate as she launched her bid to become Sheffield Central’s MP.

When horrible and outdated transphobic comments were fired in Eddie’s direction, she handled them with grace and dignity and politely reminded her naysayers that trans people exist – and are not going anywhere.

‘Some people aren’t up to speed, some people haven’t joined the 21st century and, well, they’ve got to get on the bus now because I’ve been out for so long now that I don’t know why they didn’t bring this up before,’ she told PA.

‘It’s different now that I’m going for a parliamentary seat, but I don’t think bullying is a great thing to be happening and so I’m just going to carry on.’

She went on to say that the transphobia did not make her feel unwelcome to run as a candidate for the party. ‘Again, join the 21st century – trans people exist. I exist,’ she added.