LOS ANGELES — The New York backlot of Paramount Studios, where fake brownstones and townhouses mimic city streets, has been invaded by aliens before. But it has never seen anything quite like the bright green serpent that winds all the way from a “SoHo subway station” up through several apartment windows.

The snake isn’t scary — but has alarmingly low production values, being handmade out of papier-mâché and studded with colorful aquarium pebbles. And the artist behind it, Trulee Hall, has underscored the unsophisticated nature of her beast in an accompanying claymation video, complete with that horror-movie trope of a screaming woman in a bathtub.

“I love the fakeness of it all,” Ms. Hall said cheerfully this week on the SoHo set, where Paramount workers on a cherry picker were securing the creature, which she called “phallic and umbilical,” to the fire escape of a cast-iron building. “The entire Paramount lot is beautifully fake in a really safe way, like an adult Disney World.”

Now it’s about to become an amusement park of another sort — for art collectors. 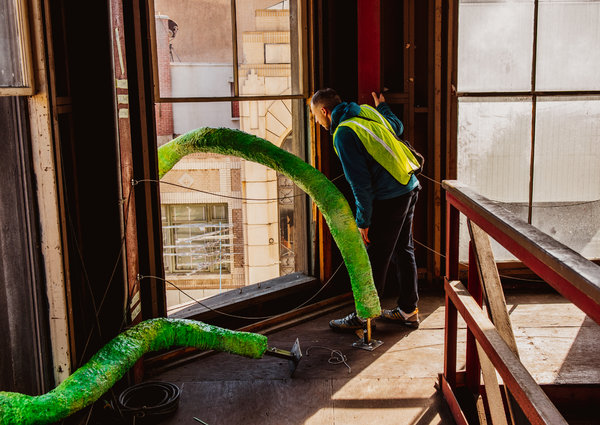 Ms. Hall’s work is one of 16 artist projects commissioned for the debut edition of Frieze Los Angeles, taking place at Paramount from Feb. 15 to 17. A group of art fairs started by the publishers of an art magazine in 2003 in London, Frieze has long been known for its curated projects as well as its customized gallery tents. The L.A. edition has both, with a tent behind the artist projects designed by the architect Kulapat Yantrasast, of the firm wHY, that will house 70 galleries, from homegrown L.A. success stories like Regen Projects and David Kordansky to international powerhouses like Hauser & Wirth and Pace. (Still, this iteration is less than half the size of Frieze’s London or New York editions.)

The hope is that the novelty of this setting will help the fair succeed where others have failed. In 2011, the organizers of New York’s Armory Show held an L.A. fair downtown; it survived only two years. A spinoff of Paris Photo, also at Paramount, lasted three. But Frieze Los Angeles has already generated more momentum than those events, with five smaller fairs piggybacking on it and more than three dozen museum-affiliated collector groups flying into town.

Victoria Siddall, director of Frieze Fairs, thinks the timing is finally right. “It’s similar to the situation in London when Frieze launched there,” she said. “L.A. has all the ingredients that make it a city you want to visit: museums, galleries, artists living here, art schools. The only thing missing was one moment when everyone wanted to come.”

Her colleagues at the talent agency Endeavor, an investor in Frieze, suggested the Paramount location. “It was because of the location that I couldn’t say no,” said Ali Subotnick, a former Hammer Museum curator who has organized the 16 new artist projects. “I loved the idea of working out in the real world, out of the white cube, out of the white tent, though of course this has an extra layer because it is a fake world within the real world.”

Just around the corner from Ms. Hall’s serpent, Cayetano Ferrer has installed on an exterior brick wall an assemblage of neon signs bought from a Burbank prop shop. He superimposed “Sin Club” on “Legal Charity” and “Adult Movies” on “Kids Games.” Together the signage forms a head-like shape that nods to Freud’s classic diagram of the human psyche. “I’m using the language of this prop city to make a concrete poem,” he offered.

His sculpture had been moved last minute to a more protected location because of forecasts of rain. But otherwise Ms. Subotnick didn’t sound worried. “The artists knew to make their works weatherproof and waterproof,” she said. “And the interiors of the brownstones stay dry.”

Sarah Cain’s installation could seem cozy even on a bleak day. She has taken over the shallow interior of a New York-style brownstone, painting doors, floors and even a sofa where visitors can sit, as well as hanging canvases and installing a stained glass artwork in the window. She worked with andSons Chocolatiers of Beverly Hills to create an Earl Grey-infused, vegan dark chocolate that she plans to serve throughout the preview period on Thursday, the preview day, and offer around teatime after that.

Nearby, Lisa Anne Auerbach is also making a participatory work, creating “Psychic Art Advisor” as a shop in a brownstone marked by a neon sign in the window where those words flash in different combinations. She has brought in the performer Estela Sanchez, also known as Alpine Moon, to serve as the spiritual-aesthetic guide.

“I was thinking about the overlap between psychics and art advisers,” Ms. Auerbach said, sitting in an Eames office chair that was meant to signal the moneyed art-world presence and holding tarot cards she made for the occasion. “The shops are often run by women,” she explained. “They are often sole proprietorships, and they may be unlicensed or unaccredited — they can just put a shingle out.” She added, “We’re hoping people come in with questions about collecting, curating and creativity.”

Kori Newkirk’s work “Signal” also touches on cosmic communication. He has planted on city sidewalks two spiky sculptures, each made of old-school television antennas bunched together at the end of a pole. Looking like robotic hands, the obsolete technology now seems futuristic. “I was born analog, but I will die digital and my experience is of both,” the 48-year-old artist said.

As the antennas of one sculpture swayed close to a window during installation, Mr. Newkirk told a grip, “We can definitely bend them to get that thing snug.” A few minutes later he said in a stage whisper: “I actually wouldn’t mind breaking a window. It would give more fake-real authenticity to this fake-real place.”

Friday through Sunday at Paramount Studios in Los Angeles; frieze.com. 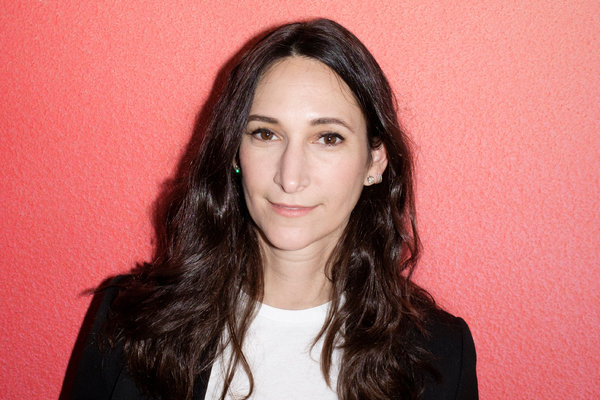 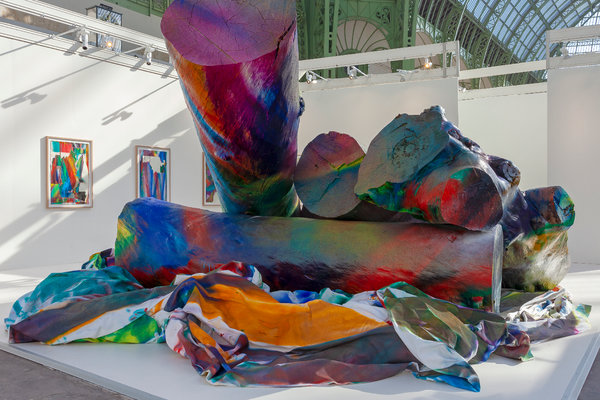