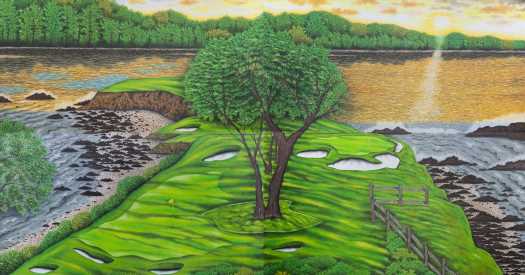 Valentino Dixon served more than 26 years in prison for a murder in Buffalo, although another man had publicly confessed to the crime. Encouraged by his uncle to use his childhood artistic talent to help cope with his incarceration, Mr. Dixon began drawing, up to 10 hours a day, for the last 20 years he spent behind bars. He used vibrantly colored pencils to create imagined golf courses, inspired by magazine pictures of a game he had never played.

“The peace and tranquillity of the golf took my mind to another place,” said Mr. Dixon, who was released from Attica Correctional Facility in 2018. “Prison is a dark place and drawing became a survival tool.”

The drawings also became the pathway to his freedom. After he sent some to Golf Digest, which published an article about him, media interest led Georgetown University undergraduates to help persuade officials to reopen his case. Mr. Dixon walked out of prison with more than 900 drawings. He continues to draw 10 hours a day, and his work has sold for as much as $30,000.

“The Pencil Is a Key,” opening on Oct. 11 at the Drawing Center in SoHo, explores the many ways that artists have used drawing to envision their freedom during periods of incarceration. It is the first exhibition conceived there by the museum’s new director, Laura Hoptman, who took the helm last fall, and sets the tone for her curatorial vision.

“This kind of exhibition cuts to the core of that connection between art and life and argues for the possibility of drawing to be a kind of lifeline and something that can help us define ourselves as human,” she said. 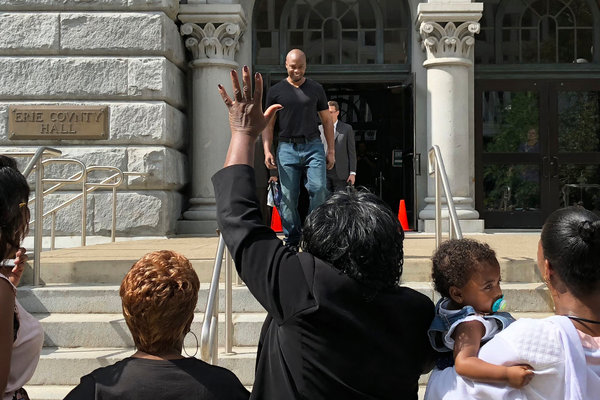 The show reflects the art’s world’s increasing attention to the issue of mass incarceration. Responding to systemic inequities in the United States criminal justice system, the philanthropist Agnes Gund created the Art for Justice Fund in 2017, which to date has committed $43 million in grants to activists and artists working on policy reform. A spate of recent exhibitions, including one at the Aldrich Contemporary Art Museum in Connecticut, and “Mirror/Echo/Tilt,” which is at the New Museum through Oct. 6, have held the prison experience up to the light.

Drawing has been the primary artistic mode of expression for prisoners, given the accessibility of materials. But framing this subject for a general audience has potential pitfalls, said Nicole Fleetwood, professor of American studies and art history at Rutgers University and author of the forthcoming book “Marking Time: Art in the Era of Mass Incarceration.”

“It’s really hard to get people to think differently about those who are in prison, broadly seen in some of the most negative terms,” Ms. Fleetwood said. She added that the public was generally uninterested “in what happens to people in prison.”

The curators of the Drawing Center’s exhibition, which mixes political prisoners with others convicted of wide-ranging crimes, have struggled with questions of innocence and guilt and how to present enough information about the artists to provide context without casting judgment. Ms. Hoptman enlisted her entire curatorial team, including Claire Gilman, Rosario Güiraldes, Isabella Kapur and Duncan Tomlin, in the research and loans of some 140 drawings produced by more than 80 artists during various forms of captivity, dating from the French Revolution to the present.

“What we have been most interested in is how one uses drawing when one is unfree,” Ms. Hoptman said. The work in the show is by those who were practicing before their incarceration and by those who became artists during confinement and continued after their release. “This is people who understood that they were making art,” Ms. Hoptman said, drawing a distinction between their work and that made in therapeutic or educational prison programs. “It makes the look of the show different than other exhibitions focused on prison art.”

Moving chronologically across more than 200 years, the show includes extraordinary caricatures by Honoré Daumier, imprisoned in 1832 for making a satirical image of King Louis Philippe, and a delicate chalk study of the prison cell and young cellmates of Gustave Courbet, jailed in 1871 when he was accused of complicity in tearing down the Vendôme Column, a symbol of the French monarchy.

Curators also gathered ledger drawings from the late 19th century by leaders of Southern Plains Indian tribes who were imprisoned by the United States military at Fort Marion in St. Augustine, Fla. About a third of the 72 Native Americans there, including Ho- na-nist-to, known as Howling Wolf, used accountants’ lined ledger books acquired in trade to record vivid scenes of cultural confrontation, evocative of traditional Plains hide painting.

Before Ruth Asawa became known for her biomorphic wire sculptures, she and her family were part of the United States government’s mass internment of Japanese-Americans during World War II. As a teenager, Asawa studied with Walt Disney animators who were incarcerated with her and made spirited watercolors depicting daily life in the internment camp.

The show encompasses drawings produced by artists in Soviet forced-labor camps from the 1920s to the ’50s; in Latin America during dictatorships in the 1970; at Guantánamo Bay and in the American penal system.

Azza Abo Rebieh, a Syrian artist imprisoned in 2015 for her activism by the authoritarian government of President Bashar al-Assad, described drawing as a form of resistance. “For 70 days in the security branches, there was nothing that made me feel like a human being,” said Ms. Abo Rebieh, who is now living in exile in Lebanon. “When I started drawing in prison, I believed that I am still alive.”

Her beautifully rendered portraits of young women with whom she was incarcerated were also a kind of gift. “It empowered the other women by showing them how pretty they are,” Ms. Abo Rebieh said.

The Kurdish artist and journalist Zehra Doğan has been incarcerated several times since 2016 for her painting and reporting deemed critical of the Turkish government. After her art was confiscated and she was denied paper to draw on, Ms. Doğan fashioned glorious dresses from bedsheets and a tablecloth she scooped up in prison, and from head scarves and underwear her mother brought on visiting days. She embellished them with embroidery, ballpoint pen drawing, tomato paste and coffee, and her mother smuggled them out.

Drawing gave hope as well to Jose Alvarez. Born Deyvi Orangel Peña Arteaga in Venezuela, where he fled homophobic persecution in 1984, Mr. Alvarez changed his name after accepting false identity papers. He had a career in the art world (and was included in the 2002 Whitney Biennial) before being picked up for immigration violations in 2012. Another detainee encouraged the artist to ward off depression by drawing his portrait. This attracted the attention of others, who asked to be drawn.

“There was a circle of guys telling me all the stories of the reasons they came to this country,” said Mr. Alvarez, who over the course of his two-month incarceration made more than 30 portraits in pen on legal pads and wrote short biographies of his subjects.

“For me, it was a way of keeping sanity, but in the end it also became something they could hang onto and were cheering for me to present somewhere,” said Mr. Alvarez, who lives in Fort Lauderdale, Fla., and is married to the renowned magician James Randi, known as the Amazing Randi.

The portrait grouping was shown in its entirety at the Boca Raton Museum of Art, and four works are included at the Drawing Center.

Still to be determined is whether the incarceration story has an impact on the public’s view of these drawings — especially in the #metoo era, when many people are less willing to separate the art from the artist.

The self-taught artist Adolf Wölfli, for instance, was arrested multiple times for attempted sexual assault of minors before being institutionalized in 1899 with schizophrenia. Does that affect how we look at his work, which maps the geography of his alternate imagined universe?

Mr. Alvarez himself admitted to identity theft but said that he hadn’t known that the real Jose Alvarez was still alive. The judge showed him leniency.

Ms. Fleetwood, the art professor, who has contributed an essay to the show’s catalog, said the Drawing Center was trying to “create more space for people to view the work and think about the overlapping considerations that take place in these different institutions.”

Where Ms. Hoptman said she was comfortable making judgments was about the drawings themselves — some great, some strange and interesting, but all with a moving quality.

“We aren’t experts on mass incarceration, nor are we ethicists,” Ms. Hoptman said. “All we are are art curators who have an expertise in drawing. That’s how we can best contribute to this discussion about incarceration — especially in this country, where it’s so important to talk about this right now.”

The Pencil Is a Key: Drawings by Incarcerated Artists 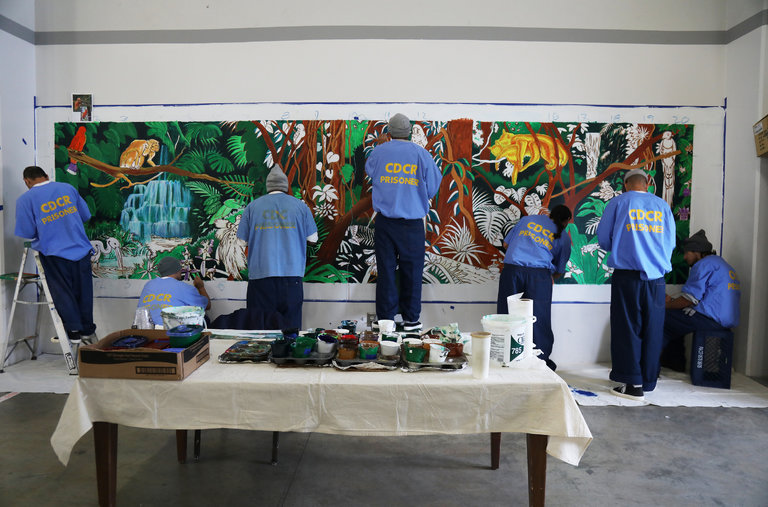 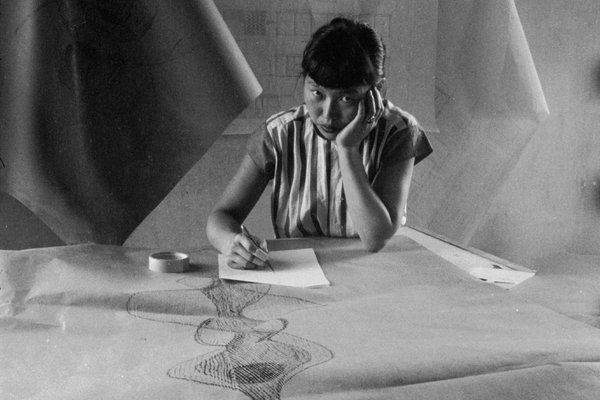