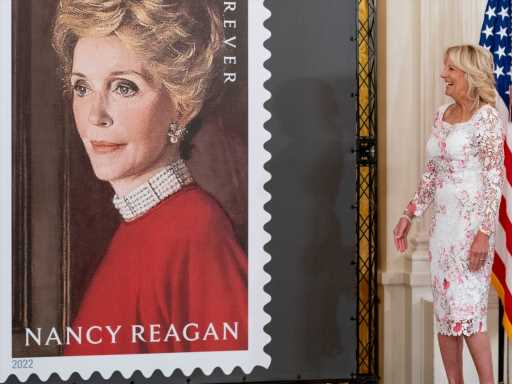 When LGBTQ+ Americans think about Pride Month, the Ronald Reagan administration is not the first thing that comes to mind. During his years in office, the former president spent years denying funds and research to gay men affected by the AIDS crisis. So, it’s curious that the Biden administration thought June was a swell month to honor former First Lady Nancy Reagan on a postage stamp.

That’s what First Lady Jill Biden did on Monday, June 6, saying Nancy “served the American people with grace” during the ceremony. “She understood that the role of first lady came with inherent pitfalls and scrutiny, yet she found the humanity in it all,” Jill added. If you’re thinking that Nancy doesn’t represent her husband’s policies while he was in the White House, think again. She turned down friend Rock Hudson’s request to get transferred to a French military hospital while he was dying from complications from AIDS. The actor had been at an American hospital in France and needed the request from the White House in order to make the transfer happen. So no, Nancy didn’t have a more compassionate stance than her husband on the AIDS epidemic, even for an old Hollywood pal.

It’s hard to believe that not one person in the Biden administration posed the question about doing the unveiling another month — July or August for better optics? Instead, the first lady’s office told the HuffPost the ceremony was timed to the opening of a new building. “This ceremonial postage stamp unveiling was timed to commemorate Mrs. Reagan’s centennial and was scheduled the day before the opening of the Ronald Reagan Institute building in D.C.,” Michael LaRosa, the press secretary for the first lady said in a statement.

LaRosa then doubled down on the Bidens’ “long and proud record of supporting, fighting for, and leading on, LGBTQ+ rights, and those living with HIV/AIDs.” While it’s admirable to take a strong stance on LGBTQ+ rights, that should also include not being tone deaf to honoring others who have a less-than-stellar role in the AIDS crisis and the death of so many young gay men.

Before you go, click here to see our favorite photos of President Joe Biden’s big family.