Sarah Ferguson is sticking up for her son-in-law Jack Brooksbank.

Brooksbank, who is married to Ferguson’s daughter Princess Eugenie, works as a brand ambassador for the tequila line Casamigos.

The 35-year-old was recently photographed with several women in swimwear, one of whom was topless, while he was apparently on a work trip aboard a yacht in Capri, Italy. Photos of the outing began to cause a stir online, which prompted the Duchess of York to speak up on Brooksbank’s behalf during a recent media appearance on BBC One.

“[Jack] is a man of such integrity,” Ferguson, who is no stranger to scandal herself, said Monday on “The One Show.”

“He’s just one of my most favorite people; I call him James Bond, actually. He’s just a superhero in my book,” the Duchess of York added. “And he’s a great father, fabulous husband and he’s never at front of house, he always likes to be at the back.”

“And so for them to make this story, [which] is, in fact, of course, completely fabricated, he works as an ambassador for Casamigos, and, you know, he was doing his job,” she explained. “And so I think it’s really important that we just clarify that for Jack’s sake.” 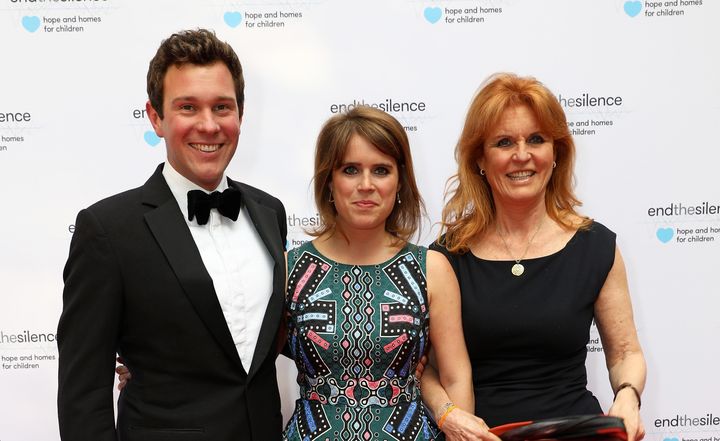 Brooksbank and Princess Eugenie were married on Oct. 12, 2018, at St. George’s Chapel at Windsor Castle after seven years of dating. They tied the knot in front of 850 guests, though millions more around the globe watched the televised service.

The couple recently welcomed their first child, a son named August Philip Hawke Brooksbank, earlier this year. They later posted the first photos of their little one on Eugenie’s Instagram account:

Eugenie recently posted a gushing tribute to her husband in June to mark his first Father’s Day.

“Happy Father’s Day to you my love.. you are the ultimate father to our boy!!” she wrote alongside four photos of Brooksbank with baby August.

Ferguson, whose first historical romance novel, “Her Heart for a Compass,” comes out Tuesday, has made headlines throughout her book tour.

She’s continued to call her ex-husband Andrew “a good man” despite the prince’s friendship with convicted sex offender Jeffrey Epstein (though the duchess has ties of her own to Epstein).

Fergie has also spoken to the media about being pitted against Princess Diana in the tabloids, given her thoughts on the Duke and Duchess of Sussex, divulged that “The Crown” turned down her offer to consult for the series and claimed that she wasn’t “worthy” enough to attend Prince William and Kate Middleton’s 2011 nuptials.