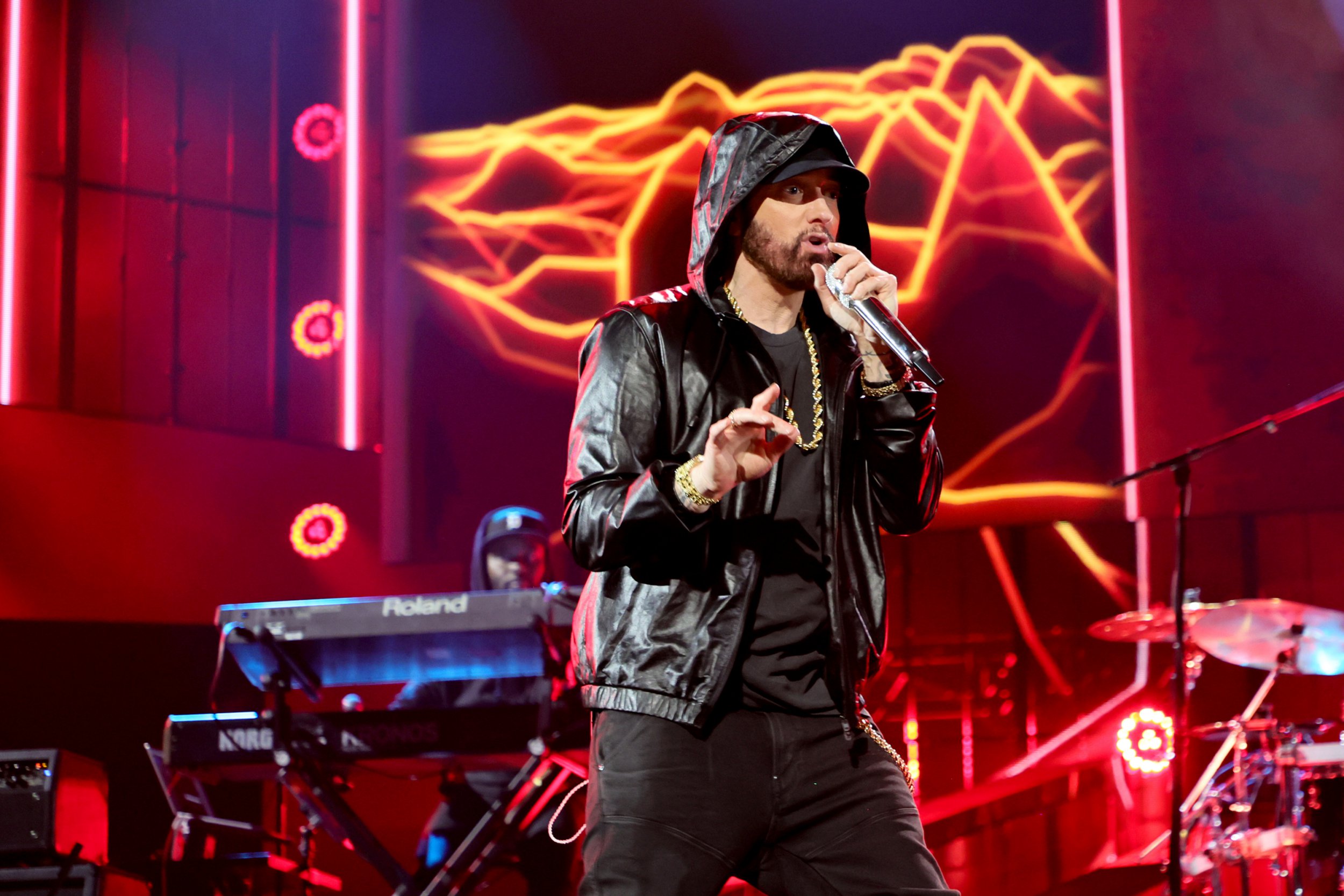 Eminem wasn’t about to get inducted into the Rock & Roll Hall of Fame without a bang.

The iconic rapper was welcomed to the stage by his close friend, Dr Dre, who told the story of how he discovered the star.

‘Over 20 years ago, Jimmy Iovine played a demo tape for me from a guy who called himself Eminem. The first thing I said when I heard it was “What the f**k did he just say?”‘ the Still D.R.E rapper recalled.

‘Eminem flipped hip hop on its head. While forcing us to confront our own biases, growing not only the genre but all of us along with it.’

Eminem then took to the stage at Los Angeles’ Microsoft Theater to the hook of his hit My Name Is…, before giving a sensational performance of his record-breaking hit Rap God.

He brought out friends aplenty, including Aerosmith’s Steven Tyler to sing Dream On (the song Eminem sampled for his track Sing For The Moment), and Ed Sheeran to sing the chorus on the rapper’s hit Stan (sampled from Dido’s Thank You).

Eminem went solo for the end of the show, performing his verse from Drake’s Forever, before finishing up with his hit Not Afraid.

Giving his acceptance speech, he said: ‘This s**t is crazy. I realise what an honour it is for me to be up here tonight and what a privilege it is to do the music that I love and the music that basically saved my life.’

He paid tribute to his biggest influences, including The Notorious B.I.G, 2Pac, Ice Cube and LL Cool J, adding: ‘Those were my rock stars. Those are just a few of the names I hope will be considered in the future for induction because without them a lot of us wouldn’t be here.’

More than 20 years after he first rose to fame, Eminem is still smashing it, performing alongside Dre, Snoop Dogg, Mary J Blige, Kendrick Lamar, and 50 Cent for the 2022 Super Bowl halftime show.

Most recently, it’s been reported that he’s in talks to headline Glastonbury 2023.

The 49-year-old rapper is reportedly set to join The Arctic Monkeys as a headliner on the Pyramid stage next summer.

A source revealed: ‘Eminem is wanted for a huge slot at Glastonbury and has been in talks for yonks.

‘His dates all line up and if they can get him on board, it will be the first time he has ever played at the festival.’

The insider continued to The Sun newspaper’s Bizarre column: ‘Eminem is one of the greatest rappers on the planet and to have him down on the farm would be incredible.’