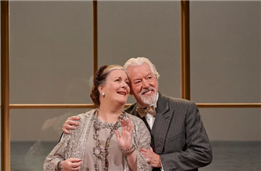 The Abbey Theatre’s mission includes exploring the repertoire, and this Lennox Robinson play from 1933 has endured a number of recent problematic revivals. It is a deceptively simple-looking crowd-pleaser, with the laughs being obvious on the page, and thus one might think, easy to achieve on the stage. But it’s difficult to get the tone right, without it all looking like a stage-Irish stew.

It is not necessary to make a classic relevant to the contemporary moment, though most directors do tend to do this. Otherwise, why revive the play at all? Instead, director Cal McCrystal has moved the action from the 1930s to the 1960s, but it’s hard to see what this is supposed to yield, apart from colourful costumes.

Hector De la Mare (Nick Dunning) and Constance Constantia (Marion O’Dwyer) visit the seaside town of Inish, bringing their repertoire of challenging Ibsen and Chekhov plays to the local stage. They are hosted by John Twohig (Mark O’Regan) and his wife Annie (Helen Norton) who own the hotel and the local theatre. These European psychological plays have a disturbing effect on the town, causing husbands to threaten wives, and couples to make suicide pacts. The essence of Lennox’s satire is that the visiting theatrical troupe disrupts the everyday and provokes outbreaks of heightened emotion.

But the pitch is raised so high from the very beginning, the performances of the townsfolk have nowhere to go. They just seem hopelessly exaggerated. Aoibhinn McGinnity as Lizzie Twohig does manage to capture the repressions of small-town Irish life, but she strangely doesn’t change fully, until the curtain call. That is, after the play has finished.

The directing energy and effort all seem to have gone into bits of stage business, non-lighting matches and seagulls flapping outside the window while hats blow off. Set designer Sarah Bacon provides a fine setting for these window japes. Much of this funny business is enjoyable, but it should be an added layer on top of the psychological comedy, rather than a substitute for it. Only Dunning and O’Dwyer as the colourful thespians emerge with their dignity intact, he clutching his ornamental cane, she the whiskey decanter.

The opening incorporates three strikes of a gong, a nod to an old Abbey tradition, signalling this production’s purpose as a show of respect to the repertoire. But deciding to explore the Irish canon is a different matter than having a vision for a particular play. And that gong strikes a dud note.

Paris Might Be the Best City for Italian Food (Outside Italy)

Chessington World of Adventures: Get two FREE tickets worth over £100 with Sun Superdays
Lifestyle News

Jason Biggs new Fox sitcom ‘Outmatched’ is lousy, but these other shows aren’t

Lizzo goes near nude in stunning Rolling Stone cover surrounded by shirtless men
We and our partners use cookies on this site to improve our service, perform analytics, personalize advertising, measure advertising performance, and remember website preferences.Ok