Douglas Crimp, a groundbreaking art scholar, curator, writer, editor, educator and AIDS activist who challenged the field of art history by insisting on seeing it in a social context, died on July 5 at his home in Manhattan. He was 74.

Rosalyn Deutsche, an art historian and friend, said the cause was multiple myeloma.

In his writing, lectures and curating, Mr. Crimp made it his hallmark to disrupt conventions in contemporary art criticism. As curator of the seminal “Pictures” exhibition at the Artists Space gallery in Lower Manhattan in 1977, he explored the idea that the meaning of a work of art is dependent on its historical and social circumstances.

As editor of the influential contemporary arts journal October, published by MIT Press, he wrote landmark texts that challenged the notion of the museum as a neutral power in presenting art.

Mr. Crimp was an early advocate for the revolutionary advances in performance art, dance, video and photography that emerged in the 1970s and ’80s. In 1971, he was there when Joan Jonas presented “Choreomania,” a performance art piece using a moving, mirrored wall, in her SoHo loft; in 1973, in the West Village, he saw the dancer and choreographer Yvonne Rainer perform “Trio A,” a music-less piece featuring everyday movements like toe tapping, walking and kneeling.

At the same time, he was experiencing Downtown Manhattan as a site of gay liberation, dancing at Gay Activists Alliance parties in an unused firehouse on Wooster Street and cruising in the empty pier buildings along the Hudson River.

In his writing, Mr. Crimp reflected on how the two cultures in which he moved — the alternative art world and the liberated gay one — functioned like a two-way mirror.

“Those two aspects of New York life at that time, which were so much a part of me, are not talked about very much in the same space,” he said in an interview in 2016.

The artist and writer Gregg Bordowitz said in a phone interview, “It’s important to recognize that in the late ′70s and early ′80s, being out as a gay person in academia was still a very difficult thing to do.”

When the AIDS crisis threatened the gay community, Mr. Crimp fought for the rights and visibility of people living with H.I.V. In 1987, he edited a special issue of October entitled “AIDS: Cultural Analysis/Cultural Activism.” It was a bold rupture with the journal’s usual subject matter. Offering material like a glossary of AIDS terms, a first-person account about living with H.I.V. and the voices of sex workers, it became the best-selling issue in the journal’s history.

“I wanted to talk about all of the issues of culture and representation that were raised by AIDS,” Mr. Crimp said in a 2007 oral history produced by Act Up, the advocacy group formed in response to the AIDS crisis.

Mr. Crimp approached art with a kind of personal investment. “His work came directly out of his life: what he loved doing, what he worried about,” Darby English, an art history professor at the University of Chicago and a former student of Mr. Crimp’s, said in a phone interview. “Living was working, and life was good as long as he could work.” 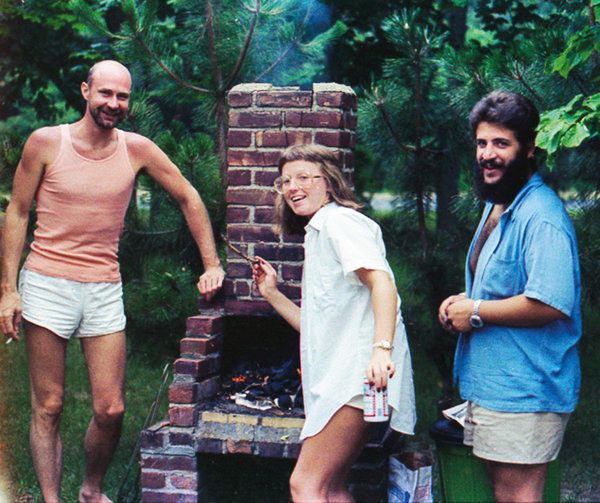 Even when he knew that his illness gave him limited time, Mr. Crimp finished a new essay for a book of collected writings, “Dance Dance Film,” to be published next spring.

John Douglas Crimp was born on Aug. 19, 1944, to Doris and John Carter Crimp, and grew up, mostly unhappily, in Coeur d’Alene, the lakeside city in northern Idaho.

“It was very difficult, growing up in the ’50s in Idaho, being gay, being a sissy, I guess,” he said in the oral history. “It was jock culture; it was incredibly conformist culture.”

He escaped that world in 1962 with a scholarship to Tulane University in New Orleans, where he studied art history and graduated in 1968. He then moved to New York, where he would live for the rest of his life.

Mr. Crimp’s first job in the art world was as a curatorial assistant at the Solomon R. Guggenheim Museum. He also began teaching at the School of Visual Arts in Manhattan and, in 1973, writing reviews for ARTnews and Art International.

At the time, New York City was mired in economic crisis and factories were abandoning their loft buildings in Lower Manhattan. Drawn by the large spaces and low rents, artists moved in, using these spaces for performance, dance and filmmaking. Galleries followed. Mr. Crimp moved into a TriBeCa loft in 1974.

In 1976 he enrolled in the City University of New York Graduate Center, joining the only doctoral program in contemporary art criticism being offered in the United States at the time. His adviser was the influential art historian Rosalind Krauss, who founded the journal October that same year. Mr. Crimp joined its editorial staff early on, rising to managing editor in 1978 and executive editor in 1983.

It was during this period that he curated the “Pictures” exhibition, gathering the work of young artists who were defying media and beginning to scrutinize mass media imagery by using, as Mr. Crimp put it, “processes of quotation, excerptation, framing, and staging.” Among the artists were Sherrie Levine, Robert Longo, Troy Brauntuch, Jack Goldstein and Philip Smith.

“What was so important about ‘Pictures’ is that it was a representation itself,” Ms. Deutsche said in a phone interview.

In Mr. Crimp’s essay for the show, also titled “Pictures,” he critiqued the modernist doctrine in art criticism, finding it prescriptive rather than open to what new artists were making.

“He had an extraordinary gift for spotting disturbances in the field of art and causing them when necessary,” Professor English said.

In 1990 Mr. Crimp was, in his own words, “pushed out” of October when his fellow editors refused to publish essays from a conference on queer film and video. “I think there was homophobia involved,” Ms. Deutsche said.

Mr. Crimp’s departure was painful for him, colleagues said. “For him, they were drawing battle lines around AIDS and activism and cultural studies,” said Rachel Haidu, a professor of art history at the University of Rochester.

Two years later, Mr. Crimp became a professor of art history and visual and cultural studies at Rochester. He was later a director of the program. His writings critiquing art institutions were collected in “On the Museum’s Ruins” (1993), an experimental collaboration with the photographer and conceptual artist Louise Lawler.

After Mr. Crimp left October, colleagues said, he felt freer to write with more radical subjective insight, as he did in discussing queerness in the films of Andy Warhol in “ ‘Our Kind of Movie’ ” (2012), a collection of essays. “His writing changed with him,” Mr. Bordowitz said. “He just developed a more effective style of oppositional writing.”

Mr. Crimp’s most recent book was “Before Pictures” (2016). Part art criticism, part memoir, it chronicles his life as a young gay man and critic in New York in the 1960s and ’70s.

His pursuit of these pleasures propelled him to attend cultural events almost every night — art, ballet, fashion, film — at any venue, alternative or established.

His long illness gave him time to think about his legacy — he placed his papers at the Fales Library and Special Collections at New York University — and his death. Ms. Deutsche said he had read extensively on the topic and oversaw the details of his burial.

He is survived by his spouse, Yoshiaki Mochizuki; a sister, Sandi Bloem; a brother, Gregg; and a number of caretakers.

In his final months he wanted to learn to appreciate poetry. His friends collected and compiled their favorite poems, from which they would read to him.

“What was very remarkable for all of us who have taken care of Douglas in the years of his illness was his opening to new things,” Ms. Deutsche said. “In a way, it was as though as his body was dying, his spirit or his heart was opening and growing.”

Mr. Crimp wrote about mourning in a 1989 essay on the destructive effects of AIDS and political sloganeering calling for organizing and not grieving. “Mourning is a psychic process that must be honored,” he wrote.

He acknowledged the violence that society had inflicted on the gay community, but he also counseled: “We may also be able to recognize — along with our rage — our terror, our guilt and our profound sadness. Militancy, of course, then, but mourning too: mourning and militancy.”