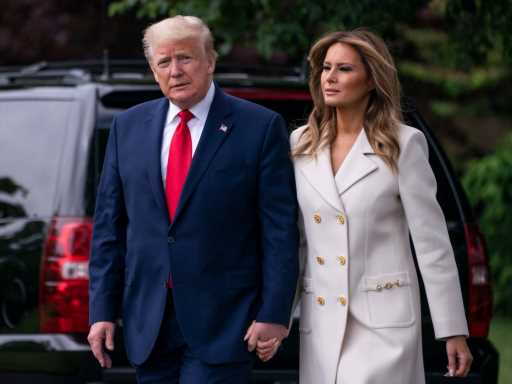 It’s a time-honored tradition for former presidents and first ladies to commission an artist to paint their portraits to reside in the National Portrait Gallery at the Smithsonian in Washington, D.C. In 2018, the paintings of Barack and Michelle Obama were unveiled, and now, it’s time to get started on Donald and Melania Trump’s portraits.

Of course, like anything with the Trump family, the way the money was raised is unusual compared to other former presidents. His political action committee (PAC), Save America, gave what it deemed a “charitable contribution” to the Smithsonian for $650,000, according to Business Insider. They disclosed this itemized budget item to Federal Election Commission and explained that it covers “the artists’ fees, shipping, framing, installation, and events,” Smithsonian spokesperson Linda St. Thomas told the media outlet.

The museum’s rep also revealed that “one additional private donation” in the amount of $100,000 came from “a family,” who are obviously big fans of Donald and Melania Trump. They remain anonymous, for now, but St. Thomas added, “Two artists have been commissioned, one for each portrait. The names will be released closer to the reveal of the paintings. The creation of the portraits is underway. The timing of the artworks’ reveal is not determined yet.”

Barack and Michelle Obama’s $750,000 portraits were also paid for by private donations from over 300 people, including some A-list celebrities like Steven Spielberg, John Legend, and Chrissy Teigen. With the Trumps using a PAC to cover a majority of the fees, there will likely be more headlines about the portraits as the Smithsonian gets closer to the unveiling — and possibly the disclosure of the family that graciously gave the additional amount to bring their paintings to life.

Before you go, click here to see photos of Donald Trump’s family over the years.