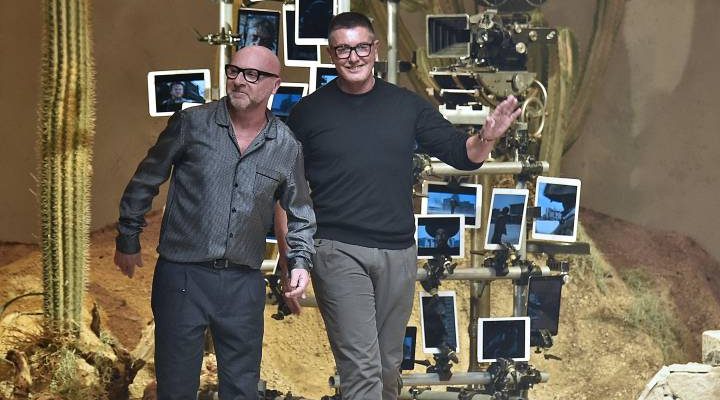 Dolce & Gabbana cancelled a fashion show in Shanghai on Wednesday after a series of advertisements for the brand, in which a Chinese woman struggles to eat pizza, a cannoli and spaghetti with chopsticks, drew condemnation from Chinese celebrities and many people on social media.

The controversy was the number one topic on China’s Twitter-like Weibo platform, with more than 120 million reads by mid-afternoon, as celebrities, including Memoirs of a Geisha movie star Zhang Ziyi, posted critical comments about the brand.

Many users said they were annoyed by what they considered the patronizing tone of the narrator in the “Eating with Chopsticks” campaign.

On Wednesday, the company abruptly cancelled the runway show scheduled for later in the day in Shanghai, apologized and blamed the posts on a hack.

Each video posted to the social media account depicted a model trying to use chopsticks to eat Italian food with subtitles in the Chinese language.

#DGlovesChina ? More like #DGdesperateforthatChineseRMB lol.  In a bid to further appeal to luxury's covetable Chinese consumers, @dolcegabbana released some hella offensive “instructional” videos on the usage of chopsticks.  Pandering at it's finest, but taken up a notch by painting their target demographic as a tired and false stereotype of a people lacking refinement/culture to understand how to eat foreign foods and an over-the-top embellishment of cliché ambient music, comical pronunciations of foreign names/words, and Chinese subtitles (English added by us), which begs the question—who is this video actually for?  It attempts to target China, but instead mocks them with a parodied vision of what modern China is not…a gag for amusement. Dolce & Gabbana have already removed the videos from their Chinese social media channels, but not Instagram.  Stefano Gabbana has been on a much-needed social media cleanse (up until November 2nd), so maybe he kept himself busy by meddling with the marketing department for this series. Who wants to bet the XL cannoli “size” innuendos were his idea? Lmao. • #dolceandgabbana #altamoda #rtw #dgmillennials #stefanogabbana #shanghai #chinese #italian #cannoli #meme #wtf #dumb #lame #chopsticks #foodie #tutorial #cuisine #italianfood #asianmodel #asian #chinesefood #dietprada

One of the messages said that the videos were posted “by my will.” And another message complained of a “China Ignorant Dirty Smelling Mafia,” according to the screenshot.

As @dolcegabbana prepares to mount their next runway show in Shanghai this coming evening (7:30PM) and the rest of Instagram fawns over what’s sure to be an overly lavish “love letter” to China, we’ll be wondering if we’ll see chopsticks as hair ornaments, take-out boxes as purses, or even kimonos misappropriated as Chinese costume. Time will tell. For now, we’ll let y’all simmer on this DM between Stefano and Dieter @michaelatranova (chronology is reversed in slides). Word has it that they’re still in the process of model casting (over 200 Asian girls scheduled)…wouldn’t let them walk the show if we were their agents lol. Also, curious what the Chinese government will think of their country being called shit basically…especially considering how strict they are on who to allow to enter the country on work visas based on a thorough social media background checks. • #DGTheGreatShow #DGlovesChina #runway #fashionshow #cancelled #racism #dolceandgabbana #altamoda #rtw #dgmillennials #stefanogabbana #shanghai #chinese #china #wtf #dumb #lame #asianmodel #asian #dietprada

In a statement, Domenico Dolce & Gabbana said: “Our dream was to bring to Shanghai a tribute event dedicated to China that tells our story and vision. It was not simply a fashion show, but something that we created especially with love and passion for China and all the people around the world who loves [sic] Dolce & Gabbana. What happened today was very unfortunate not only for us, but also for all the people who worked day and night to bring this event to life. From the bottom of our hearts, we would like to express our gratitude to our friends and guests.”

“Our Instagram account has been hacked. So has the account of Stefano Gabbana,” the fashion house said on Wednesday. “Our legal office is urgently investigating. We are very sorry for any distress caused by these unauthorized posts. We have nothing but respect for China and the people of China.”

Gabbana posted a photo of the alleged conversation that came from his hacked account.

“My Instagram account has been hacked. My legal office is working on this. I love China and the Chinese Culture. I’m so sorry for what happened,” he wrote.

My Instagram account has been hacked. My legal office is working on this. I love China and the Chinese Culture. I’m so sorry for what happened.

According to Jing Daily, the online videos were initially posted Saturday on Dolce & Gabbana’s Weibo.

Many people on social media called for a boycott of Dolce & Gabbana and said the brand’s explanation was not enough.

Chinese-French model Estelle Chen, who withdrew from the show, called the actions “disrespectful and racist.”

“You don’t love China, you love money,” she wrote. “China is rich yes but China is rich in its values, its culture and its people and they won’t spend a penny on a brand that does not respect that.”

To @dolcegabbana and @stefanogabbana

In 2016, the fashion brand was criticized on social media for releasing a design that was named “Slave Sandal.”

In 2012, over 1,000 protesters gathered at Dolce & Gabbana’s Hong Kong stores after security guards attempted to stop locals from taking photographs. The brand apologized.

“We understand that the events which unfolded in front of the Dolce & Gabbana Boutique on Canton Road have offended the citizens of Hong Kong, and for this we are truly sorry and we apologize,” a spokesperson for the Italian fashion house told Vogue. “The Dolce & Gabbana policy is to welcome the Hong Kong people and that of the whole world respecting the rights of each individual and of the local laws.”

—With files from Reuters