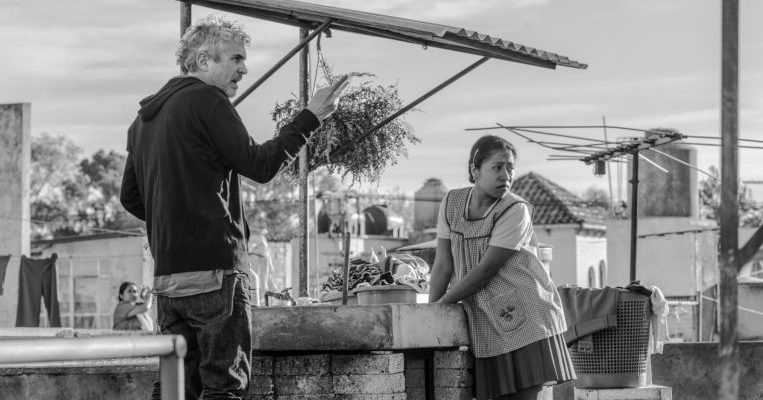 SINGAPORE – Writer-director Alfonso Cuaron was willing to do what he calls “some maniac stuff” to recreate the 1970s Mexico City for his film Roma, a drama based on his boyhood memories.

Not only did the crew find a house that was a replica of the one he used to live in, they tracked down the furniture that used to be in his old home.

“Seventy per cent of the original furniture was recovered,” he said, and they appear in the film.

Not only that, items that used to be in his family’s drawers were also stuffed into the prop drawers, even if they were never going to be opened on camera.

He was speaking at Filmgarde Bugis+ on Thursday night (Dec 20) after a screening of Roma, presented by Netflix and the Singapore Film Society, attended by an audience of 300 invited guests, many of whom were film-makers and film students. This is his only visit to the Asia-Pacific region for the movie’s release.

Film-maker Boo Junfeng (Sandcastle, 2010; Apprentice, 2016) was the night’s moderator and he asked Cuaron questions from around the world posted on social media.

Some might think his quest for authenticity might have been excessive, but the director gave examples of others who had famously gone further, such as one who had a cake baked for a period film using the actual 19th century recipe.

He said that being fanatically accurate helped him and his cast get into the right frame of mind as it “gives you a sense of the reality that you are diving into”.

Roma is now streaming on Netflix. It won the Golden Lion at the Venice Film Festival and has been nominated in the Best Director, Best Foreign Language and Best Screenplay categories at the Golden Globes.

The 57-year-old – whose credits include the science-fiction blockbuster Gravity (2013), for which he won the Oscar for Best Director – said that immersing the cast in his remembered world also involved shooting scenes in chronological order.

If something had gone wrong during the filming of a hazardous seaside scene, “then we would have a different ending,” he said, to laughter from the audience.

Asked why he chose to do such an intimate project after making a big-budget smash like Gravity, Cuaron said that “there is a point in your life where you want to come to terms with who you were, to understand who you are”.

“Gravity’s success manifested itself in more opportunities, bigger budgets. But in that moment, I realised that I could cash this and go back to my own country and do a film on my own terms, with the tools I had learnt to use making bigger films,” he said.

Boo asked Cuaron why he chose Netflix as a platform instead of releasing Roma in cinemas, so audiences could watch it on a big screen and with good sound.

Cuaron, whose other credits include the post-apocalyptic fantasy Children Of Men (2006) and the Oscar-nominated drama Y Tu Mama Tambien (2001), said by giving Roma as wide a release as possible on an online streaming platform, he hopes that it will build a loyal following. Should cinemas want to screen it in future, there will be an eager audience for it.

“The cinema experience is one part of the life of your film. But that life… is very short. You hope that as many people as possible see it, you hope that it will prevail in time. That is the only test… eventually people will visit it again on the big screen.”