The past 48 hours have not been kind to Prince William and Catherine, Duchess of Cambridge. A flurry of interest in those weeks-old rumors that William cheated on Kate during her most recent pregnancy has resulted in swift and severe public condemnation of William’s alleged actions and character. To be clear, there’s still no concrete evidence — but in case you want to keep up with this wave of media attention, we’ve gathered up all the details of how this rumor came to be. Read on for a thorough rundown.

Back in March, British tabloid The Sun published rumors of a “fall-out” between Kate and her close friend Rose Hanbury, the Marchioness of Cholmondeley. The story they paint has Kate telling William that they need to “phase out” Hanbury and her husband. No reasoning for the fall-out was given at the time — only the news that Kate wanted nothing to do with them, and that William was protesting any rash action, having enjoyed their “double dates.”

Shortly after The Sun ran its story, The Daily Mail ran a story of its own denying the rumors and claiming that both women involved had “considered legal action.” 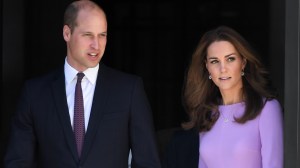 Royal Reporter Tweets: “Everyone Knows About The Affair”

The day after the Daily Mail piece, another member of the British media got involved on Twitter. In a now-deleted tweet, writer Giles Coren posted the following: “yes. it is an affair. i haven’t read the piece but i know about the affair. everyone knows about the affair, darling.” It’s believed that Coren was forced to take down his tweet, and the reports note that Coren is known for stirring up trouble. It also notes, however, that he is a “well-connected” media personality — so if it were true, it’s likely he would know.

In early April, American publication In Touch published a cover story on the rumored affair. Claiming access to an inside source, they reported intimate details of both the affair itself and how Kate found out about it. Shortly thereafter, William’s legal team served a warning to a British publication that published a similar story. The warning accused the outlet of peddling “false and highly damaging” allegations, and was widely believed to be a warning shot to other British publications that might consider following suit.

That was our last official update in terms of media coverage of the alleged affair — social media, on the other hand, has blown up with references to the rumors over the past 48 hours. With the court of public opinion coming down hard on William, we’re all waiting with bated breath to see if the royal family will address these rumors in coming days. Until then, we’ll have to content ourselves with wild speculation.

This is a developing story.