‘A Service Entrance’ at the Wall

For the third night in a row, Trevor Noah sat wordlessly onstage throughout “The Daily Show,” forced to remain silent because of a throat ailment. Desi Lydic, a “Daily Show” correspondent, sat beside him and delivered the evening’s punchlines. (Noah interjected here and there via cellphone, typing in his quips and having the device read them aloud.)

Lydic ridiculed President Trump on Thursday after a New York Times report revealed that he has employed an undocumented immigrant, Victorina Morales, for five years as his housekeeper at the Trump National Golf Club in Bedminster, N.J. Morales said she decided to reveal her secret after growing frustrated over mistreatment by a manager and Trump’s anti-immigrant rhetoric.

“Breaking news from President Trump’s New Jersey golf club, where we just found out that his housekeeper is an illegal immigrant. So, I guess Trump told us he’d build a wall, but he never said there’d be a service entrance.” — DESI LYDIC

“Trump now says that because the housekeeper doesn’t have legal papers, she’ll be terminated. Which, I got to tell you, I’m really surprised about. Usually, if you’re a woman in Trump’s bedroom the only document you need is an N.D.A.” — DESI LYDIC

James Corden is scratching his head over the news from a town in Colorado, where a longstanding ban on snowball fights was just overturned. Why, he wondered, was it illegal to throw snowballs in a place where it was legal to buy marijuana?

“In Colorado a 9-year-old boy has convinced his town to overturn an old law that bans snowball fights. Snowball fights were banned in that town? Think of the tension that has been built up in that town over the years. It’s going to be a North Pole version of the purge.” — JAMES CORDEN

“How weird is Colorado though? Marijuana was legalized before snowball fights. People were like, ‘Don’t you dare, that’s illegal. You take a toke on this joint and you respect the law!’” — JAMES CORDEN

“A 75-year-old New Jersey man has been arrested on suspicion of running a prostitution ring out of a nursing home. He’s the first pimp in history who actually needs to use the cane.” — SETH MEYERS

“Producers announced yesterday that Steve Harvey will be hosting a live New Year’s Eve special on Fox, where the ball will drop — but his eyebrows will not.” — SETH MEYERS

“The White House has confirmed that this Saturday, President Trump will travel to Philadelphia to attend the Army-versus-Navy college football game. Now you already know Trump 100 percent considers this ‘visiting the troops.’” — JAMES CORDEN

Ben Stein helps tell the story of the Chanucorn, the nine-horned unicorn and figment of the “Jimmy Kimmel Live” writer Gary Greenberg’s imagination.

Jason Momoa, who stars in “Aquaman,” is really into throwing tridents. So into it that he seems to speak in a made-up language of huffs and grunts while he throws them. 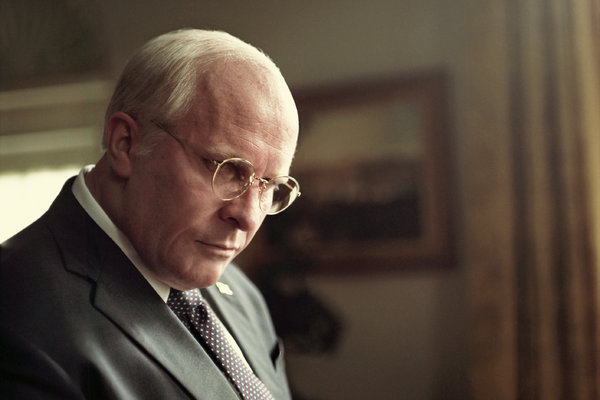 Nominations for the Golden Globes were announced on Thursday, and they’re already feeding speculation about the Oscars. “Vice,” a Dick Cheney biopic starring Christian Bale, is the most nominated film.