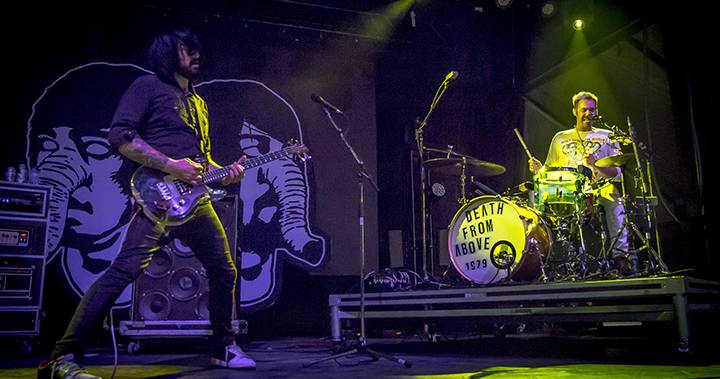 The seven-date ‘Heads Up! Is Now’ tour will see the Trainwreck 1979 rockers play their six-track debut EP Heads Up (2002), in its entirety.

This marks Death From Above’s first Canadian tour since 2017 — which coincided with the release of their last album, Outrage! Is Now.

“Death From Above play their debut EP and more,” they promised, adding that there will be a special guest.

As of this writing, the “special guest” has not yet been revealed.

In 2018, Death From Above reissued Heads Up on vinyl for the first time since its release. As well as the popular EP, the band is expected to play a number of cuts from their last record, along with some of their greatest hits.

Currently, it’s unclear if Death From Above is working on any new music. The band is known well for its sporadic music releases.

Following Heads Up, Grainger and Keeler released their second and latest EP Romantic Rights, in 2004. Their debut album, You’re a Woman, I’m a Machine (2004) followed only six months later.

Their second album, The Physical World (2014) was released nearly a decade later. Other than that, Death From Above put out one live album in 2016 — Live at Third Man Records.

Sebastien Grainger of Death From Above opens for Incubus/Deftones at Perfect Vodka Amphitheatre in West Palm Beach, Fla.

For early to tickets, Live Nation and Facebook both have presales beginning on March 28, at 10 a.m.

Additional details can be found on the official Death From Above website.