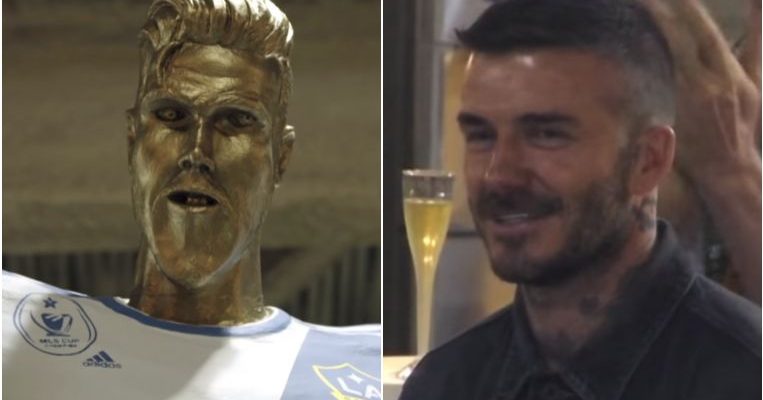 LOS ANGELES – David Beckham waved the “red card” when an ugly statue of the former Manchester United player was unveiled.

“I really don’t see how this can go out, it’s embarrassing,” he said in panic. “Look how long my arms are.”

He had turned up on Monday (March 11) at soccer club LA Galaxy – where he played from 2007 to 2012 – for a private viewing before the statue was put up outside its stadium, reported gossip portal TMZ.

Turned off by the sculpture that featured three teeth, a huge chin and a voluptuous bum, he added: “It doesn’t really look nothing like me though, look at my eyes. The only thing that looks good is the hair and that’s about it. Look at my bum.”

“It’s lucky my kids are not coming over because if my kids were to see this, they would just cry to be honest,” Beckham, 43, added.

The kick to his image was actually a prank pulled by TV host James Corden who had switched the real thing with a far less stylish one.

But it was not game over for Beckham – the statue broke into pieces after it fell from a forklift carrying it to its permanent home.

“You’ve probably done me a favour there,” he said.

He realised he was no match for Corden when the latter appeared on the scene, with the former England captain gamely putting on a rueful smile and hugging the latter.