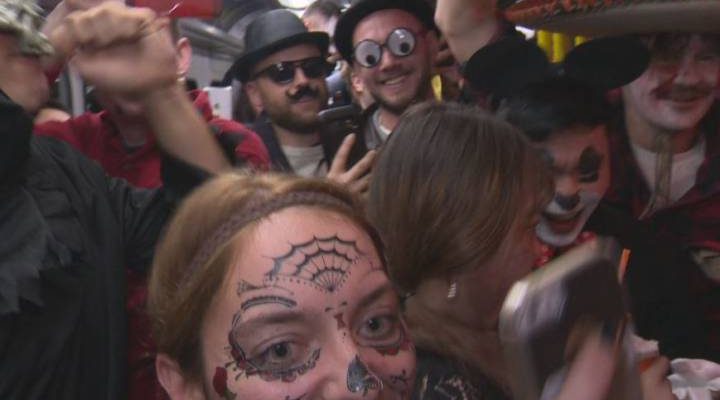 For the 12th year in a row, costumed revelers descended on the SkyTrain to throw a pop-up Halloween party, complete with DJs.

The event, organized by the Vancouver Public Space Network, started at Waterfront Station at 8 p.m. on Friday night, then rode the rails on the Canada Line to Richmond Brighouse Station and back again.

“Every year this time we do a SkyTrain party to try and transform the public transit system into an amazing awesome party scene with good friends, good costumes, good times,” said organizer Andrew Pask, decked out as Beetlejuice.

Partiers of all ages came dressed in costumes from Freddy Kruger to ninja turtles to Rey from Star Wars, but everyone said they were there for the same reason:

“Have fun, some music, party.”

Organizers required everyone attending to pay their fare for the train, refrain from smoking and clean up their trash on the way out.

The event drew curious stares from regular transit users, many of whom pulled out their phones to snap photos or shoot video of the creepy commute.

“This is a pretty interesting welcome to Canada,” said one rider, who had just arrived in town from Seattle.

“We don’t have this on our light rail, that’s for sure.”