Call it KAWSMANIA. The former graffiti tagger Brian Donnelly, who in 2021 will be the subject of a survey show at the Brooklyn Museum, was definitely the artist of the moment at this week’s marquee auctions held by Sotheby’s, Christie’s and Phillips.

Though Jeff Koons might have set an auction record on Wednesday night for a work by a living artist, that bar was reached courtesy of Christie’s recent increase in buyer’s fees, introduced on Feb. 1. Mr. Koons’s “Rabbit” and David Hockney’s “Portrait of an Artist (Pool with Two Figures),” auctioned last November, both sold for hammer prices of $80 million, but $762,500 of new fees at Christie’s inched Koons to that record level of $91.1 million.

The transformation in the market for paintings and sculptures of the cross-eyed cartoon characters developed by KAWS, as Mr. Donnelly is better known internationally, was far more obvious. Demand for his work has reached a new level since the extraordinary $14.8 million bid last month in Hong Kong for his 2005 painting “The Kaws Album.” 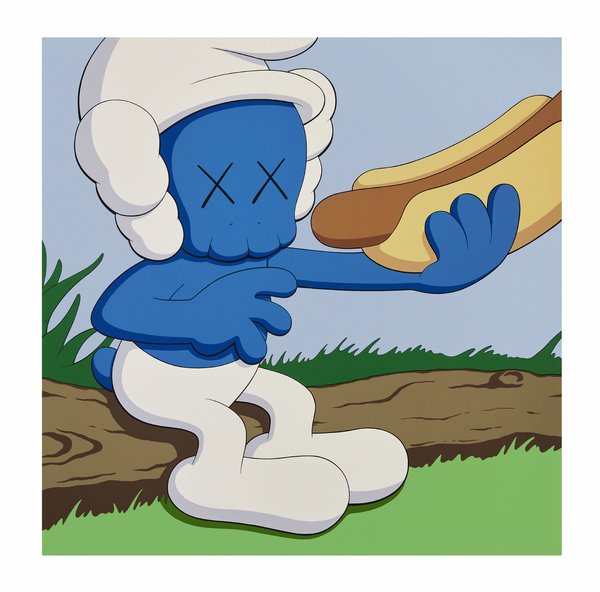 Time and again this week, estimates were left far behind by eager multiple bidders when a KAWS came under the hammer. On Wednesday night at Christie’s, the artist and designer’s 2009 painting “Kurfs (Tangle),” inspired by the Belgian comic characters, the Smurfs, sold for $2.7 million, more than four times the low estimate.

Demand was even greater this afternoon at Phillips for “The Walk Home,” a 2012 painting featuring the cartoon character SpongeBob SquarePants, but with the artist’s trademark crossed-out eyes. At least five telephone bidders battled for this lot — at one point the price jumped $1 million with a single bid — before it finally sold for $6 million, the highest price of the week for the artist. The result was 10 times the low estimate of $600,000.

“The early attention to his work came from younger, emerging buyers from Asia,” said Scott Nussbaum, head of 20th Century and Contemporary Art in New York at Phillips, explaining how the market for KAWS, who currently has 1.9 million followers on Instagram, has expanded. “But now we’re seeing older, established collectors from the United States and Europe walking into our galleries and asking to see the KAWS as well as the de Kooning.”

Jean-Michel Basquiat famously made a similar transition from street art to fine art. His drawings and paintings are now featured in almost every high-end contemporary action. For many, Phillips offered the pick of this season’s Basquiat entries with the 1983 “Self-Portrait,” painted on two found wooden doors.

Offered from the estate of Matt Dike, a Los Angeles hip-hop producer who was a friend of the artist, this sold for $9.5 million with fees to the New York-based art dealer Jude Hess.

Later in the evening, Sotheby’s also jumped on the KAWS bandwagon when it offered the 2008 canvas, “Kurf (Hot Dog),” estimated at $1.5 million to $2.5 million. Competition was a little more measured here; the telephone bidding stopping at $2.7 million.

Still, it seemed to represent a speculative side of the market hungry for the next big thing. “The market is wacky. History means nothing. It’s more about momentum and trading,” said Douglas Walla, a private dealer based in New York, commenting on the current vogue for KAWS. “The whole thing is lubricated by social media. Artists have been able to become successful without having to engage with the critical arena.”

Mark Rothko’s 1960 “Untitled,” an archetypical abstract comprising rectangular fields in maroon, red, white, had been deaccessioned by the San Francisco Museum of Modern Art to fund new acquisitions. Though the sell-off had raised some eyebrows, the prestige of the SFMoMA provenance won over bidders and it sold for $50.1 million to a telephone buyer, against an estimate of $35 million.

Francis Bacon’s little-exhibited 1952 canvas, “Study for a Head,” was a rare opportunity to buy a painting from the artist’s famous “Screaming Pope” series. Never offered at auction before, the work had been owned since 1975 by the Seattle philanthropists Richard E. Lang and Jane Lang.

It sold for $50.4 million, more than double the low estimate, to the New York-based art adviser, Chris Eykyn.

“The Bacon market has had a lull, but this is one of the most recognizable of the early Popes. It’s a masterpiece,” said Ivor Braka, a London dealer and collector who specializes in the British painter’s works.

The estimate-smashing prices for KAWS, as well as that $91.1 million record for Koons, plus a record $34.7 million days sale at Phillips on Wednesday (again topped by KAWS) seemed to create a sense that the auction market for contemporary art is buoyant, at least in New York. As ever, as Mr. Braka pointed out, when some artists are on the rise, interest in others cools. Nonetheless, the spring sales of postwar and contemporary art raised $981 million, a 6.6 percent increase on the equivalent sales last May.