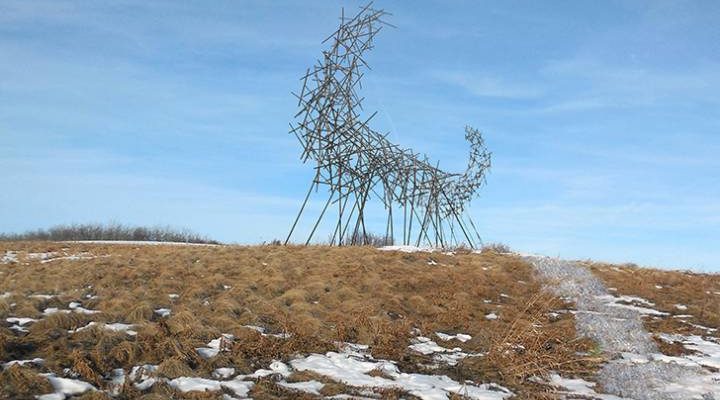 For the welder climbing a 14-metre-tall stainless steel web of pipes, the temporary title of Calgary’s newest public art piece — “Ascend” — is fitting.

Last week, a team of local tradespeople hauled the deconstructed pieces of the sculpture up a grassy knoll behind the Rocky Ridge YMCA.

Many area residents who’ve been watching the construction have suggested it looks a little like the hill has horns. And that’s not entirely accidental.

If Calgary vote is any indication, public art means never having to say you’re sorry

The Seattle-based artists Laura Haddad and Tom Drugan said they were inspired by local wildlife, mythical creatures and winter vegetation.

“The artwork is kind of inspired by bison horns and, you know, 13-legged creatures you might find up here.” Haddad said.

The installation comes with a $911,000 price tag. It may be one of the last art installations built as part of a public art policy that’s been put on hold for over a year now. It dedicates one per cent of infrastructure costs to art.

“That was my motion to stop everything,” Councillor Sean Chu said. “After that, we learned that legally… the project is already in the pipes.

“You cannot stop it,” Chu said of the latest public artwork.

Ascend’s contract isn’t affected by the moratorium because the contract began in 2013.

It should be complete by the end of November. At that time, the community will be tasked with giving the sculptures a permanent name.