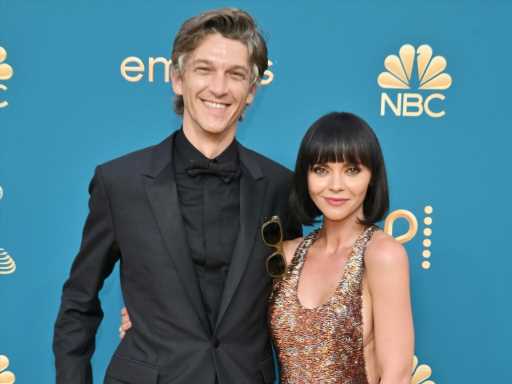 Christina Ricci will always be an Addams family member in our hearts, even if she’s not playing little Wednesday Addams anymore. But it’s clear the Yellowjackets star always has a fondness for the darker things in life, especially when it comes to her wardrobe. As a holiday treat, Ricci and her husband Mark Hampton decided to bring a bit of that darkness to a new photoshoot. And we’re seriously getting Morticia and Gomez Addams vibes from this.

On Oct 5, Ricci uploaded the photo with the caption, “This is what I’ll be wearing to Xmas dinner 🎄🎄🎄 Mom and Dad ❤️‍🔥 @markhamptonhair for the new #MakeMerry campaign for @nordstrom 🎅.” She also tagged accounts like: “@mandelkorn @allanface @brycescarlett @rubyvo.”

You can see the show-stopping photo HERE.

In the photo, we see Ricci wowing in a bodycon black dress that perfectly hugs her curves, exactly like Moritica’s iconic black gown. She has her hair in a tight bun, with statement earrings delicately dangling over her shoulders. She has her arm wrapped around Hampton, who’s wearing a black velvet jacket atop a black button-down and dark jeans. There are a bunch of little holiday trinkets around the photo shoot.

But okay, from the dark clothes to the smolders to even the posing: they are channeling Morticia and Gomez exactly. And we’re obsessed, to be honest.

In case you don’t know, one of Ricci’s most iconic roles was when she played Wednesday Addams in the 1993 film The Addams Family. Wednesday is a teenager obsessed with death and darkness, like her lovebird macabre parents Morticia Addams and Gomez Addams. Originally based on the sitcom in the 1960s with the same name, the Addams family have become cultural icons. 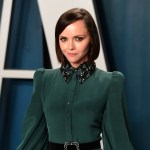 There have been a bunch of remakes (including the upcoming Netflix one starring Jenna Ortego and Catherine Zeta-Jones!) And here’s the thing: Ricci is also appearing in that latest remake. She told Collider that she’s so excited to be back in that universe, saying, “To be a part to be asked to be a part of the new version of this thing that is a huge part of my identity and my history in my life. I mean, I know they didn’t do it out of the goodness of their hearts, but I was really touched by it, and I felt like it was very nice. And it’s such a fun world, and my character is outrageous and fun and different than anything I’ve done, and it was really great.”

Before you go, click here to see the best movie & TV transformations into well-known women.