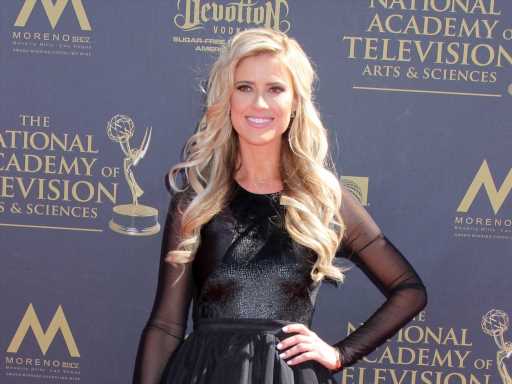 Tarek and Heather Rae El Moussa’s pregnancy news was an exciting one for fans who have followed their journey from dating to marriage over the years. Now that the couple is expanding their family, many followers are curious as to how Tarek’s ex-wife Christina Hall feels about the situation, especially after their soccer field blowout in May.

It sounds like Hall isn’t looking for another fight, and she’s reportedly thrilled for the couple, according to an Entertainment Tonight source. The insider shared that “Christina is happy for Tarek and Heather,” but there is one condition. “As long as Tarek and her are peacefully co-parenting, she is content,” they added. The former couple share 11-year-old daughter Taylor and 6-year-old son Brayden, but it hasn’t been a peaceful journey after divorcing in 2018.

Last summer, Tarek reportedly went on a “verbal tirade” on the set of their HGTV show, Flip or Flop, that was aimed at Hall where he compared her to his current wife, calling Heather “hotter” and “richer.” The incident continued with the TV personality calling Hall a “washed-up loser” and claiming that “the world knows you’re crazy!” It likely caused the demise of their show, which they wrapped in March..

If that wasn’t enough, Tarek and Heather got into a heated confrontation with Christina and her new husband Joshua Hall at a children’s soccer game. The worst part about the event is that the paparazzi captured every moment on film — and it probably was embarrassing for all of the parties involved because their behavior was on display for the entire world to see. The foursome showed a united front after the verbal altercation, and that was, hopefully, a turning point in the co-parenting relationship. With a new baby about to be added to the mix, a little bit of peace and happiness goes a long way.

Before you go, click here to see celebrity exes who never buried the hatchet.