Christie Brinkley is supermodel royalty. The beauty icon’s decades-spanning career has seen its fair share of impressive accomplishments, and it shows no signs of slowing down. She can call herself an actor, beauty icon, music video leading lady, author, entrepreneur and a Sports Illustrated Swimsuit issue cover star (a coveted badge of honor she earned for the fourth time at age 63, mind you).

Brinkley’s latest milestone is landing the title of style influencer of the year at the 2018 Footwear News Achievement Awards. What makes the award particularly special is that she’s being recognized alongside two very important people in her life — daughters Alexa Ray Joel and Sailor Brinkley-Cook. They were the first multigenerational winners and accepted on Tuesday at the annual ceremony, which honors the best of the best in the footwear industry.

SheKnows got the opportunity to speak with Brinkley ahead of the event and find out what the achievement means to her and the fashion and beauty worlds. She also offered up some valuable words of wisdom about maintaining self-confidence, abandoning self-doubt and reshaping people’s perceptions of aging.

“I was actually really touched because I’ve been in the business for 40 years, and this is my first industry honor, so it’s kind of nice to be appreciated,” Brinkley said of her reaction to finding out she would be 2018 FN Achievement Awards style influencer award recipient. “I was really quite delighted that [Footwear News] asked, and [by] the fact that it’s multigenerational with my beautiful daughters, who are such unique individuals. I think the total statement of the three of us together speaks a lot about how fashion is embracing individuality, and I think that is such a beautiful thing that is going on right now in our industry. Hopefully, that’s not a passing trend and it’s here to stay.”

Thank You @footwearnews and @michael_atmore for this incredible honor for my family! Thank you gorgeous @ninaagdal and @jackbrinkleycook for giving @alexarayjoel @sailorbrinkleycook and me our charming introduction. To be awarded FN’s prestigious first ever multi generational #styleinfluenceroftheyearaward means something different to each one of us. For me it’s an opportunity to give the numbers that define my generation the boot, (in the shape of a @fendi thigh high no less!) because let’s face it we have allowed those numbers to boss us around for too long “no long hair past 30! No short skirts after 40 ! No bikinis after 50! What’s “appropriate” at 60? Well as a woman about to turn 50 again for the 15th time ( Hey! I was born on Groundhogs Day!) but you know, 65 ain’t what it used to be! Thanks to science we know what to eat and how to exercise and we have a whole array of choices for dealing with wrinkles and can basically decide which ones are good enough to keep! And we are plugged in connected and ready to thrive! We are not invisible! We are vibrant and relevant and taking on challenges and we want to be represented in fashion magazines and beauty ads. So to me after over 40 years in an industry that used to tell us we were washed up at 30 this is an amazing honor to be recognized. Fashion is about change and the biggest change I’ve seen is the expansion of the perception of beauty..beauty is inclusive and found in every race color size creed and age. To stand next to my kids making their mark in their own authentic individual way and accept this on behalf of my Generation was LIT! My wig has flown! #family #love #gratitude #fnaa32

Brinkley points out that the award is a sign of the changing times and that she’s seen a noticeable shift in the modeling industry since she began working.

“I think that the biggest thing in the modeling industry is this going back to individuality and embracing and expanding our idea of beauty to be so much more inclusive. And it’s not just words, it’s actually people’s eyes are being retrained in a way,” she said.

The supermodel also expressed that she’s seen notions of beauty widening and becoming more “inclusive on every level.”

“I think that when I started out so many years ago, they had everything down to a kind of science as to what would sell and what wouldn’t sell, and I think that’s all been tossed out the window now. And it’s a whole new world of beauty that’s just so much more beautiful,” Brinkley noted. 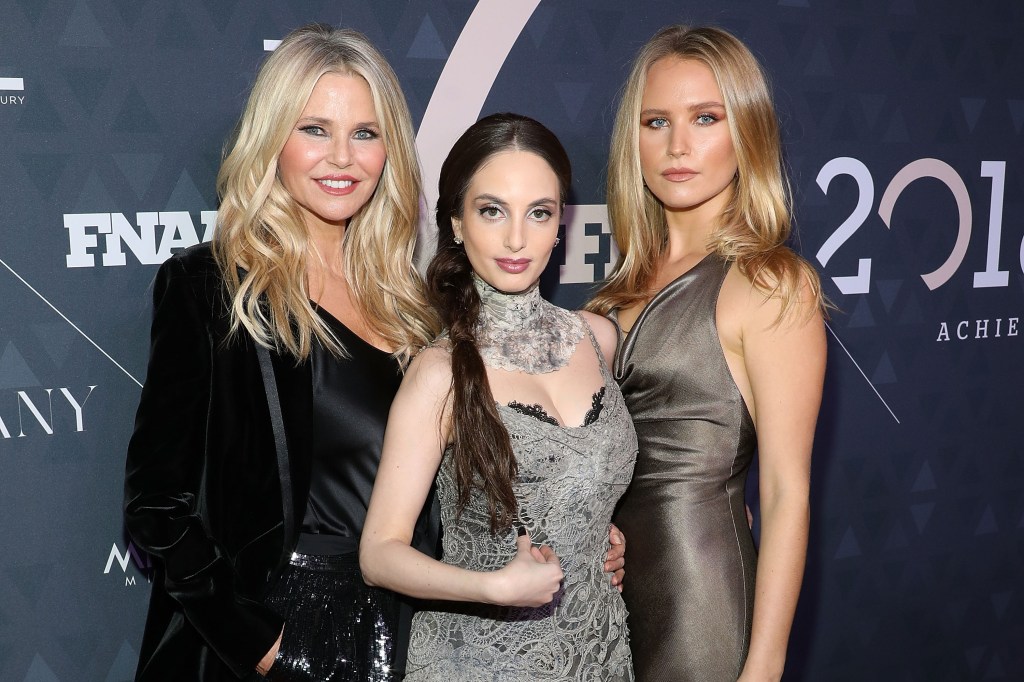 What are the longtime celebrity’s thoughts about women having an expiration date in Hollywood? According to her, “Ageism is the last frontier.” In other words: It’s time to get over it.

And while things may be moving in the right direction, there’s still a ways to go.

Brinkley added, “I hope that it gets to a point, like, where a beauty company, for instance, doesn’t just have one woman of a certain age representing the brand — the token older woman. It would be wonderful to see a company have several women because older women don’t just come in one color, one size, or one ethnicity. It would be great to see a real broadening of this embrace of women of a certain age.”

“I think that’s why, when Footwear News says this is their first multigenerational award, it’s something you could always cruise right over, but the fact is they’re recognizing that I’m going to be a number that I don’t recognize as associated with me on my next birthday. I think that it’s great that Footwear News is recognizing that. I’m trying to reshape the way we think of those numbers instead of allowing those numbers to shape us and the way we think,” she went on.

The modeling and the entertainment industries are evolving in Brinkley’s eyes, but women and young adults still face everyday pressures that have become amplified by social media and the internet in recent years.

Brinkley’s spot-on advice for keeping up confidence these days is simple: “I think self-esteem and confidence comes from really focusing on other things than yourself. I think when you get too introspective or too self-absorbed, then you might start doubting yourself. But if your primary goal in the day is to make someone else happy, it’s a whole different ball game. You just move through your day in hopes of brightening somebody else’s day, and because your intentions are good, you don’t have to worry about confidence and self-esteem and all that. Just be you being good trying to brighten someone’s day.”

Go behind the scenes with supermodel @christiebrinkley and daughters @sailorbrinkleycook and @alexarayjoel on set at their photo shoot for this week’s issue. The trio will be honored at tomorrow’s FN Achievement Awards as our Style Influencers of the Year. ?: @m.jorquera.studio; edits by @butter.la #FNAA32

She also credits letting go of judgment and treating others with kindness as keys to a more blissful existence. If she could, she would tell her younger self to just relax.

Brinkley advised, “Relax, and there’s no such thing as them or it, the ones who you think are judging you. It’s you. You just do what makes you happy, and hopefully, that also includes being kind and respectful to people around you, and you count your blessings, and you’re grateful for everything, and then you can just live a happy life. Period. End of story.”