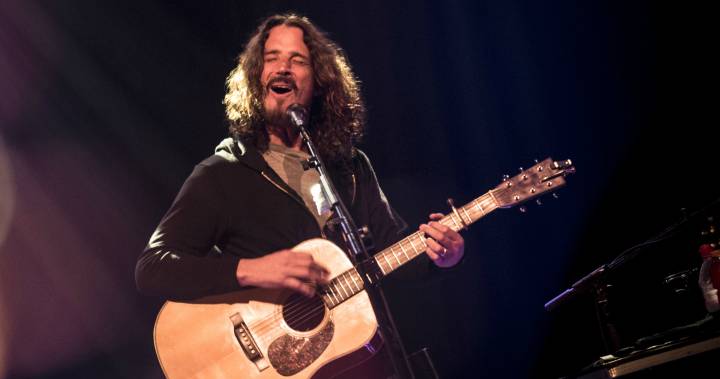 The late Chris Cornell was honoured at Sunday’s 61st Annual Grammy Awards; the rocker won his first-ever Grammy as a solo artist and third overall.

Of the 84 award categories, more than 30 of them were revealed before the Grammys televised four-hour event — Cornell was revealed as one of those winners.

The former Soundgarden frontman was awarded Best Rock Performance thanks to the popular posthumous single, When Bad Does Good.

He beat out the likes of Arctic Monkeys, Halestorm, The Fever 333 and up-and-comers Greta Van Fleet.

Cornell’s children Christopher and Toni took the stage to accept the award on behalf of their father. They made a heartfelt speech.

“I never thought we’d be standing here without my dad,” said Christopher. “I’m sure he would be proud and honoured.”

“He was known for many things,” he continued. “He was a rock icon, the godfather of grunge and the creator of a movement.”

“While he touched the hearts of millions, most importantly he is known for to us is for being the greatest father in our ear.”

Toni jumped in and concluded the speech by saying “his voice was his vision and his music was his peace. This is for you daddy, and we love you so much.”

When Bad Does Good was released by the Cornell estate back in November. It was Cornell’s final original material recorded before he took his own life on May 18, 2017.

The singer last won a Grammy more than 25 years ago with Soundgarden in 1994.

A second award was earned with the first single from their critically-acclaimed 1994 record Superunknown. Soundgarden won the award for Best Metal Performance with Spoonman.

Chris Cornell performs at Prophets of Rage and Friends’ Anti Inaugural Ball at the Taragram Ballroom on Jan. 20, 2017 in Los Angeles, Calif.

On Jan. 16, the “I Am the Highway: A Tribute to Chris Cornell” concert took place in California. Some 17,505 fans came from far and wide to celebrate his legacy.

While the concert was launched to honour the legacy and music of Cornell, it also served as a fundraiser for the Epidermolysis Bullosa Medical Research Foundation.

All proceeds were split between the research charity and the Chris and Vicky Cornell Foundation — which was founded by the singer and his wife, Vicky Cornell. It was launched as a foundation that protects and provides for vulnerable and neglected children around the globe.

Chris Cornell of Soundgarden performs on stage during the 2014 Lollapalooza Brazil at Autodromo de Interlagos on April 6, 2014 in Sao Paulo, Brazil.

As of this writing, Soundgarden have not confirmed a reunion, but the three surviving members — Kim Thayil, Matt Cameron and Ben Shepherd — have expressed interest in getting back into the music scene — whether that would be as Soundgarden is unclear.

“We would certainly love to try to continue to do something together,” bassist Shepherd said in a recent interview following the unveiling of a commemorative Cornell statue in Seattle.

The “I Am the Highway: A Tribute to Chris Cornell” event was the first step for the trio.

You can find the full list of Grammy winners and nominees in the main categories here.