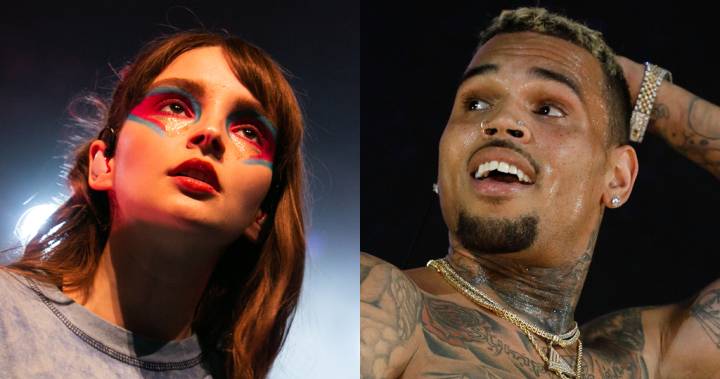 WARNING: This article contains sexual and explicit language and may be triggering for some readers. Please read at your own discretion.

After Chvrches questioned Marshmello‘s decision to collaborate with Chris Brown and Tyga on last week’s single, Light it Up, Brown, 29, lashed out against the Scottish indie pop band.

The Leave a Trace hitmakers — who collaborated with Marshmello, 26, on Here with Me in March — posted a message to Instagram expressing their disappointment with Marshmello after partnering up with the hip-hop stars.

“We are really upset, confused and disappointed by Marshmello’s choice to work with Tyga and Chris Brown,” wrote the group last Thursday.

Both musicians have been accused of sexual misconduct on numerous occasions.

“We like and respect Mello as a person, but working with people who are predators and abusers enables, excuses and ultimately tacitly endorses that behaviour. That is not something we can or will stand behind,” the band continued.

Shortly after, Brown leaped to defend himself by replying to the post with a lengthy comment comparing the band’s success to his own.

“Bunch of losers,” he began. “These are the type of people I wish walked in front of a speeding bus full of mental patients.”

Chris Brown performs onstage at Something in the Water, Day 3 on April 28, 2019 in Virginia Beach City.

“Keep groveling over you own insecurities and hatred,” he added. “Im black and proud. And I know its [sic] hurts that u guys are struggling wit life or peace so u are forced to see my success.

“Where [sic] all God’s children,” he wrote. “Everyone makes mistakes. No one’s perfect. Let’s keep the energy positive.”

The energy was not kept positive, however — at least for Chrvches’ leading lady, Lauren Mayberry.

Mayberry, 31, was targeted online by a large number of Brown’s fans. She later posted a number of screenshots of verbally abusive messages she had received through Instagram.

“Learn to keep Chris Brown’s name out of your gutter trailer trash a** mouth, stupid racist white b***h,” read a portion of one of the hateful messages.

“The last ‘b***h’ really helped get the point across,” Mayberry wrote sarcastically in her screenshot.

“Angry men on the internet can call me all the names they want,” she continued. “I still think domestic abuse is wrong. Peace out, internet. Tomorrow is a brand-new day.”

Lauren Mayberry of Chvrches performs during the 2019 Coachella Valley Music and Arts Festival on April 21, 2019 in Indio, Calif.

As a result of his collaboration with Brown and Tyga, Marshmello is under fire from thousands of his dedicated fans over social media.

Many of those individuals have also defended Chvrches, ultimately questioning why the DJ would choose to work with alleged abusers.

As of this writing, Marshmello has responded to neither Chvrches’ comments nor the mass influx of online criticism.

In the last decade, both Brown and Tyga have been faced with a series of sexual abuse allegations and subsequent legal issues.

Brown has been in repeated legal trouble since pleading guilty to the felony assault in 2009 of his then-girlfriend Rihanna. He completed his probation in that case in 2015 but has continued to have run-ins with police.

Most recently, Brown was accused of raping a woman in January. He was detained with two other associates in Paris. He later revealed that he was planning to sue the 29-year-old accuser for slander.

If you or someone you know is experiencing abuse or is involved in an abusive situation, please visit the Canadian Resource Centre for Victims of Crime for help. You can also reach the centre toll-free at 1-877-232-2610.