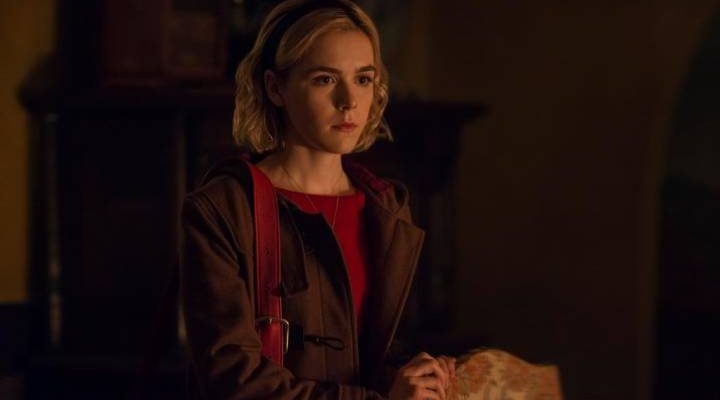 A set decoration in the Netflix series Chilling Adventures of Sabrina has caused criticism from a specific group.

The series sees Sabrina Spellman attend the Academy of Unseen Arts. At the school — and shown many times throughout the episodes — is a statue of goat deity Baphomet.

The Satanic Temple’s co-founder, Lucien Graves, took to Twitter on Oct. 28 to reveal that the temple is taking legal action against the series “for appropriating our copyrighted monument design to promote their asinine Satanic Panic fiction.”

In an interview with SFGate, Greaves said, “It’s deeply problematic to us. [But] even if that wasn’t the case we’d be obligated to make a copyright claim because that’s how copyright works.”

“I feel that the use of our particular image that is recognized as our own central icon [being] displayed fictionally as central to some cannibalistic cult has real-world damaging effects for us,” he said.

“I want them to take it out,” he added. “It looks like it’s a CGI facsimile to begin with. I don’t know how much work that takes, but I simply refuse to have our monument used in this way in perpetuity. I don’t want our monument to be associated with this.”

The temple’s legal adviser claims to have sent a demand letter to Netflix and Warner Bros. about the statue.

On Wednesday, the Satanic Temple’s legal adviser, Stuart de Haan, shared a portion of the demand letter with The Hollywood Reporter.

“By way of background, my client is struggling to overcome centuries of stigma surrounding their religious symbolism,” writes de Haan.” My client has expended considerable efforts in the design and creation of their particular expression of Baphomet, the goat-headed deity represented by this monument. This statue is an original work and, until now, has been associated exclusively with The Satanic Temple all around the world. This has deep religious significance to my client’s organization.”

According to the Hollywood Reporter, the Satanic Temple wants any advertisements including the show’s monument taken down, for the likeness’s use to be discontinued, and for Netflix and Warner Bros. to provide an explanation of how their show’s monument was created.

Netflix has not addressed the demand letter from the Satanic Temple’s legal adviser as of this writing.