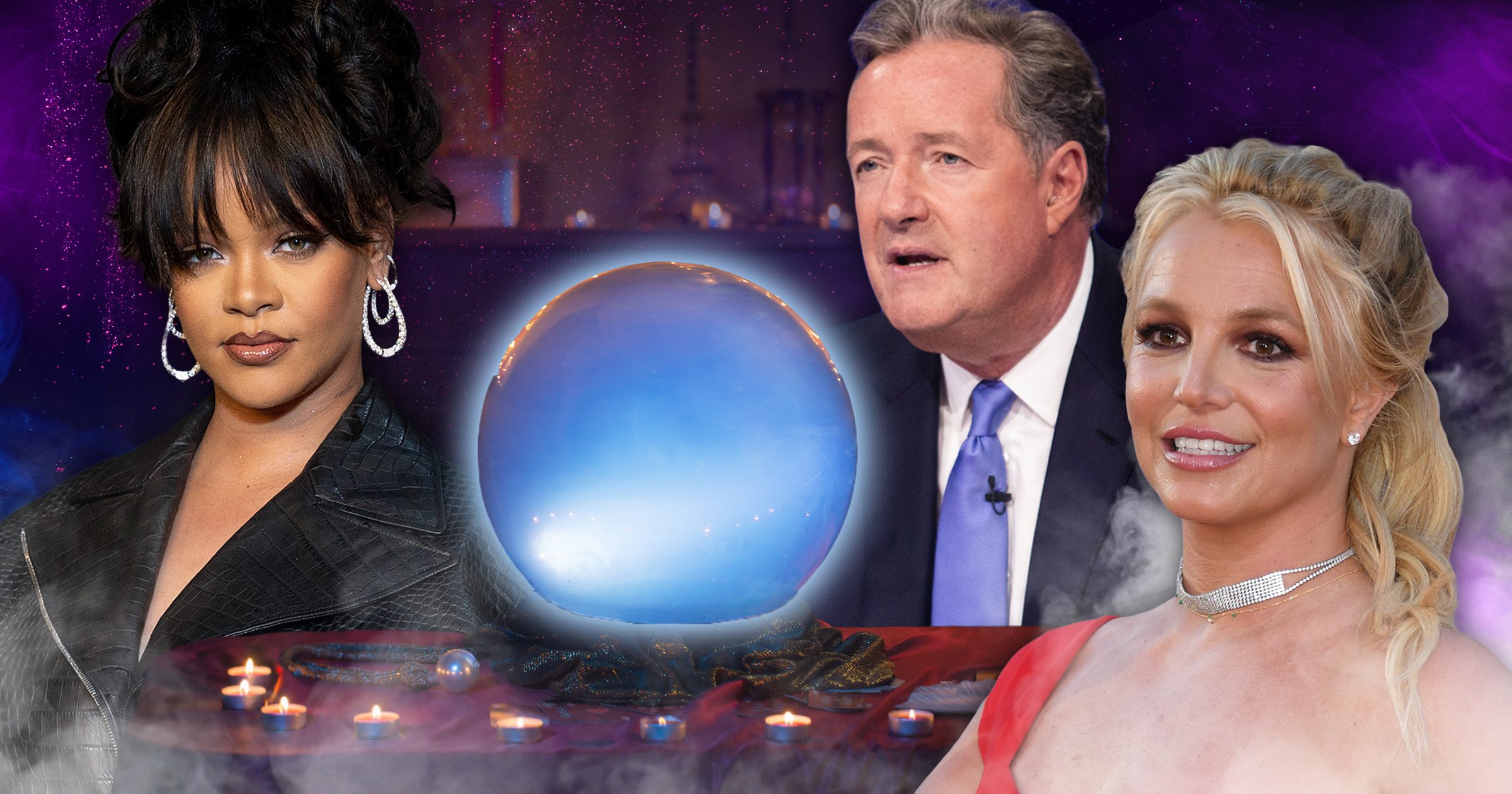 At the start of this year, we had a psychic predict what 2022 had in store for our stars – so it’s only fair we see what came true, right?

Nicolas Aujula had some strong feelings on what might happen in the lives of Piers Morgan, Dolly Parton, Kim Kardashian, and more, and shared some rather interesting predictions for their love lives and careers.

So, let’s revisit those projections and see if the letter L really was significant for Adele, and whether Kylie Jenner had a nasty fall…

The prediction: Aujula didn’t have Holly Willoughby down to leave This Morning anytime soon, but he did note that there was going to be a ‘great shift’, which could result in Holly hosting her own show or changing her TV career.

‘I do feel she’ll be giving women a platform, women’s issues are quite important to her, and I think, as she gets older, she’ll really take a stand for some of the issues that women go through and she’ll talk about what she’s been through as a woman,’ he said.

What actually happened: Alas, Holly didn’t exactly have the support of the nation throughout the whole year, as she and co-star Phillip Schofield were embroiled in a scandal following Queen Elizabeth II’s death.

The daytime duo visited Westminster Hall like thousands of others to see the monarch’s coffin lying in state, but received immense backlash when they appeared to jump the line.

Later, however, ITV bosses confirmed that the pair did not skip the queue and were there in a ‘professional capacity’, but that didn’t stop the public from creating a petition to get them kicked off their show. Ouch.

The prediction: Aujula didn’t think Kim Kardashian had a ‘serious love’ in her life for 2022. He also predicted a ‘spiritual’ year for her, and a rather busy schedule in the second half.

‘In terms of her love life, I don’t feel like there’s anything major. Everything is quite light-hearted. She’s going to be exploring the field,’ he added.

What actually happened: Well, Kim certainly explored the field, as she enjoyed a whirlwind romance with SNL comedian Pete Davidson, following her split from Kanye West.

They actually started dating in October 2021, but became increasingly public with their romance throughout the year, walking the Met Gala carpet together and Pete even making an appearance in her family’s reality show.

It wasn’t made to last, though, as Kim and Pete called time on their relationship split after nine months in August.

As for Aujula’s note that Kim is ‘highly intelligent,’ that’s certainly something she proved this year with her continued to pursue law.

The prediction: It was predicted that Khloe Kardashian would ‘keep going for some time’ with Tristan Thompson, despite the controversies that have surrounded their relationship.

What actually happened: Well, they certainly kept going in one way as they’re bound for life, since Khloe and Tristan welcomed a second child together via a surrogate in August.

However, their actual relationship hasn’t strengthened, thanks to cheating allegations.

One person who has remained on good terms with Tristan though, surprisingly, is Kim, who shocked fans by joining Tristan for a Thanksgiving meal with inmates.

The prediction: Aujula didn’t have Tom Holland and Zendaya down for a ‘long-term’ relationship, or for marriage. He said they have ‘great chemistry,’ but admitted he thinks things will fizzle out after travelling together.

What actually happened: Well, proving Aujula wrong, Tom and Zendaya have gone from strength to strength.

There were even rumours towards the end of 2022 that they were looking to ‘settle down’ and get married. But, these were quickly shut down.

They did travel a lot together, though, enjoying romantic trips to the likes of Paris, and continued to be the adorable, unproblematic couple we know and love.

The prediction: Aujula couldn’t predict a date for a possible Rihanna album, but he did say that ‘nudity and challenges around the female form, mistresses, having affairs, and freedom’ would be themes in her new music. He described her as a woman who’s ‘risen from the ashes.’

What actually happened: Well, it would’ve been hard for anyone to predict the year Rihanna gave us, right?

While we didn’t get R9, we did finally get a new song from her as she released Lift Me Up from the Black Panther 2 soundtrack. What’s more, Riri was confirmed as the headline for the 2023 Super Bowl show, meaning new tunes could be right around the corner.

As for fashion, Rihanna and boyfriend A$AP Rocky stunned everyone when they announced they were expecting their first child this year, who was later revealed as a son. During her pregnancy, Rihanna delivered some of the most iconic, bold lewks, flipping maternity fashion on its head, and there were definitely metallic elements to some.

The prediction: Aujula predicted a possible Bafta or MBE for the ‘biggest gob in the industry’ this year. He also said Piers should ‘watch out’ for a female pop star ‘putting him in his place’, and reckoned his future looked brighter away from the UK.

What actually happened: While Piers wasn’t shut down by Dolly Parton as predicted, he did land his own show on TalkTV, giving him another platform to spout opinions following his Good Morning Britain exit.

Unsurprisingly, Piers also continued to vent about Meghan Markle and Prince Harry, with the Duke and Duchess addressing harassment from the media in their December Netflix series.

The prediction: Aujula predicted some ‘female duets’ from Rylan Clark, suspecting they could ‘bring him great success’ in the pop world. He also thought Rylan would ‘lock horns’ on social media with a woman from daytime TV.

What actually happened: Well, Rylan didn’t make a music comeback and very much stayed in his presenting lane. He did, however, launched a segment on his BBC Radio 2 show named Ka-Ry-oke, which included him singing with stars such as Melanie C, Craig David, Sinitta, and more.

He also didn’t get involved in any major Twitter spats, bar the odd sassy response to a troll, but Rylan did do a lot of talking this year, becoming very bravely vocal about his mental health following his divorce.

The prediction: ‘I want to say don’t wear heels, you may injure your feet or ankle, or fall,’ Aujula gave us.

What actually happened: Well, we didn’t report on any heel disasters from Kylie this year. In fact, she welcomed a second baby at the start of 2022, so there probably weren’t many pairs of heels in sight for a while.

The prediction: Aujula predicted Gemma Collins would appear on more dating shows, bringing a ‘breath of fresh air’ to the reality TV scene. He also hinted at a possible collaboration with former Towie stars.

‘I feel she wants to break America, but I don’t see it’s easy,’ he added.

What actually happened: The GC has continued to be iconic this year and, with regards to her career going Stateside, there’s a possibility that might come into fruition.

The prediction: Aujula said Lady Gaga had ‘two more movies’ in store, and saw her ‘in the guise of Cleopatra or an Egyptian queen’, either in film or in a music video.

What actually happened: Well, we didn’t get any Egyptian Gaga this year, but we did get a new music video, as she sang Hold My Hand from the Top Gun: Maverick soundtrack.

She’s made no signs of bagging another movie role, but 2023 could be her year.

The prediction: It was believed that 2022 would see Britney Spears would continue to have ‘greater self control’ over her life this year, following the end of her 13-year conservatorship in 2021. Aujula also saw children ‘playing a bigger role’ in her life.

What actually happened: It turns out, Britney was planning on expanding her family with new husband Sam Asghari, whom she married this year.

However, very sadly, she suffered a miscarriage, which she shared with fans in May.

The couple said at the time: ‘It is with our deepest sadness we have to announce that we have lost our miracle baby early in the pregnancy’, adding that they were ‘devastated.’

The prediction: ‘She’s always going to be a star no matter what, and the letter L is very significant. She may even go into acting. I see her in a convertible Cadillac, an old car. Athens is important, Greece, for some reason,’ Aujula said.

What actually happened: Well, the letter L was certainly significant in one way for Adele, as she finally began her Las Vegas residency, Weekends With Adele, after being forced to cancel at the last minute due to the pandemic.

She’s received rave reviews since hitting the stage in November, and has added even more shows, with tickets selling on for wild prices.

So, that’s it for this year’s predictions… what will 2023 bring?