The end of the year means the end of licensing contracts for the streaming services, so this month’s Netflix offload is a bit of a blood bath — including not only the customary assortment of beloved movies for young and old, but also a handful of the streamer’s most binge-able and rewatchable TV series. (Dates reflect the final day of a title’s availability.) 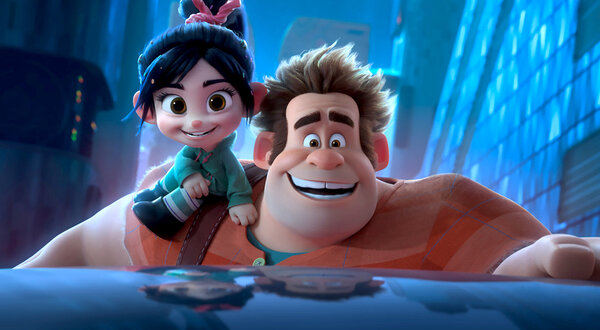 The 2012 Disney animated hit “Wreck-It Ralph” was an enjoyable, pop culture-savvy comic adventure, exploring and satirizing the world of video games (arcade and otherwise) through the story of a game villain (voiced by John C. Reilly), Ralph, who longs to be a hero. It would also seem a difficult concept to continue without veering into tiresome duplication. Yet this 2018 follow-up finds a clever workaround, parachuting Ralph into the internet — and all the algorithms, virality and toxicity that entails. Reilly again makes a sympathetic protagonist, and Sarah Silverman is as delightful as ever as his sidekick and occasional conscience.

This Aaron Sorkin political drama, which ran from 1999 to 2006, has been a Netflix mainstay for years, popular among both nostalgic fans and new viewers attracted to its wish-fulfillment fantasy of functioning, humanitarian governance. Warner Bros., which produced the series, now has its own streaming service, so ‘The West Wing’ will shift to HBO Max (which recently aired a reunion special) at Christmas. It remains potent television comfort food, mixing quick-witted, fast-talking dialogue comedy and warmhearted character drama, loaded to the gills with quotable lines and charismatic performers.

If you’re feeling a bit of superhero movie fatigue, even in this period of relative scarcity, then the idea of yet another cinematic Spider-Man may sound less than appealing. But this 2018 adventure (which won the Oscar for best animated feature) is both a winkingly self-aware commentary and a thrilling story, focusing on the teenager Miles Morales’s discovery not only of his own spider-powers but also of additional Spider-men (and women) from other dimensions. The multi-verse device opens up richly comic possibilities (highlights include a John Mulaney-voiced pig hero, “Spider-Ham,” and a hard-boiled “Spider-Man Noir,” played by Nicolas Cage), without short-circuiting the genuine emotion and heroism.

This Showtime original series, which aired from 2006 to 2013 (a limited series reboot is planned for next year), tested the boundaries of the prestige TV antihero, focusing on a charismatic serial killer. Michael C. Hall (previously of “Six Feet Under”) stars as a police forensic technician who kills the killers that get away, giving the series a flavor of vigilante justice that balances the copious bloodshed. It’s a tricky mixture of dark comedy and gory mystery that doesn’t always come together (particularly toward the end), but at its best — namely, the John Lithgow arc of Season 4 — “Dexter” is a work of wild genius.

Released in 2002, this hit comedy from the director Tim Story spawned two sequels, a spinoff and a television adaptation, but this inaugural entry remains the series’s high point. Ice Cube stars as the proprietor of a Chicago barber shop who sells the business in a fit of frustration and spends the rest of the film’s long, eventful day trying to get it back. But that plot is just a clothesline for the scenes at the heart of the picture, which dramatize the neighborhood barbershop as a hangout spot for jokes, lies and pointed opinions, many of them postulated by the old-timer Eddie (a scene-stealing Cedric the Entertainer).

The director Spike Jonze, who made his name with stylish and freewheeling music videos for the likes of the Beastie Boys and Weezer, made his feature directorial debut with this brain-busting surrealist comedy from the wild mind of the screenwriter Charlie Kaufman (also a first-timer). John Cusack stars as a frustrated puppeteer whose job as a filing clerk leads him to discover a portal into the mind of the actor John Malkovich (who appears, gamely, as himself). A lesser film would have settled on that high concept and ridden it out; Kaufman and Jonze burrow deeper into the implications and possibilities of the nutty narrative, resulting in one of the most imaginatively off-kilter films of its time.

This 2009 adaptation of the memoir by Lynn Barber was the breakthrough film for Carey Mulligan, who stars as a whip-smart but socially awkward 16-year-old who becomes the unlikely object of the affections of a much older man (played, with a delicate mixture of warmth and sleaze, by Peter Sarsgaard). The inappropriateness of the age gap is the film’s subject but not its focus; the intelligent screenplay by the novelist Nick Hornby and sensitive direction by Lone Scherfig are nuanced enough to acknowledge the thrill offered by such a relationship en route to the inevitable heartbreaks and disappointments. The stars sell us on that connection and its slow fraying; the supporting cast, including Alfred Molina, Emma Thompson, Olivia Williams, Rosamund Pike and Dominic Cooper, is first-rate.

Five years after “Malkovich,” Kaufman and the director Michel Gondry collaborated on another indie classic, again transforming a cleverly funny concept — a doctor who specializes in hyper-targeted erasure of painful romantic memories — into an evocative and heart-wrenching meditation on love and loss. Jim Carrey and Kate Winslet (both doing career-best work) are the estranged lovers in question, who wonder a bit too late if their relationship might be worth saving. Kaufman’s melancholy script is beautifully brought to life by Gondry, whose cockeyed visual style is a good match for his screenwriter’s wary worldview.

The Coen Brothers found their first big Oscar success — seven nominations and two wins — with this wildly funny and occasionally disturbing crime story, in which a car salesman (a wonderfully wormy William H. Macy) plots the kidnapping of his own wife in order to extract a handsome ransom from his wealthy father-in-law. The plan goes to pieces, thanks in no small part to a sharp-as-a-tack small-town police chief, played to plucky perfection by Frances McDormand (who won the first of her two Oscars for best actress).

Salma Hayek spent the better part of a decade attempting to play the famed Mexican painter Frida Kahlo in a big-screen biopic, and it’s not hard to see why: It’s an actor’s dream, the opportunity to play a real-life icon, through all of her trials and triumphs. And Hayek is more than up to the task, revealing the breadth and depth of her talent. Alfred Molina is a marvelous shambles as her longtime partner and fellow artist Diego Rivera, while Ashley Judd, Antonio Banderas, Edward Norton, Geoffrey Rush and Diego Luna impress, even in the briefest of supporting roles.

As with “The West Wing,” another longtime Netflix favorite moves to a new, proprietary service (Peacock, in this case) in an attempt to lure subscribers. And the longstanding appeal of this one is understandable. At first a rather ungainly and awkward adaptation of Ricky Gervais and Stephen Merchant’s British cringe-comedy, the American “Office” found its own voice, its own style and its own cast of distinctive and pleasurable personalities. By Season 3, it had become the best kind of sitcom: a “Cheers”-style character-driven comedy with just enough fleeting moments of genuine poignancy and heart.

In June of 1982, Steven Spielberg offered two wildly contrasting notions of suburban America: the sweet surrogate-family alien tale “E.T.” (which he directed) and “Poltergeist’ (which he co-wrote and produced), a nightmare vision of a home possessed and a family ripped apart. The optimistic one broke box office records, but the haunted one has lingered just as long, full of searing imagery (hello, clown attack) and oft-quoted dialogue (“They’re here”). But it’s also a model of humanistic horror; the director Tobe Hooper coaxes grounded, naturalistic performances out of his cast (particularly the stars JoBeth Williams and Craig T. Nelson), well aware that the more believable this family is, the more harrowing their ordeal will seem.

Video games were still a new sensation, and the notion of online interaction seemed like science fiction, when this tense action thriller hit theaters in 1983. Now, in many ways, it plays like a dire warning of things to come. Matthew Broderick (at his charismatically smarmy best) is a high school computer whiz who uses his chunky PC and primitive modem to dial in to what he thinks is a video game company — unaware that he has instead dialed into the U.S. military’s supercomputer and begun a nuclear war simulation. The screenplay (by the future “Sneakers” writers Lawrence Lasker and Walter F. Parkes) is smart and snappy while the director John Badham (“Saturday Night Fever”) orchestrates an effective mix of high-stakes drama and low-key comedy.

It’s always a bit of a bummer when a great movie leaves Netflix, but this departure will probably warm the hearts of a few folks at HBO Max, whose recent adaptation of the titular Roald Dahl children’s novel falls well short of this 1990 version. Known mostly for such decidedly adult fare as “Don’t Look Now,” the director Nicolas Roeg seems to have a great time exploring the grisly darkness of Dahl’s story of a curious young man who discovers a coven of child-eating witches. Ace performances abound, but the standout is from Anjelica Huston, who turns in one of her most deliciously scenery-devouring turns as the Grand High Witch.