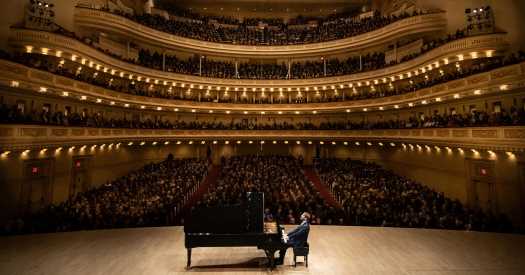 After nearly 19 months without concerts, Carnegie Hall, the nation’s pre-eminent concert space, plans to reopen its doors to the public on Oct. 6.

With the coronavirus still omnipresent, the reopening is a logistical feat, involving questions about air-ventilation systems, crowd control and hand-sanitizing stations.

It’s also an emotional moment for Carnegie, which lost millions of dollars in ticket sales during the pandemic and at one point was forced to reduce its staff by nearly half. The hall is grappling with an anticipated budget deficit of up to $10 million and is planning a lighter-than-usual season of about 100 concerts (versus the usual 150) as it tries to gauge demand.

Clive Gillinson, the hall’s executive and artistic director since 2005, says Carnegie is ready for the challenge. The hall has added entrances, upgraded ventilation systems and increased the frequency of bathroom cleaning.

“We have to keep adapting to whatever the situation is, not only to look after people as best we can, but also for people to feel as safe as they can,” Gillinson said. “It’s reality as well as perception. Both are equally important.”

In an interview, Gillinson discussed the new season, which begins with the Philadelphia Orchestra and its music director, Yannick Nézet-Séguin, performing Shostakovich’s Piano Concerto No. 2 with the virtuoso Yuja Wang alongside works by Valerie Coleman, Iman Habibi, Bernstein and Beethoven.

Gillinson also spoke about the lack of racial diversity in classical music and the return of the arts amid the pandemic. These are edited excerpts from the conversation.

Carnegie has been closed for the longest stretch in its history. Are you confident audiences will come back, especially given the continuing spread of the virus and the need for added safety protocols?

Without doubt some people will be concerned. All I can say is the reaction we’ve had has been the opposite. It’s been that everybody is so thrilled that things are coming back to life again. When we opened the box office, beginning to start on the road back, we had people in tears because they were so excited about actually being able to buy tickets again. But at the same time, we feel we’ve got to look after the people who have still got concerns.

During the height of the pandemic Carnegie was forced to make substantial cuts, including reducing its staff to 190, from 350. How are you planning the new season amid all the uncertainty?

The biggest variables — box office sales and venue rentals — are moving in a good direction at the moment. But that doesn’t mean we count anything as done until we’ve completed the season. You have to be working incredibly hard all the time. You have to be responding to everything that’s happening every day because life just does change every day during Covid.

What are you seeing so far in terms of ticket sales?

The opening concerts look really strong and very positive. The others will continue to sell as we go along.

We deliberately didn’t over-pack the fall. It’s much busier from the new year onward because we just wanted to make sure audiences had time to build up their confidence, and time to really get re-engaged with going out again. So it’s a very deliberate strategy.

Since announcing the season earlier this year you’ve added a few concerts to the schedule, including a complete cycle of Beethoven’s symphonies with Nézet-Séguin and the Philadelphia Orchestra that was supposed to happen last year. How did you decide what to revive?

When we had to cancel because of Covid, I spoke to Yannick and said, “Look, I promise that we will bring this back in the future.” It was something that meant a huge amount to him. The Philadelphia Orchestra commissioned some contemporary works to go alongside the cycle that would actually have some sort of reflection on the world we live in today and look at Beethoven through that light.

The minute we were able to open and the governor gave everybody permission to open with full seating, the first thing I did was phone Yannick to say: “This is it, if there’s any way you can do it. I promised you we would bring this back. How about now?” They jumped at it.

At the same time there are many artists whose concerts were canceled who you haven’t been able to reschedule. How are you dealing with that?

We do feel an obligation to try and bring people back who we haven’t been able to bring back so far. So that’s going to take some time, because if you lose a year and a half of concerts, there’s a lot of concerts. Sometimes the world can move on as well and they’ll be doing other things and there’ll be other repertoire. But we are looking to do the best we can in terms of looking after the people we had to cancel.

Do you worry the pandemic has hurt the careers of rising artists whose engagements at Carnegie or elsewhere were canceled?

One of the things I’ve always felt about what we do is that the great artists will always come through and they’ll always succeed. They’ve got something to say that is really important to people. Something like this clearly will have changed plans and will have delayed very early-days careers. But the reality is, I think talent and great artistry are never lost. That never, ever goes away.

What about smaller venues and less established artists, who suffered a great deal during the pandemic. Do you think they will make a comeback? Has the pandemic fundamentally changed which kinds of artists and groups can survive?

Some of the most innovative, interesting, imaginative work that’s ever happened is going on in New York. It’s the most dynamic scene we’ve ever seen.

They’re very entrepreneurial people. They’re very creative people. And they’ll find a way to survive. It’s not like all us large organizations where we have massive overhead, much of which we can’t change.

The pandemic has made it very difficult for many ensembles to go on extensive global tours, with stops at Carnegie and other venues. How do you think the pandemic will change touring?

You’ve got all the issues like climate change and so on. I think there are going to be a lot more question marks about orchestras at least asking themselves how much touring they should be doing. And I think what they do, they will want it to have greater significance than it had before.

It’s not just a question of touring and saying, “I’ve appeared in this city and that city.” It’s: “What have I left behind? Is there is there a legacy or is this something important that came out of my having been there?”

This season Carnegie will prominently feature Valery Gergiev, the Russian conductor and friend of Vladimir Putin, who will perform a series of concerts with both the Vienna Philharmonic and the Mariinsky Orchestra. How do you respond to those who think he shouldn’t be given such an opportunity, given his silence on abuses in Russia?

Why should artists be the only people in the world who are not allowed to have political opinions? My view is you only judge people on their artistry. If somebody was a racist or somebody said things that were clearly abusive of other races or other people in certain ways, that is completely different and that is unacceptable. But in terms of them being entitled to an opinion which happens to be a political opinion, they have every right as every other single member of society has.

What do you make of the current debate around the idea that classical music, which has long been dominated by white, male composers, is racist, and that it has not adequately grappled with questions about representation and diversity?

If you think of Western culture, literature, painting, music, the bulk of it was done by people who were white in one form or another. And it’s not invalidated. I always worry when people try and apply today’s values to the world of 100 years ago, 200 years ago, 300 years ago, because the fact is, what people were trying to do at that time was completely different and it was relevant for its time. We’ve got to be relevant for our time. Diversity is unbelievably important. That is central to the sort of society we must live in now. And that doesn’t invalidate the fact that there was great art created, and OK, a lot of it was created by white people, and some of it was created by people who were racists.

Carnegie was one of the first institutions to impose a vaccine mandate for audiences. Did you meet any resistance?

I’ve had a very, very small number of emails from people saying: “This is ridiculous. You’re being paranoid. It’s completely unnecessary.” But we know the world we live in has very, very different views on this. We can only have one view, which is, how do we look after people?

How do you see the future of the arts in light of the pandemic?

How people are likely to feel, nobody can judge that. We can’t tell. But I do think the arts will come roaring back.