PARIS — On a recent afternoon, Karidja Touré stood under the gilded arch of the Théâtre du Châtelet’s stage, and listened intently while the rapper and writer Abd al Malik asked her to add some fear to her voice and more agitation to her gestures.

Other cast members for the theater’s upcoming production of Albert Camus’s “The Just Assassins” watched from the wings or from seats in the auditorium.

“We want to see you panic,” Malik told Ms. Touré. “This is a life-or-death situation.”

It was a typical rehearsal that could have played out in any theater, anywhere in France. But one thing stood out: The ethnic diversity of the artists. 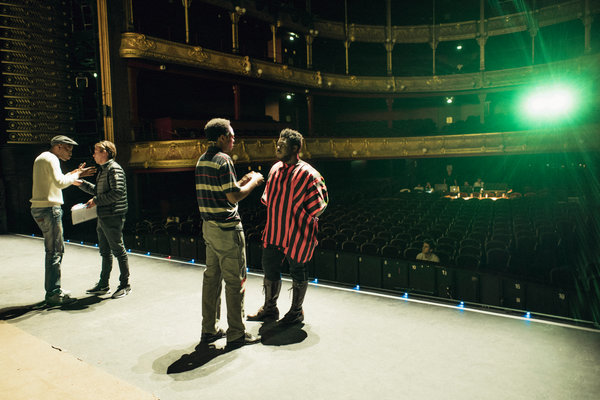 As one of the young actors, Régis Nkissi, said: “Here, onstage, are people like us.”

By “like us,” Mr. Nkissi meant: “Blacks, Arabs, who come from the suburbs, who didn’t think they would do drama one day, even less so at the Châtelet,” said Sabrina Ouazani, 30, an actress with an Algerian background, who stars in one of the play’s main roles.

Written by Camus in 1949, “The Just Assassins” is a classic of French theater. Malik, 44, who is known in France as an author and spoken-word artist as much as a musician, has mostly stayed faithful to the existentialist playwright’s text. But he has given it some modern twists.

Featuring young amateur actors from Paris’s deprived suburbs, who play alongside professionals, and musicians playing hip-hop and R&B, the production opens Saturday and runs through Oct. 19. It will be Malik’s debut as a theater director.

“The Just Assassins” will also be a first for the Châtelet: It is the first play known to be directed by a black artist at the 157-year-old theater, which reopened last month after an extensive restoration.

“My friends tell me that theater isn’t their cup of tea,” said Célia Meguerba, 23, an amateur dancer from the suburb of Aulnay-sous-Bois, whose appearance in “The Just Assassins” will be her first time onstage in a professional show. “It still has a reputation of being for rich people, not for those in the suburbs,” she added.

French theater has long been accused of poorly reflecting the country’s ethnic diversity, and criticism has grown louder in recent years. What should be a mirror of society is broken, experts and actors say, and reflects a distorted reality that leaves out significant parts of France’s population ­— both onstage and in the audience.

In contrast to the overwhelmingly white makeup of many French productions, only three of the 20 actors in “The Just Assassins” are white, and most of the cast have African and Asian origins. “That’s the France I grew up with, the France I live with and the France I love,” said Malik, who spent his childhood in a housing project near Strasbourg, in eastern France.

After casting young actors from the Paris suburbs, Malik worked with them to develop some aphorisms that he has inserted into the play. These additions to Camus’s text reflect contemporary anxieties such as climate change and terrorism, and are chanted by a group of actors onstage at the end of each act. “I wanted Camus’s text to resonate with them, so the chorus could tell us about the youth in 2019,” he said.

The result is what Malik calls a “musical tragedy,” which follows a group of revolutionaries planning the murder of a Russian aristocrat in 1905. Based on a true story, “The Just Assassins” grapples with moral questions: whether important ends justify violent means, and if ideals are worth dying for.

Malik said he aimed to show that actors with non-European immigrant backgrounds can also claim a role in exploring Europe’s past.

“Minority communities have the right to own this history,” Ruth Mackenzie, the Châtelet’s artistic director, said in an interview. She added that she hoped “The Just Assassins” could be a French equivalent to “Hamilton,” the acclaimed musical about the life of the American Founding Father.

Ms. McKenzie, a British arts administrator who was asked to lead the Châtelet in 2017, has developed a long-term plan for the theater called Châtelet 2030, which sets out her vision to “attract the diversity of Greater’s Paris population,” and “The Just Assassins” is part of that mission.

Other French theaters have also developed programs to promote inclusion. A training scheme, First Act, developed at the National Theater of Strasbourg, has trained more than 80 actors from underrepresented backgrounds since 2015. At the National Drama Center in Normandy, the artistic director, David Bobée, has committed that 30 percent of the actors and directors who work at the theater will be from ethnic minorities.

But institutions still have a long way to go. The Comédie Française, France’s most storied theater, is still overwhelmingly white: Only three of the 59 actors in the permanent company are black. France has five designated “national theaters” (of which the Comédie Française is one): four of these have white artistic directors; among the leaders of the 38 publicly funded theaters across the country in the next tier of prestige, 36 are white.

Gerty Dambury, a writer and theater director from Guadeloupe who co-founded the activist collective Decolonize the Arts, said only long-term initiatives, not isolated projects, could make France’s theaters more diverse.

“Recruiting in theater schools has changed, but it takes time to bear fruit,” Ms. Dambury said.

And stereotypes can be deeply rooted. At the Festival d’Avignon this summer, Ms. Dambury said she was asked by a white director to soften her accent and “speak straight.”

At the Châtelet, Malik has told actors to speak as they usually do. He saw their accents “as a plus, not as something we should get rid of,” Ms. Ouazani said.

Moriba Bathily, 20, an amateur singer from the suburb of Clichy-sous-Bois, said he saw Malik as a role model who had showed him that he, too, could succeed in the arts.

“I grew up in a ghetto, I still live there, but today I’m part of a chorus in a Camus play directed by Abd al Malik at the Châtelet theater,” said Mr. Bathily. “Doesn’t it speak for itself?” 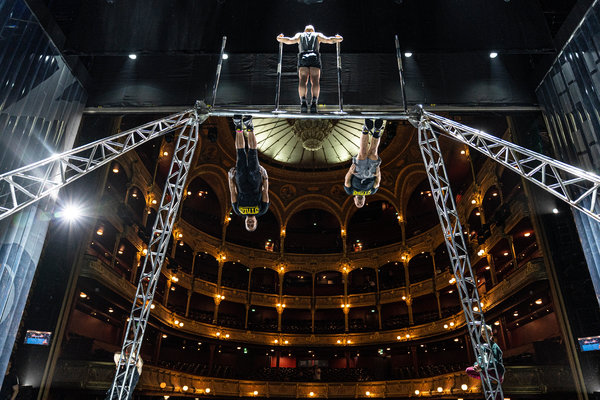 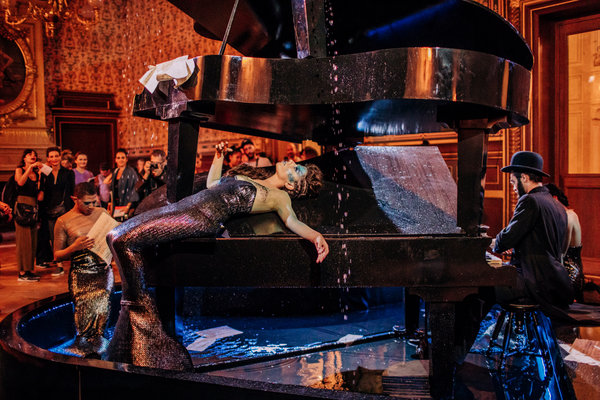 Elian Peltier, a reporter in the Paris bureau covering France, has been writing for The Times since 2015. @ElianPeltier