Broadway is going to remain closed at least through next May 30, which is 444 days after all 41 theaters went dark in as part of New York’s effort to slow the spread of the coronavirus.

On Friday, the Broadway League, a trade organization representing producers and theater owners, announced that it was suspending all ticket sales through that date.

But when will Broadway actually reopen?

“That’s the question of the hour and the day and the month and the year, because we truly don’t know,” Charlotte St. Martin, the League’s president, said in an interview on Friday. “Certainly a lot of shows are making their plans, and some think we will open in the summer, and I hope they are right. But I think people’s bets are the fall of next year.”

A League statement suggested that producers imagine a staggered reopening, rather than all theaters opening at once. “Dates for each returning and new Broadway show will be announced as individual productions determine the performance schedules for their respective shows,” the statement explained. St. Martin said the reopening dates will be determined by producers working with theater owners.

The continued shutdown means a delay for “The Music Man,” a lavish revival starring Hugh Jackman and Sutton Foster, which was initially scheduled to open next week, then chose an opening of next May 20, and will now have to try again, as well as for “MJ,” a Michael Jackson biomusical that had planned to open this summer, and then next spring, and now will have to reschedule.

Several other shows that had initially planned to open last spring had chosen rescheduled opening nights next spring that will now need to be rethought, including the new play “The Minutes” as well as revivals of “American Buffalo,” and “Take Me Out.”

With no clear path to reopening, the shutdown is costing huge amounts of money, not only to producers and performers, but also to backstage workers, Times Square restaurants, and the city itself in the form of lost tax revenue. The shutdown is also endangering the careers of artists, and the prospects of artistic works, as the nation’s premiere stages are stilled indefinitely.

All Broadway theaters closed on March 12 as part of an effort to slow the spread of the coronavirus by limiting large gatherings; at the time there were 31 shows running, including eight still in previews, and another eight were in rehearsals getting ready to start performances. The Broadway League, the trade organization representing producers and theater owners, at first closed theaters through April 12; it has repeatedly extended the cancellations, most recently through Jan. 3.

“There would be nothing better for everyone than if we had a date certain, but there isn’t one — this is a global pandemic,” St. Martin said. “Do you think I like putting out these statements four times? No! And God, I hope we only have to do it one more time. But we don’t know.” 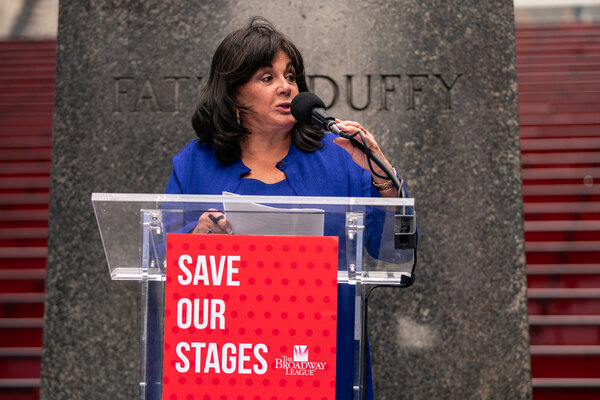 Broadway is not only the pinnacle — and best-paying workplace — of the American theatrical landscape, but it is also big business, or at least it was. In 2019, the industry’s theaters drew 14.6 million theatergoers and sold $1.8 billion worth of tickets. This year, the grosses are likely to be a tiny fraction of that amount, since theaters were only open for 10 weeks at a time of year when attendance is usually soft.

Although television and film production are resuming, the performing arts remain almost completely shut down, at least at the professional level, in New York and throughout much of the nation.

The Metropolitan Opera announced last month that it would remain dark until next September. And even before that announcement, some theaters had already made the same decision: a few days before the Met announcement, Trinity Rep in Providence said it would delay in-person productions until next fall, while Hartford Stage, in Connecticut, had taken the same step in July.

Theaters have been reopening more rapidly in Europe, although with social distancing, which Broadway producers say is not economically feasible here. Broadway faces multiple challenges to reopening during the pandemic: its public and backstage spaces are cramped, its audience is heavily dependent on tourists, and producers need to sell a lot of tickets to recoup their costs, making reduced capacity an economic nonstarter.

St. Martin said it is not realistic to expect that Broadway will wait for everyone to be vaccinated before reopening, given public skepticism about vaccines.

Instead, she said, “there has to be a medical or scientific change. We’re hoping for completely reliability of rapid testing, combined with other medical or scientific enhancements for the audience and the cast and crew. Many products are being tested which are promising, and a combination of those would bring us back. And yes, we’d love a vaccine.”

St. Martin said that, however long it takes to reopen, she is confident that Broadway will ultimately bounce back.

“We survived the Great Depression and many other crises,” she said. “I just don’t think we live in a country or a world that wants to be without theater.”