The day he learned he had cancer, Brice Marden, among the world’s most celebrated artists, made one of his much-coveted drawings: a field of dense interlocking loops loosely inspired by Chinese calligraphy, a signature theme. It is both abstract and hypnotic, begging viewers to look closely at the finely wrought composition. But what makes this drawing different is its raw intensity and the unusually dark, brooding palette.

While the work was a private musing — one page in a notebook filled with drawings — his illness has been unusually public. The news shot cannon-like through the art world when, on Sept. 6, 2017, Helen Marden, the artist’s wife, who is also a painter, photographed her husband while he was undergoing chemotherapy at Memorial Sloan Kettering and posted it on Instagram.

“I wanted to make it accessible,” Ms. Marden defiantly explained. “The more you put it out there, the more comfortable people are with it. I also was hoping that by making it public it would help others.”

And it has. Ms. Marden said she has heard from total strangers who are going through similar treatments — the artist has rectal cancer — who have thanked her for her candor.

After her initial post, many assumed that Mr. Marden would slow down a bit but instead he has become more prolific than ever, painting or drawing every day even when he travels, which seems constant.

“I guess I was lucky,” the artist said on a recent wintry afternoon, perched on a sofa in his studio here, a converted carriage house with sweeping views of the Hudson River that is part of Rose Hill, the couple’s home. Looking as he always has, with gray curls peeking out of his signature wool cap, black jeans and a plaid scarf, he went on: “I have been able to work through it all. It hasn’t made me hurry things up. It hasn’t made me work any differently. It’s just been an extra thing to think about.” 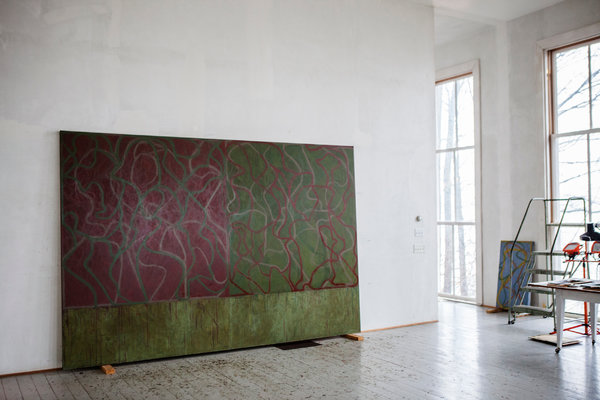 In October, the month he turned 80, “Moss Sutra With the Seasons,” the largest commission of his career, was unveiled at Glenstone, the private museum in Potomac, Md., that is the creation of Mitchell P. Rales, the Washington industrialist, and Emily Wei Rales, his wife and a curator. Hanging chapel-like in a specially designed gallery, it is composed of five panels and took five years to complete. The painting is a visual diary of sorts, incorporating the artist’s most familiar stylistic elements — from monochromatic compositions reminiscent of his work from the 1960s when he used a kitchen spatula instead of a conventional paint brush, to recent loops of calligraphic shapes.

“When people stop in that room they suddenly get really quiet,” Ms. Rales noted. The Raleses have been collecting Mr. Marden’s work for years. Its enduring quality, they say, is one reason. Another is the artist’s singular vision: he has spent his career exploring abstraction in many forms. “Who else do you know that has a style like his?” Mr. Rales asked. “There are very few painters who are so unique, so labor intensive and so accomplished.”

While Mr. Marden is reluctant to discuss his health — and is determined not to make it the center of his life — he did say that he has had good news from his doctors and is having regular sessions of immunotherapy, with minimal side effects.

After his diagnosis, Mr. Marden said his first thought was “wait a minute, I’m supposed to die. It’s a reality,’’ adding that he feared the Glenstone project “might be my last, it had taken so long.” But then he began creating new paintings that were all in terre verte, a green pigment made from the earth. “They came very fast,” he said, explaining that he hasn’t stopped working since.

A younger generation of painters seem to be paying attention. “He’s an inspiration because he stays in front of the canvas,” said the British artist Chris Ofili. “Even in this digital and mechanical age it is his commitment to old-fashioned painting, but painting that has a kind of freedom to it.”

In July the artist had a sellout, one-night-only exhibition and dinner at Villa Malaparte, the 1938 Modernist house perched over a cliff on the Gulf of Salerno in Capri, Italy. Organized by the artist’s dealer, Larry Gagosian, the evening attracted collectors from Qatar to Beverly Hills — art world personalities like Steven A. Cohen, the hedge fund manager; Nicola Del Roscio, president of the Cy Twombly Foundation; and Jimmy Iovine, the record producer, who arrived with LeBron James.

A few weeks later Mr. Marden was again in the spotlight, this time closer to home at Bard College, where four of his canvases were transformed into scrims for the new staging of T.S. Eliot’s poems “Four Quartets,” the work of the choreographer Pam Tanowitz and scenic designer Clifton Taylor. Alastair Macaulay, then the chief dance critic of The New York Times, called it “some of the finest stage imagery of our time.” (The production opens at the Barbican in London in May.)

A traveling show of 60 drawings will arrive at the Gagosian Gallery in Paris on April 4, having been on view at the Yves Saint Laurent museum in Marrakesh. It includes studies for six new paintings that are in various stages of completion in his Tivoli studio. (The new Menil Drawing Institute in Houston is also planning a major exhibition next February.)

Drawings have long been a critical first step to what eventually ends up on the canvas. “I always have a notebook going so I’m not scared to death when I start painting,” Mr. Marden said.

When he is not traveling the artist spends most of his time in Tivoli, in a large studio composed of rooms filled with paintings and drawings; carefully labeled paint samples, as well as sticks gathered from the surrounding landscape, which he dips in ink to draw. The atmosphere is mostly quiet except for the occasional loud whistle of a passing train.

That his studio is not far from either Olana, home of the painter Frederic Edwin Church, or that of another American painter, Thomas Cole, is not lost on Mr. Marden. The history of these artists has been ingrained in his memory since childhood. Growing up in nearby Briarcliff Manor, his father, a mortgage servicer, worked along the Hudson. “My father loved the river,” Mr. Marden recalled. “Often after dinner he’d say let’s go out and watch the sun set.” Not surprising then, that the landscape — the green of the moss on the trees; the light coming off the river; the changing seasons — influences his color palette.

These traditional references are also a reflection of his education, first as a student at Boston University, a place Mr. Marden described as “deliberately conservative,” and later at the Yale School of Art. After graduating from Yale in 1963, he moved to New York and became a guard at the Jewish Museum just as Jasper Johns was having a retrospective. “Jasper has been a big influence on my work and my thinking,” Mr. Marden said. “He added another dimension to what is reality in painting. Is a flag real?” Mr. Marden remembers being so shy during his time at the Jewish Museum that he enlisted a guard to ask Mr. Johns to sign the show’s flag poster.

Three years later, in 1966, the artist had his first one-man show — monochromatic paintings and drawings — at the Bykert Gallery on West 57th Street in Manhattan. Reviews were mixed. Klaus Kertess, the gallery’s co-founder, advanced Mr. Marden $700 to buy paint for the show. “The money ran out the same time the show did,” Mr. Marden said. Through his friend, the artist Dorothea Rockburne, he was able to get a job as Robert Rauschenberg’s studio assistant, where he worked for four years.

The New York art world was a small, cozy community in those days as Abstract Expressionism was fading from the spotlight and Pop and Minimalism were beginning to emerge. But these days Mr. Marden feels far more akin to the spontaneity of the Abstract Expressionists. “I’m a great believer in late Jackson Pollock,” he said, showing a visitor a reproduction of “Scent,” one of Pollock’s last paintings, a dense work from 1955. “I have looked at that painting so hard I think I see things happening in it.”

It is that kind of depth and feeling of movement that he is trying to achieve in the six new canvases in various stages of completion in his studio.

While most artists generally don’t let outsiders see their works-in-progress, Mr. Marden is surprisingly candid, talking about what it takes to create a painting and his constant struggle to achieve the desired effects. He is soft-spoken and direct when discussing his process and often, after explaining something, he pauses, and then bursts out laughing. “If there’s a conscious thing — and there is — I don’t want to say it’s spiritual or get into some new age-y kind of thing, but they’re all based on intuition,’’ Mr. Marden said.

He often starts by drawing a grid of black markings, which become the underpinning of a work. In the body of this new canvas, the grid is made up of a square of 15 marks by 15, which is all that is visible right now.

How did he choose 15? “A numerologist once told me that my number is 6 (1+5 = 6) and someone said it was a Buddhist number but nobody told me why,” Mr. Marden said with a chuckle. It is from there that he starts to build the composition — slowly, layer upon layer — often scraping things off the surface that he doesn’t like or simply painting over them, but leaving vestiges of what is underneath visible. These are in the early stages, he warned. “By the time they are finished, they could look very different.”

In his latest paintings Mr. Marden is going back to his more calligraphic motifs, but this time the perspective has changed. He has purposely left the sides of each painting spare with just a lightly, scraped-down color so the viewer’s eye is forced right to the center, where the composition is filled with interlocking shapes. He is also experimenting with bolder colors — one canvas is the shade of a cantaloupe — and there is even a painting in which he is experimenting with white. “White to me has always been a corrective color. You paint things out with white,” Mr. Marden said. “I’m trying to break my own rules.”

These compositions reflect decades of reading the work of figures including Kenneth Rexroth, an American poet who was also a translator of Chinese, Japanese and classic Greek poets. (Mr. Marden’s Cold Mountain Paintings, perhaps his most famous body of work, from 1989-91, were inspired by the writings of the ninth-century Chinese poet Cold Mountain (Han Shan.) While traveling Mr. Marden visits flea markets and galleries looking at ancient art and has taken to collecting the naturally occurring rocks from riverbeds and mountainsides admired by Chinese scholars, who believed they could find paradise inside these spirit stones. Their shapes and surfaces, smooth or textured, energize Mr. Marden, too. “At a certain point, I started looking beyond Western art,” he explained.

That was more than 30 years ago. Today, he is still experimenting.

“I’m deliberately trying to be more intuitive and going for something that is more natural,” he said. “I’m not thinking of these paintings as a kind of summation. I’d rather they lead to something else.”