His words rang true as I watched the four-opera “Ring” over four evenings, 18 hours in all, at the Metropolitan Opera last week, the finale of the company’s two-month Wagnerian immersion. I hadn’t thought it possible: Robert Lepage’s much-warred-over production of the “Ring” now makes for decent drama.

When it was new at the Met, nearly a decade ago, Mr. Lepage’s “Ring” was simply a mess. Millions of dollars — and a reinforcement of the theater’s stage — in the making, the 90,000-pound set kept malfunctioning. Plainly afraid of being injured, the singers seemed ill at ease, the acting an afterthought. The star soprano could barely make it through.

Years of attention seemed to have gone into expensive, wonky animated projections that splashed onto the seesawing set to suggest the cycle’s shifting locales, from the bowels of Nibelheim to Valhalla in the clouds. Falling well short of his goal of presenting Wagner’s stage directions literally, Mr. Lepage didn’t even convey the basic plot — let alone the spectacle’s larger issues, why it should matter.

With the global economy in crisis and austerity measures strangling societies — and opera companies — worldwide, the exorbitant, empty-headed staging felt out of step with the times, a creaky extravagance from an art form perennially dismissed as just that.

Fast forward six or seven years. Thanks to yet more investment in it, Mr. Lepage’s extravagant “machine” now creaks rather less. Last week’s cycle, the final of three this spring, passed without major glitches. And an emboldened, articulate cast sang superbly and made the human stakes of the “Ring” far clearer than before. 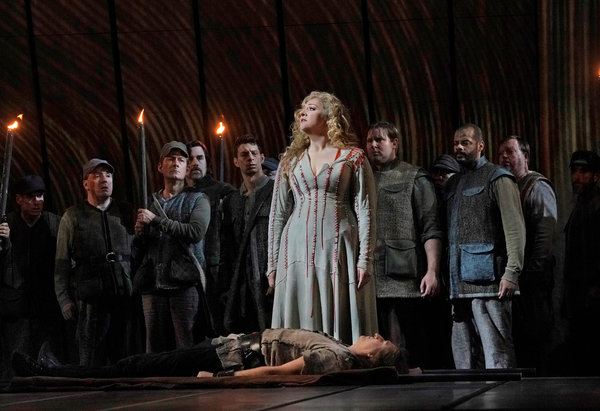 [Read about seeing the “Ring” from the cheap seats.]

In 2012, it had taken until the entrance of Waltraud Meier as Waltraute, a couple of hours from the cycle’s end, to convey the story’s urgency. Now, that person-to-person drama was palpable from practically the beginning, as Michael Volle’s already world-weary, aging patriarch of a Wotan confronted Jamie Barton’s fervent Fricka in “Das Rheingold,” and they actually seemed to be listening to one another.

Where the scenes for the Gibichung siblings in “Götterdämmerung” had been bland, there was now a curdled charge, and, in that opera, a crushing realism in Brünnhilde’s acquiescence in what is, essentially, her own rape. There, as elsewhere in the cycle, Christine Goerke was a perceptive and responsive presence, her face an open book of emotion, building to a powerful yet modest, human-scale Immolation Scene.

If only the orchestra had been nearly so characterful. While Philippe Jordan’s conducting had moment-by-moment fleetness, and agile responsiveness to the singers, there was no sense of long-arching accumulations of intensity, little variety of mood or color. The sound was thin, murky and diffuse, like a cloudy broth; the brasses were inelegant even when not flubbing.

There are arresting moments in the physical production. Back in 2011 I had found the projected avalanches that forlornly cascade down a mountain during Wotan’s confrontation with Brünnhilde distracting in “Die Walküre”; now they felt poetic. When it was covered in 3-D images as it twisted into craggy formations, the set was still capable of taking my breath away.

But for all its scenic sweep, the “Ring” is actually not in constant transformation. Whole hours pass with characters merely talking to each other, a spectacle closer to Ingmar Bergman than Cecil B. DeMille. Single-mindedly focused on the DeMille aspects, the changes of scene that make up a tiny fraction of the run time, the Lepage “Ring” won’t stop answering the wrong question.

The production goes to the heart of a debate that still roils opera. No theater fan in 2019 thinks that “Hamlet” can only be mounted with Elizabethan costumes and the precise observance of Shakespeare’s stage directions. But there’s a loud contingent of operagoers who are scandalized if Violetta in “La Traviata” wears a red slip rather than crinolines, or if the “Ring” forgoes breastplates and spears.

But though he cared deeply for the trappings of the myths from which he formed his “Ring,” Wagner ultimately meant those horned helmets and realistically frolicking Rhinemaidens to be a vehicle for his philosophical preoccupations: tangled layers of social utopianism, anarchism, love-conquers-all humanism, renounce-the-world nihilism.

Those tangled layers — Wagner’s ambiguity about the meaning of the “Ring” — make it clear that every audience needs to find its own explanations for the rot that is at the heart of the cycle’s world. Is it social inequality? Capitalism itself? Misogyny? Environmental destruction? Racial oppression?

All of the above is there in the libretto, even when you do it with horns and spears. But, if only given the cycle’s length and complexity, it seems merely responsible for a director to offer some intervention; to guide the audience through the sprawl; to emphasize some themes more than others; to be explicit about contemporary connections; to interpret the characters afresh; to untangle Wagner’s layered meanings with a personal slant.

Mr. Lepage’s fantasy of neutrality — the denial that there might be more stimulating ways to spend many millions of dollars than trying, with varying degrees of success, to capture 19th-century stage directions word for word — strikes me as perverse. He might justify his relentless attention to the visuals, at the expense of a deep reading of this rich text, as a post-ideological reaction to politically charged “Ring” stagings of the past half century. But his work simply pales — in interest, intellectual heft and sheer beauty — next to so many of those efforts.

Thankfully the Met did eliminate a final indignity from the production’s original run: the weakly exploding heads of statues of the gods as the world ends. Now, the statues poke up in the far background before keeling over unobtrusively.

It remains telling that the Met’s “Ring” — the prime stated purpose of which is to evocatively handle scene changes — is so incoherent in this final sequence of apocalypse, the grandest series of transitions in the cycle, precisely described in Wagner’s libretto. Mr. Lepage soon just gives up: Much of the stirring parade of leitmotifs simply plays over a projected wall of rushing water, the return to the Rhine with which the “Ring” began, many hours before.

Asked if the production would return in the future, Peter Gelb, the Met’s general manager, said through a spokesman that “we’re not planning that far in advance.”

But on Saturday evening, the water projection continued a moment too long, flashing onto the final curtain. Even in its new, less creaky, more compelling incarnation, the Lepage “Ring” has still overstayed its welcome.