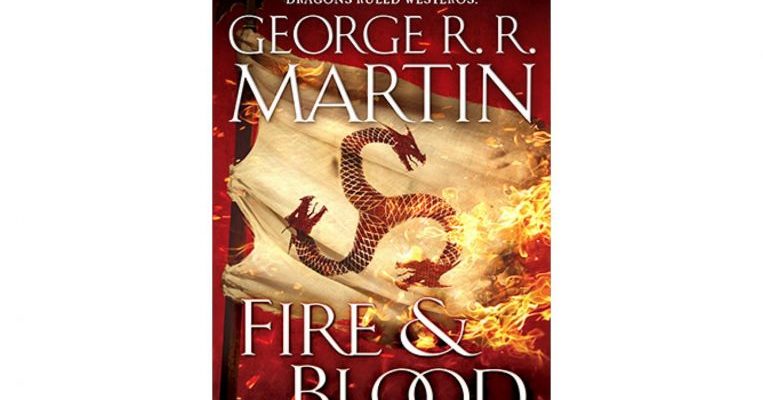 So what is fantasy author George R. R. Martin doing in lieu of actually finishing his epic A Song Of Ice And Fire series, which gave rise to the hit HBO television show Game Of Thrones that has since gone its own way with regards to a finale?

He is working on other TV shows, including five Game Of Thrones-related shows and the screen adaptation of Nnedi Okorafor’s afrofuturist novel Who Fears Death (2010), for which he is executive producer.

And now, he has produced a history of the fictional land of Westeros that runs to more than 700 pages – and barely scratches the surface of what readers truly want: namely, The Winds Of Winter, the long-promised sixth volume in A Song of Ice and Fire series, and its near-mythical sequel A Dream Of Spring.

Fire And Blood is written as a historical account of the Targaryen kings, the dragon-riding, incest-loving, pale-haired race that violently conquered Westeros 300 years before the events of A Game Of Thrones.

By the latter book, the Targaryens are an exiled race – you can count the ones left alive on one hand – but Fire And Blood is stuffed to the gills with Targaryens, beginning with Aegon the Conqueror who, with his sister-wives Visenya and Rhaenys, sweeps through Westeros blasting the Seven Kingdoms into smouldering submission. It is a marvel how far incest and superior firepower can get you in the colonising game.

Fire And Blood will be a treasure trove for hardcore fans and perplexing to everyone else, not least because the Targaryens are not particularly creative in their naming traditions.

There are at least seven Aegons, two of whom are on opposing factions in an internecine war so complicated that this reviewer had to draw a table to keep the two sides straight.

What this history loses in confusion, it makes up for in colour. There are epic battles on dragonback, statecraft and skulduggery. There are also killer nuns, a Cinderella-esque ball that devolves into a cattle show and a dwarf jester called Mushroom, whose account of court intrigue is consulted by later historians despite its rampant ribaldry. The book benefits hugely too from Doug Wheatley’s lively illustrations.

Still, it is far too full of tangents that seem intended for difficult trivia nights, rather than actual reading pleasure. Must one really know the names of the seven knights who rode out on such and such a day, are all killed and never appear again? Does it really matter which unlikely lads this teenage princess slept with? One feels not.

Dismayingly, the book ends with a whimper rather than a bang somewhere in Aegon III’s reign, with more than a century to go before the fall of Aerys II the Mad King from which A Game Of Thrones follows.

At this point, one despairs of A Song Of Ice And Fire ever coming to an end. If even the distractions from the main event suffer problems of completion, what more the two most anticipated books in epic fantasy today?

What is dead may never die, as the Ironborn clan in the books would say. Perish the hope of these books ever ending. Then, should they ever do, it will be a happy surprise.

If you liked this, read: The Silmarillion by J. R. R. Tolkien (HarperCollins, 1977, reissued 2013, $18.28, Books Kinokuniya), a posthumously-published prequel to his epic The Lord Of The Rings which collects tales from the creation of the world of Arda to the tragedy of the lovers Beren and Luthien and the fall of the hidden city Gondolin.