KNOXVILLE, Tenn. — The Big Ears Festival started 10 years ago, disappeared, returned, reorganized as a nonprofit and has quietly grown year by year, filling theaters, clubs and galleries in downtown Knoxville. About 18,000 people attended this year’s festival from March 21-24. Rejecting musical genre classifications and spurning descriptions like “avant-garde” or “experimental,” Big Ears has never spelled out its aesthetic guidelines, and by now it doesn’t have to. It draws an audience that’s curious and ready to listen intently.

It featured multiple concerts of music by the pioneering Minimalist composers Alvin Lucier and Harold Budd; it celebrated the unconventional vocal techniques of the singers Joan La Barbara and Meredith Monk. It honored the 50th anniversary of the jazz-and-beyond label ECM Records and it gathered luminaries from Chicago’s “Great Black Music” collective, the Association for the Advancement of Creative Music.

Instead of sales metrics or star power, Big Ears contemplates the perceptual properties of music: shades of dissonance and consonance, the particular qualities of a drone, the ever-changing applications of subtlety and brute force. There was music to soothe, music to jolt, music to ponder and music to dance to. Here are 15 of the most intriguing performers and performances.

Shabaka Hutchings: Sons of Kemet and The Comet Is Coming 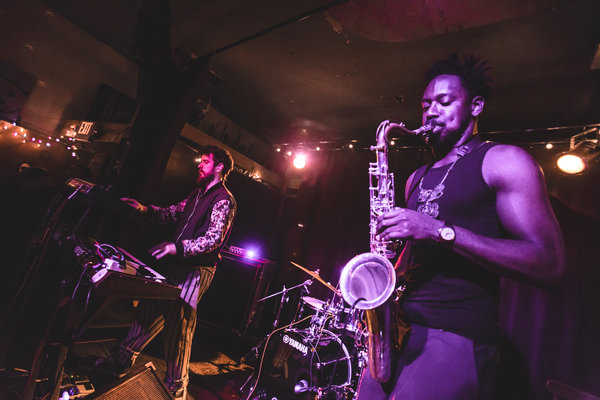 The English musician Shabaka Hutchings brought two of his groups to Big Ears, both of them built around his fat-toned, indefatigable tenor saxophone with beats derived from dance music and — his far-from-secret resource — carnival rhythms (he has Barbadian roots). He allows himself an extended solo now and then, but most of the time he pumps out short, hard riffs, all sinew and drive. Sons of Kemet is a four-piece band: just Hutchings, two drummers, and a tuba player who occupies the entire low register. It was muscular enough, but a late-night club set by The Comet Is Coming — Hutchings, a drummer, and a keyboardist who cranked up distorted rave bass lines — was so forceful it set off a mosh pit.

The Canadian composer Kara-Lis Coverdale has released diverse albums of electronic music; she has also worked since her teens as a church organist. She used the pipe organ at the Church Street United Methodist Church for an eerie 47-minute piece that started with one of the very highest notes of the organ, alone: a keening whistle from somewhere far out of reach. Much of the piece stayed in those distant realms, sustaining tones beyond the power of human breath and letting tentative melodies hang in midair. She barely touched upon the earthy heft available in the organ’s lower register; this was an elevated, disembodied contemplation, patiently celestial.

This Is Not This Heat

When punk had barely dawned, This Heat was already post-punk. From its start in 1976, This Heat was a contrarian band, dispensing corrosive noise, intricate math-rock patterns and cryptic, often politically charged lyrics. Two of its founders, Charles Bullen (on guitar) and Charles Hayward (on drums), revived the band’s repertoire in 2016 with This Is Not This Heat. Its Big Ears set was utterly precise in its cantankerousness, from the electronic screeching that ushered the band onstage to songs that blared and stopped cold, droned steadily or crashed and flailed, and set the Declaration of Independence to Arab-tinged reggae (in “Independence”); the songs’ bristling cynicism defies obsolescence.

Big Ears, the group announced, would be its next-to-last show.

Strictly speaking, Artifacts Trio — Nicole Mitchell on flute, Tomeka Reid on cello and Mike Reed on drums — started as a cover band. In 2015, the 50th anniversary of the Association for the Advancement of Creative Music, the trio revived compositions from the multitude of albums the association’s members have released: some swinging, some introspective, some textural. The lean, straightforward trio format and the tricky but frisky repertoire made an ideal showcase for Mitchell’s prodigious, playful virtuosity and Reid’s double duties of propulsion and melodic counterpoint.

Playing solo classical guitar in ways that blur easy classifications of folk or jazz, Ralph Towner makes it seem as if his music were inventing itself on the spot. Phrases of melody appear in fluctuating tempos, as if they just occurred to him, soon followed by knotty chords that instantly recast the tune; swinging rhythms arise, take over for a while, then melt away. Each detail arrives as a discovery, though it’s clear that Towner has deep structure behind his spontaneity. He unveiled some brand-new pieces, and he cheerfully noted his recovery from triple-bypass surgery by playing a standard: “My Foolish Heart.”

The methodical turns exhilarating in the music of Nik Bärtsch and his quartet, Ronin. Bärtsch starts with patterns — often a terse little riff in an odd meter — that get stacked up in countless ways, ricocheting from keyboard to bass clarinet to drums to electric bass, getting subdivided or having multiple instruments suddenly pile on. The repetition comes from Minimalism, the rhythmic flair from jazz and the unabashed impact from rock as all the parts click into place.

Since the 1960s, Richard Thompson has been writing songs that face the bleak realities of mortality and hard luck. Backed by a string orchestra, he performed “K.I.A.: Killed in Action,” a set of songs about World War I based on letters and diaries from the era. It was somber, detailed and unflinching, with the strings as full participants. When Thompson sang “Gas,” about soldiers confronting poison gas for the first time, sustained strings switched to brittle pizzicato, conveying the sudden feeling of being unable to breathe.

Lonnie Holley with the Messthetics

Lonnie Holley, a widely collected sculptor and painter from Alabama, started recording music in 2006 and released his first album in 2012, when he was 62. His voice is a bluesy, otherworldly moan with a hint of Sam Cooke and an occasional growl; his songs are verbal and musical improvisations, ruminating on the state of the world and the state of his soul. The Messthetics backed him on Friday afternoon with leisurely vamps topped by echoey keyboard and guitar as he sang about a fallen angel and about trying to reach the doorknob to heaven. His family once hoped Holley would be a preacher; between songs, he warned about a digital landscape where the “playground of foolishness” soon leads to the “quicksand field of stupidity.”

All dressed in white, Meredith Monk and her four-woman ensemble of singers, dancers and musicians performed “Cellular Songs,” a collection of pieces that contemplates both biological cells and musical ones: the little cyclical figures that Monk assembles into compositions. With wordless syllables and occasional lyrics, and vocal styles suggesting a world of allusions, the songs hinted at games and rituals, with hints of comedy, and a group embrace at the end became an affirmation of solidarity.

For decades, the Art Ensemble of Chicago was a close-knit quintet, until the deaths of some founding members. But at Big Ears, the Art Ensemble — still including its founder Roscoe Mitchell on alto saxophone and its longtime drummer, Famoudou Don Moye — appeared with more than a dozen musicians, including strings, brass, theremin, a singer (Rodolfo Cordova-Lebron) and a poet (Moor Mother). Its set was just as sprawling, touching on improvisational orchestral squall, dissonant chamber-jazz, a kind of parlor song and a musical jungle full of birdcalls. Its best moments were its most focused ones: swinging vamps propelled by Moye’s drumming, pointedly political poetry declaimed by Moor Mother — her “We Are on the Edge” is the title of an Art Ensemble album due April 26 — and a perpetual-motion tour-de-force by Mitchell, using circular breathing for a stretch of nonstop piping and squealing and scurrying that insisted, without a word, that after 50 years the Art Ensemble isn’t finished.

Harold Budd’s compositions are often sparse and meditative, contemplating a handful of notes reverberating into silence. In a concert featuring new pieces, a small ensemble of instruments including harp, orchestral chimes, keyboard and cymbal shared momentary clusters of notes or fleeting motifs, like bits of crystal briefly catching the light.

How would Josiah Wise, who records as serpentwithfeet, turn his studio-constructed, intricately overdubbed, often mournful and tormented songs into live performances? Two ways: with impassioned live vocals over prerecorded tracks and in solo piano versions. The canned music barely impeded the emotional power of his more drum-driven songs, and when he was at the piano, the songs shaded in and out of droll, spoken-sung monologues. As he courted singalongs, self-questioning turned into self-acceptance.

A composer who has been working with electronics and samples since the 1970s, Carl Stone delivered a disorienting barrage from his laptop: bristling, relentlessly repetitive, stereo-hopping, rhythmic but dance-defying tracks that were so densely layered they seemed to raise the atmospheric pressure in the club.

The new-music string quartet Brooklyn Rider has been collaborating for a decade with Kayhan Kalhor, who was born in Iran and plays the classical Persian spike fiddle called the kamancheh. They’ve learned from each other, with Brooklyn Rider picking up Persian inflections and bowing techniques and Kalhor adapting a traditional solo style to move in and out of the string ensemble. Their shared pieces orchestrated the kemancheh’s bite, and its echoes of ancient melodies, with harmonies and arrangements that extend and stoke the drama.

No one can say Nils Frahm didn’t have enough equipment. He had two nests of multiple keyboards onstage for a solo show, and he used them all strategically: starting with toy-piano sounds and escalating through track upon track of keyboards and electronics, little melodies and blipping rhythm loops, showily adding each layer. When he settled down to a piano, the music drooped into new-age territory, but his hyperactive one-man-band act kept things popping.