The myth of the war photographer is hard to dispel. Infused with machismo, the Hollywood archetype is the hard-living, scarf-wearing loner dashing from one war zone to the next, with romantic partners as expendable as bullets. But clichés ignore the doubts, fears and moral quandaries as well as the loneliness and pain that shadow those who document the depths of human depravity. Such emotional whiplash creates that other cliché — of the tragic, fallen heroes (or heroines) broken by the horrors they’ve witnessed.

The reality of the war photographer is, of course, far more nuanced.

The psychiatrist Anthony Feinstein explores this complexity in his book, “Shooting War” (Glitterati Editions). Starting with a single, striking image from each photographer, Dr. Feinstein profiles 18 conflict photographers, including Don McCullin, Tim Hetherington and Corinne Dufka, and examines their motivations, traumas, and, most important, their resilience.

“Unlike soldiers, they are not schooled in violence,” he writes. “And yet their longevity on the front lines is unequaled. Time and again they return to the fray, knowing all too well the toll that in the end is likely to be exacted.” 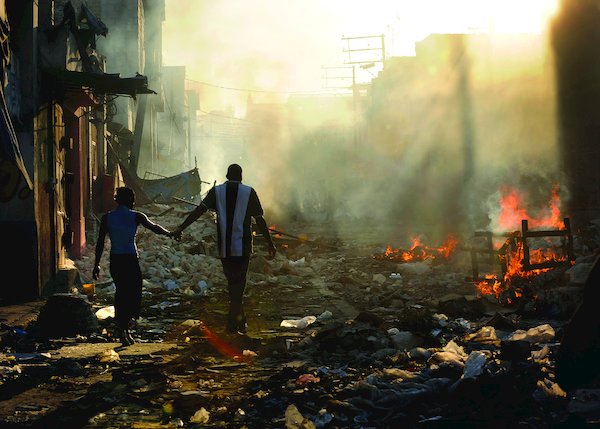 Dr. Feinstein is well qualified on this subject. As an unwilling conscript into the South African Army as a young doctor in 1982, he saw combat in Namibia. Decades later, he conducted the first studies on trauma among war journalists and wrote a book, “Journalists Under Fire: the Psychological Hazards of Covering War,” based on the results. The book was also the basis for a documentary film he produced titled “Under Fire,” which was shortlisted for an Academy Award and won a Peabody Award. In Toronto, where he lives, he has provided psychological support for countless journalists, many of them photographers. (Disclosure: I have undergone therapy with Dr. Feinstein and was one of the journalists profiled in the film.)

Many of the images are well known, as are some of the back stories, and yet the frankness with which photographers — four of them women — reveal struggles with post-traumatic stress, depression, and other personal hardships reflects a shift. The predominantly white, Western, and male-dominated industry has traditionally shied away from openly discussing mental health.

After documenting the aftermath of the Rwandan genocide, Sebastião Salgado felt a profound sense of sadness coupled with a conviction that mankind had lost its way. Yannis Behrakis, a Greek photographer for Reuters, survived an ambush in Sierra Leone that killed two of his colleagues, one of them his closest friend, Kurt Schork, before crawling three hours through the bush to safety. He later suffered bouts of depression so severe he could barely get out of bed in the morning. Peter Magubane, a black South African who documented inequality under Apartheid, was locked in solitary confinement for 586 days without being convicted of a crime. Another South African, João Silva, a photographer for The New York Times, spent years covering the violent end of apartheid and countless wars, losing friends along the way, until he lost both legs after stepping on an improvised explosive device in Afghanistan. Accompanying his profile are three frames he snapped in the aftermath of the blast, his legs shredded, one foot dangling.

Some blows don’t come from the battlefield or at the hands of brutal regimes, but from careless editors . After 25 years of covering conflict, during which she earned four Pulitzer Prizes, the Washington Post photographer Carol Guzy struggled with flashbacks of dead women and babies. What pushed her over the edge was not war, but the declining health of family members and the death of a friend, followed by a letter from her newspaper informing her, with no explanation, that her position had been terminated. Losing her job robbed Ms. Guzy of her identity, she said. She felt humiliated.

“At that time I was as broken as I had ever been,” she told Dr. Feinstein. “Everybody is around for the Pulitzer parties, but then you enter that darkness and find out who really loves you.”

Conflict journalists are quick to note that what they confront pales in comparison to what the victims of war or disaster endure, Dr. Feinstein writes. Still, Santiago Lyon, who was wounded in Bosnia, reveals that he has known at least a dozen colleagues killed at work. The loss of friends and colleagues, or the loss of a job — increasingly common in an industry beset by shrinking budgets — rank among life’s most stressful events, according to a study Dr. Feinstein cited.

Beyond broken bodies, there’s growing awareness of damage done to the soul. Those types of injury involve the transgression of an individual’s moral code — by perpetrating, witnessing, or failing to prevent horrible acts, causing a crisis of conscience or emotional shame.

The Australian photographer Ashley Gilbertson, for instance, is haunted by the death of an American Marine assigned to protect him in Iraq, while the French photographer Laurence Geai grapples with her inability have to stopped a mob execution in the Central African Republic.

So why do photographers risk being beaten, jailed, tortured, held for ransom, and even maimed or killed? And how do they cope? By Dr. Feinstein’s reckoning, they are both driven and bolstered by their convictions and principles. These act as a kind of emotional armor and a source of resilience.

Mr. Gilbertson sought out the family of the Marine who died protecting him and embarked on a redemptive journey photographing bedrooms of service members who never returned from war. Ms. Geai resolved to intervene on subsequent encounters with murderous mobs. Mr. Salgado returned to his family farm. Mr. Behrakis remained creatively engaged. Mr. Magubane had the weight of history on his side. And Mr. Silva focused on his physical recovery and on what he regained each day, not on what he has lost.

“It quickly dawned on me that what he had put in place was a most effective homegrown variant of cognitive behavioral therapy, in which negative ruminations are supplanted by a more forward-looking, problem-oriented way of thinking,” Dr. Feinstein wrote of Mr. Silva. “There was no time for self-pity. It was all just focus on the day to day, on being strong.”

Dr. Feinstein cites Nietzsche’s idea that to profit most from existence, we must live dangerously. War offers the electrifying jolt of living on the edge, the deep friendships forged under stress, the hard partying that often follows, as well as encounters with “the nobility of the human spirit that war paradoxically unmasks,” Dr. Feinstein writes, providing an antidote to the horror.

“These positives surely outweigh the negatives, providing an enduring allure to those with the right temperament,” Dr. Feinstein concludes.

And yet, war demands a debt that never goes unpaid. Ultimately, countless factors drive photographers into war’s vortex, but perhaps the simplest reason is best: There are photographs to take and stories to be told.

Finbarr O’Reilly is a photographer and the co-author with retired Sgt. Thomas James Brennan of “Shooting Ghosts: A U.S. Marine, a Combat Photographer, and Their Journey Back from War,” recently published in paperback by Penguin.