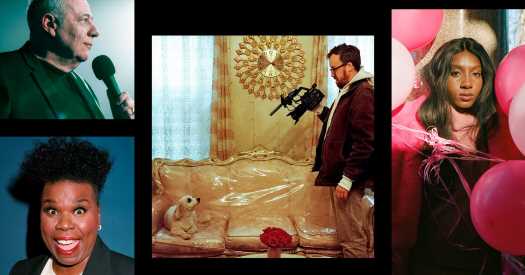 The comedy boom finally busted. Not only did the pandemic shut down comedy institutions, but New York clubs like Dangerfield’s, which was half a century old, and the stalwart The Creek & the Cave closed for good, as did the city’s branches of the improv powerhouse, the Upright Citizens Brigade. At the same time, comedians adjusted to the new abnormal, transitioning to Zoom and Instagram Live, and to shows in parks and on rooftops. It was a period of experimentation and stagnancy, contraction and accessibility, despair and occasional joy. In a low year, here were the highlights:

Do you find an angry blue-collar guy yelling about being high on molly funny? Does the phrase “Stalin on Spotify” amuse you? Do pivots from ragingly unhinged roars to an NPR voice make you lose your breath in laughter? No? Not to worry: Eddie Pepitone will still delight. An overlooked master of the form, he’s perfected a persona of the silly grump that makes anything funny. Smart comedy that aims for the gut, his new special (available on Amazon Prime) is titled “For the Masses,” but he jokes that is by necessity, in one of several insults of his audience: “I would be doing jokes about Dostoyevsky if it wasn’t for you.” 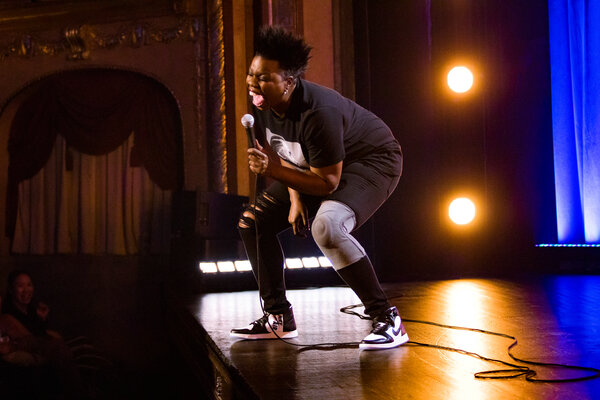 Leslie Jones made the most of her first year after “Saturday Night Live.” Not only did she go viral roasting the clothes, furniture and décor of cable news talking heads in social media videos, but she made a dynamite Netflix special, “Time Machine,” where she castigated today’s young people for failing to have fun. “Every 20-year-old’s night,” she preached, “should end with glitter and cocaine.”

About six weeks after the release of Jones’s special, the breakout young comic Taylor Tomlinson made an impressive Netflix debut with “Quarter-Life Crisis”; in it, she says she’s sick of people telling her to enjoy her 20s. “They’re not fun,” she said exasperated, in one of many cleverly crafted bits. “They’re 10 years of asking myself: Will I outgrow this or is this a problem?”

By describing her special in detail, beat by beat, at the start of Netflix’s “Douglas” — Hannah Gadsby’s follow-up to “Nanette” — she seemed to be eliminating the most important element of comedy: surprise. But like Penn & Teller deconstructing the secrets of magic while hiding some new ones, she just found a new way to fool you.

In his funniest and most stylish special, “Miami Nights,” on YouTube, Hannibal Buress ended on a 20-minute story about an unsettling encounter with a police officer in Miami that led to his arrest. It’s a master class in comic storytelling that sent himself up, skewered the police, hit bracingly topical notes with throwaway charm while adding on a coda that provided the visceral pleasures of payback. It’s stand-up with the spirit of a Tarantino movie.

One nice side effect of the shutdown for live comedy is that in transitioning to digital, local shows became accessible to everyone with an internet connection. So it was a nostalgic treat that the weekly Los Angeles showcase Hot Tub, which pioneered weird comedy in New York before moving to the West Coast, once again became part of my comedy diet, via Twitch. While there were many new faces, much hadn’t changed, like the eclectic and adventurous booking and the dynamite chemistry of its hosts Kristen Schaal and Kurt Braunohler.

Street comedy, a subgenre of some legend, was all but dead when the pandemic pushed stand-up outdoors. By the fall, several comics, like Chelsea Handler and Colin Quinn, even made specials there, working crowds whose laughter did not echo against walls. The sharpest was “Up on the Roof” by the workhorse comic Sam Morril (it’s his second punchline-dense special of the year), the rare person to translate New York club comedy to rooftops (with the help of cameras on drones).

When comedic dynamo Cole Escola produced his own special featuring deliriously bizarre characters wrapped in pitch-perfect genre spoofs, and released it on YouTube under the title “Help! I’m Stuck! With Cole Escola,” he was surely not trying to embarrass networks and streaming services for never placing him at the center of his own show. But that’s what he did.

The charismatic Ziwe Fumudoh has long been comfortable creating and sitting in the tension between the comedian and the audience in small alt rooms, but in her interview show on Instagram, she repurposed this gift for cringe and applied it to probing conversations on racism with guests like Caroline Calloway and Alison Roman. It made for essential viewing during a protest-filled summer.

“I Hate Suzie” provided serious competition, but the best British comic import this year was “Stath Lets Flats,” which found a home on HBO Max. This brilliantly observed office comedy focuses on the mundane travails of an awful real estate agent and his sister. Jamie Demetriou (who created the show) starred, along with his real-life sister Natasia, better known in the United States because of her dynamite deadpan in the FX vampire comedy “What We Do in the Shadows.” The show is cringe comedy whose beating heart comes from their relationship. Look out Sedaris siblings. A new talent family has arrived.

The stand-up comic Beth Stelling’s pinned tweet is from 2015: “I’ve been called a ‘female comic’ so many times, I’ll probably only be able to answer to ‘girl daddy’ when I have children.” This year, she released a knockout special on HBO Max titled “Girl Daddy.” It’s a virtuosic performance, conversational while dense with jokes — with a portrait of her father, an actor who works as a pirate at an Orlando mini-golf course, that manages to be scathing, loving and sort of over it, all at the same time.

It’s a good sign for adventurous work that last year’s winner (Natalie Palamides’s solo shocker “Nate”) is now a Netflix special. But the revelation this year was HBO’s “How To With John Wilson,” a kind of reality show about New York City that pushed formal boundaries while unearthing the hidden and the overlooked in poignant, funny new ways.

In one of her final projects, Lynn Shelton masterfully shot the latest Marc Maron special “End Times Fun,” on Netflix, demonstrating that great direction doesn’t need to be about showy camera movements. Her shot sequences emphasized and played against Maron’s jokes, working together effortlessly, like dancing partners that intimately know each other’s moves. Two months later, in May, she died of a blood disorder. Memorializing her movingly on his podcast, Maron, her boyfriend, said: “I was better in Lynn Shelton’s gaze.”