What does it mean that the most talked about comedy special of the year offered a biting critique of comedy itself? And that the most memorable talk show rant took aim at talk show rants? Maybe nothing — after all, comedy has long looked inward — but for an art form, tough criticism is one sign of health. Here are a few more.

When I asked the heads of comedy at Netflix about my theory that Hannah Gadsby’s “Nanette” is less popular than its massive media coverage made it seem, they declined to answer. Truth is: It doesn’t matter. The impact of this arresting performance cannot be accurately measured in clicks, subscriptions or even rave reviews. It’s the most important comedy of the year because it challenged the form, and in so doing, expanded the idea of its possibilities. The criticism often leveled at “Nanette” — it’s not stand-up, but a solo show — is an unintentional compliment. Solo shows have a venerable, and funny, tradition (see Lily Tomlin, Whoopi Goldberg, Spalding Gray), and the fact that comedy has co-opted the genre from the theater is a coup. 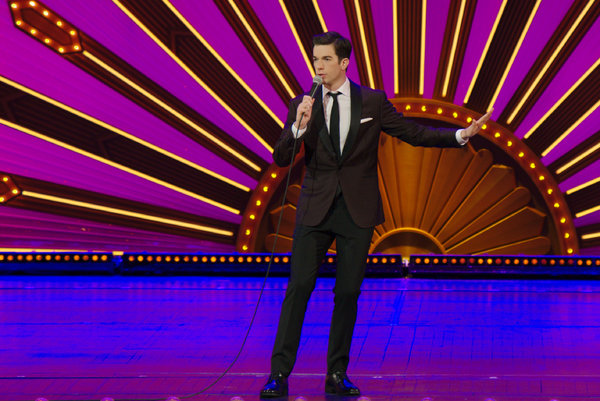 With “Kid Gorgeous,” John Mulaney made the leap from highly respected writer and comic to elite A-list stand-up. This slick production had range. Mulaney told a top-tier Trump joke comparing his presidency to a horse set loose in a hospital, shifted gears with a vividly nostalgic story about an elementary school safety assembly and also thundered a nice polemic against colleges asking alumni for money. But it also has enough oddball touches, including its David Lynchian introduction walking through Radio City Music Hall, to convince the audience that this clean-cut comedian is much more eccentric than you thought.

This was the year when ambitious direction of comedy specials became the norm, with artists trying conceptual flourishes like taking away the audience, as Jerrod Carmichael did on Drew Michael’s experimental hour, or adding an inner-voice narration to punctuate punch lines with meta-jokes, like Jay Karas did in Demetri Martin’s unfortunately overlooked “The Overthinker.” But Steven Brill’s excellent direction of Adam Sandler’s “100% Fresh” was not flashy. What distinguished it is how effortless he made the complex editing together of a multitude of shows appear. Not only did he create a cohesive stand-up set out of appearances in both vast and intimate spaces, along with a few oddball clips of Sandler mugging outside theaters, but he also made sure this special had the emotional arc of a well-made romantic comedy.

When the superbly curated weekly Brooklyn stand-up show “Butter Boy” started in late 2017, Maeve Higgins was the one of the three hosts (Jo Firestone and Aparna Nancherla are the others) with the least stand-up experience. But she has emerged as a natural master of ceremonies, quick with banter, charming and biting, and if a comic indulges in hack stereotypes, there’s a chance she might call it out.

It was a big year for Michelle Wolf. In April, the dependably funny stand-up comic broke into the national consciousness with a scathing set at the White House Correspondents’ Association dinner, which since they didn’t invite a comic this year, was so cutting that it may have ended a venerable tradition that was probably better off gone. But then things took an unfortunate turn when her new Netflix talk show “The Break” was abruptly canceled before it had time to find its footing.

It still had enough time for a marvelous spoof of political rants behind desks that articulated a criticism of contemporary talk shows better than anything else. “Writing jokes is hard,” she said, commenting on talk show polemics. “You know what’s easier? An earnest plea.”

Hasan Minhaj’s “Patriot Act” seemed like the last thing the culture needed: Yet another sober talk show centering on highly researched progressive monologues punctuated with quips. Yawn. And yet it’s somehow proved to be addictive viewing because of its charismatic and energetically curious host, some solid jokes and smartly chosen topics (What other talk show host would do 20 minutes on the street wear giant Supreme?) that are somewhere between topical and evergreen.

The prolific British comic James Acaster put four specials out on Netflix this year but nothing in them is as riotous as the story he told in his new stage show at SoHo Playhouse about his girlfriend leaving him for Rowan Atkinson. Being replaced by Mr. Bean is apparently brutal. Keep an eye out for a special with this sad tale next year.

Most Unexpected Comeback by a Superstar

If you’re looking for funny spoofs of pop culture mega-celebrities, forget “Saturday Night Live” and try the Instagram page of the comic Kyle Dunnigan, who has been putting on a crowd-pleasing one-man digital sketch show. Using an app called Face Swap, where he subs in his lips to photos of stars, he creates conversations with, among others, the president, Kim Kardashian and Louis C.K. His impersonation of Bill Maher is especially uncanny. A stand-up and writer for shows like “Inside Amy Schumer,” he has long been more respected than famous, but these quick character sketches have represented something of a breakthrough, moving him from 15,000 followers in January to 419,000 by the end of 2018.

Surprising everyone with a collection of new loony characters on his Showtime show “Who Is America?,” Sacha Baron Cohen tricked Dick Cheney into autographing a “waterboard kit,” coaxed a series of Republican lawmakers into filming a political ad advocating giving guns to kids and somehow convinced a Georgia politician that to protect himself from terrorists he needed to drop his pants and chase Cohen across the room, rear-forward. And yet these remarkable political pranks that exposed the raw, uninhibited ugliness of our politics better than any joke this year did not pierce the public consciousness and create indelible characters the way that Borat or Ali G did. Perhaps Cohen set too high a standard. Maybe the humiliations here turned too many people off. But make no mistake: Cohen made the most thrillingly unpredictable comedy of the year.