LONDON — This time it was the bidding that made people gasp.

Banksy, the world’s most famous street artist, joined the ranks of the world’s most expensive artists Thursday night when his 2009 satirical painting, “Devolved Parliament,” showing Britain’s House of Commons populated by chimpanzees, sold for 9.9 million pounds with fees, or about $12.1 million, at Sotheby’s, setting an auction high for his work.

“This is like the moment Basquiat made it into the Soho galleries in the 1980s,” Alex Branczik, Sotheby’s head of contemporary art in Europe, said after the sale. “I’ve realized he’s a serious artist, but he has such a broad popular base. He appeals to established and new collectors,” added Mr. Branczik.

“Devolved Parliament,” a Victorian-style oil on canvas showing the debating chamber of the House of Commons packed with earnest-looking chimps, was being offered at the evening auction of contemporary art just four weeks before a Brexit-traumatized Britain is due to leave the European Union. Signed and dated 2009, the painting, offered by a private collector, had been estimated to sell for between £1.5 million and £2 million, or $1.9 million to $2.5 million.

Acoris Andipa, a London dealer who specializes in Banksy, called the 14-foot-wide “Devolved Parliament” “an important piece,” saying it was the most valuable work executed solely by Banksy to have so far appeared at auction. (Other pieces have sold privately for at least $3 million.) “It’s just so topical. And the sale was perfectly timed for Frieze,” Mr. Andipa added, referring to the contemporary art fair currently running in Regent’s Park that always draws international collectors.

But for some in Sotheby’s packed salesroom, the result was an anticlimax. They had been hoping to witness a stunt as spectacular as the Banksy “shredding incident” that transfixed the world’s news and social media last October at Sotheby’s.

On this occasion, Banksy had already done his monkey business.

After a dramatic 13 minutes of competition, in which as many as 10 bidders were involved, at least five of them in the room, it was finally knocked down to a telephone buyer. At one point the hammer was poised to fall at £6.4 million, but a bidder at the back of the room flung up his hand at the last second, before before finally giving way to the winning telephone bid.

“It’s a really important moment,” said Mike Snelle, half of the London-based artist duo, the Connor Brothers, who was in the salesroom. “The price was final recognition of how important an artist he is. The art world has taken time to catch up with how significant he is culturally.”

The artist’s previous auction high was set in 2008 for the painting, “Keep It Spotless,” a collaborative work by Banksy and Damien Hirst, which sold for $1.9 million at a Sotheby’s charity auction.

When Sotheby’s announced last month that it would be selling the Banksy, the auction house catalog said the painting had been included in the Bristol Museum & Art Gallery’s hugely popular 2009 show devoted to the artist, who was born in Bristol. It was then titled “Question Time.” Sotheby’s said the painting, retitled “Devolved Parliament,” returned on loan to the Bristol Museum in March to coincide with Britain’s then-scheduled exit from the European Union.

But sharp-eyed Banksy enthusiasts notified The New York Times about significant differences between the image seen in Bristol in 2009 and that exhibited in 2019. Most crucially — and perhaps symbolically — the overhead lamps in the House of Commons had been turned off in the later version, and a banana held by a chimp in the foreground was turned downward, rather than up.

Sotheby’s subsequently amended the cataloging to say the painting had been “reworked” by the artist after the 2009 exhibition.

This new auction high for a Banksy painting follows on from the remarkable £395,250, or about $518,000 given last month for a rare proof of the iconic 2004 “Girl With Balloon” screen print at a Christie’s online sale of Banksy’s work.

Printed with the balloon in gold rather than the usual red, it was thought to be one of just 22 produced. The result was an auction high for any Banksy print, according to Artnet.

To put the current peaks of the Banksy market in perspective, the price of that “Girl With Balloon” was just a fraction lower than the auction high of $530,500 achieved six years ago for Albrecht Dürer’s 1514 engraving, “Melencolia I,” one of the most acclaimed masterpieces of European Renaissance art.

“Everyone wants a piece of it,” said James Baskerville, head of Christie’s Banksy sale. “His market ebbs and flows, but if he continues to create works and do stunts, the market will continue to rise.” 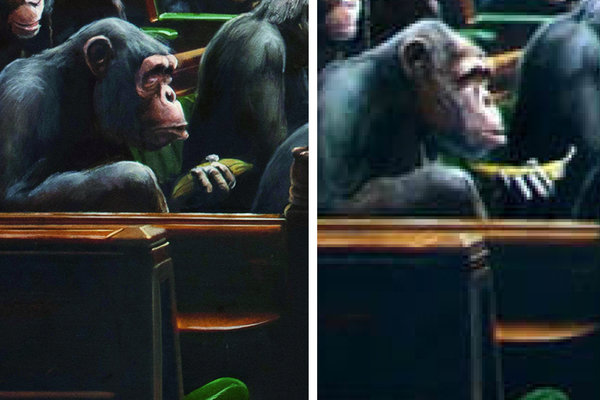 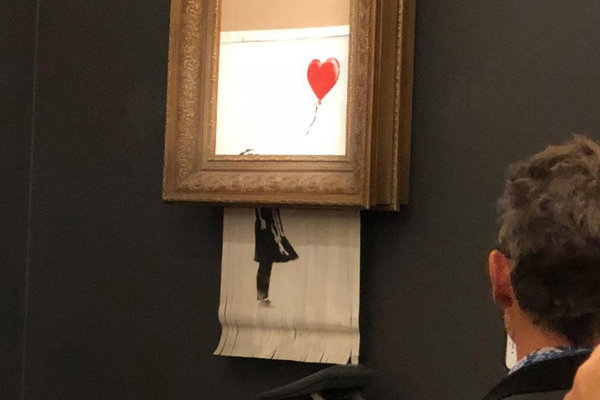