Throughout the 2022 series of The Great British Bake Off, Sandro Farmhouse was consistently a strong contender for the winner’s title, earning the Star Baker recognition once and making it all the way to the final.

In addition to impressing judges Paul Hollywood and Dame Prue Leith with everything from his mini sandwich cakes to his crumble puddings, he also gained a dedicated fanbase of viewers fawning over him in the kitchen, as well as over his adorable personality.

Having shared his baking talents with the world, Sandro was enlisted by Google to create an incredible cake paying homage to the Year In Search, honouring trending topics of the past 12 months that people have been searching for online, including the latest season of Stranger Things, the late Olivia Newton-John and the Queen’s Platinum Jubilee.

While speaking to Metro.co.uk about his stunning culinary creation, he also shared some of his fondest memories from his time on Bake Off, admitting he steers clear of fans on Twitter because the messages they share about him can veer towards being ‘18+’… if you know what he means.

‘I stay away from Twitter fans, because Twitter fans get a bit 18+. There’s definitely a difference between the Twitter fans and Instagram,’ the 30-year-old told us while standing next to his showstopper-worthy five-tier cake at the Google offices in London.

‘The Instagram fans are more child-friendly and it’s nice. People I guess… I guess I’m a pretty person?’ he added, laughing humbly. 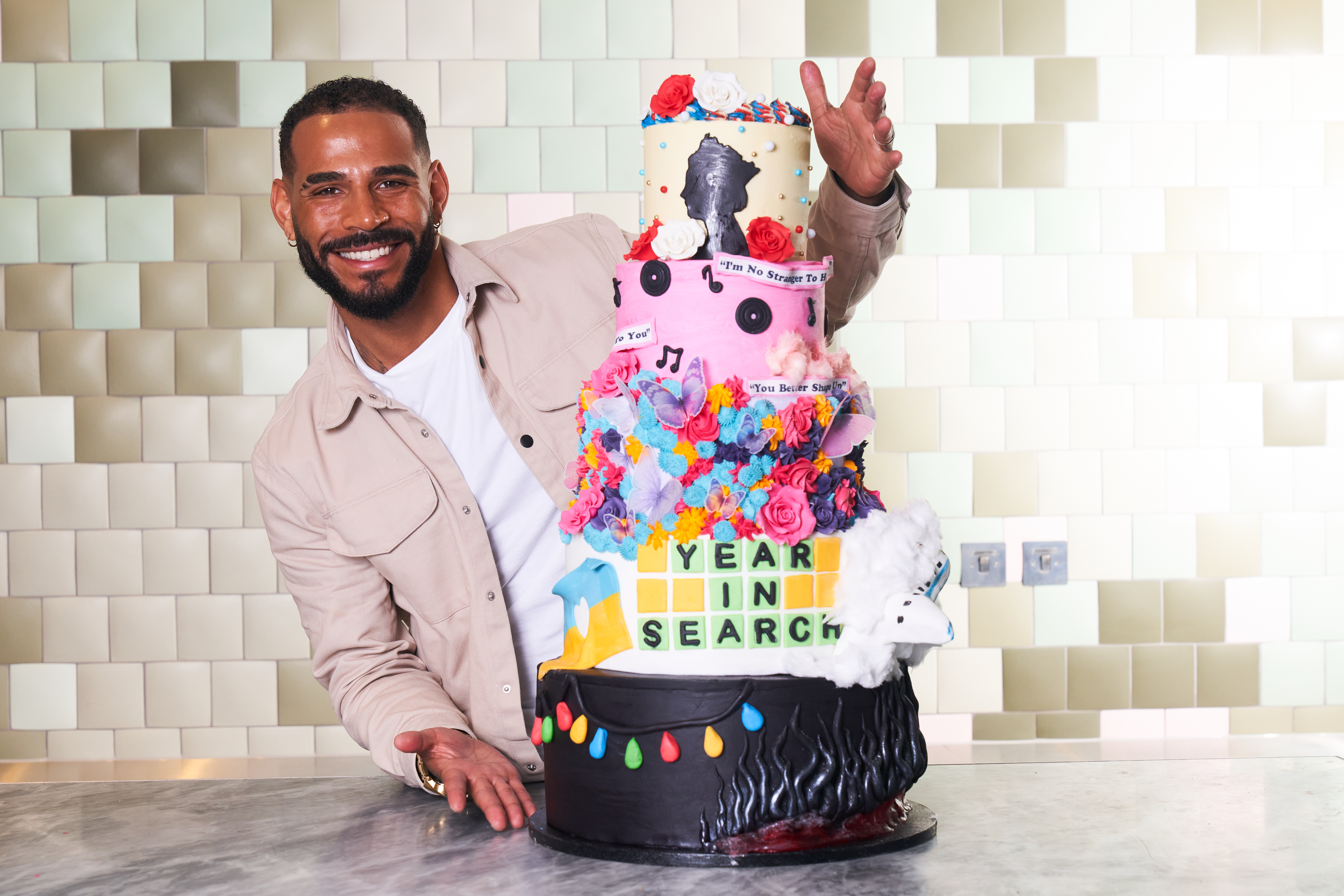 ‘People really were complimenting what I look like, which is nice to know that people think you’re pretty looking, so that’s nice. And to know that they also think that your personality is great too.

‘It’s sort of a win-win. I’m glad that the whole personality came through, because you don’t always want to be judged on what you look like. So I’m happy that there’s more to it. I have substance guys!’

Sandro admitted that he was ‘scared’ of how people would ‘take’ him before the latest series of Bake Off came out on Channel 4, considering filming wrapped up in June and he had to spend several months keeping his involvement a secret before the season launched.

What were the top-searching trends of the year on Google?

Plus, here are some more breakdowns…

‘Because I’m an optimistic and very positive person, sometimes it can come across as maybe very confident. I just love life, and I just take each day as it comes,’ he remarked.

‘I’m really surprised at how many people took to me and how many messages I get – a lot of people saying, “I enjoyed watching you and how positive you are”, so it’s so nice that people were able to see the real me through the TV screens.’

Speaking of the ‘amazing’ fans that he encounters on a day-to-day basis, with some even asking for him to FaceTime members of their family who watch the programme, Sandro also revealed that he’s had some high-profile celebrities sliding into his DMs.

‘The British fans are amazing, but the American fans are also equally amazing. They’ve been so supportive towards me. I’ve had fans from like Hollywood stars, A-list stars that I watch myself, that I’m a fan of, messaging me saying they’re a fan of me,’ he shared, still astonished at the way his life has changed.

Sandro’s Year In Search cake for Google is spectacular to say the least, with the bottom of it depicting the rift leading to the Upside Down on Stranger Things, followed by a heartfelt nod to Ukraine above with a heart-shaped fondant flag, as well a reminder of the havoc Storm Eunice caused earlier in the year.

The title ‘Year In Search’ is written – of course – in the style of Wordle, the word game that took the world by storm before being bought by The New York Times for a price reportedly reaching seven figures.

The middle of the cake shines a spotlight on the beautifully vibrant colours of Pixar fan-favourite Encanto, which boasted the first ever Disney song to reach the number one spot on the UK Official Chart – We Don’t Talk About Bruno – earlier this year.

A tribute to late Grease star Olivia appears above, with references to some of her most famous song lyrics after her death in August aged 73, followed by the celebration of the Queen’s Platinum Jubilee, which took place prior to the late monarch’s death in September at the age of 96.

Sandro outlined how it had always been a wish of his to make a cake for the Queen, so while he wasn’t able to do so while she was alive, he felt privileged to be able to honour her with his Year In Search cake.

‘This means a lot more to me as well because I’ve always wanted to do something tributed to the Queen, so I’m glad Google’s given me that opportunity,’ he said.

The Great British Bake Off is available to watch on All 4.