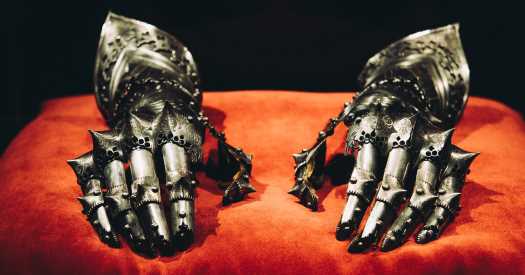 “War is a force that gives us meaning,” wrote the veteran foreign correspondent Chris Hedges — an adage he delivered with vicious irony. War can pick up the dull, lousy clay of your little human life, and refashion you into a hero or martyr. War muffles brute inequities of power and capital, and entrances you with blandishments of honor. War is a storyteller, with a tale so grand and corrupt that even death becomes beautiful.

Five hundred years ago, at a moment of political rebellion and economic anxiety, a leader arose who understood the public allure of the martial imagination, and how war could turn a noble into something like a superman. He was Emperor Maximilian I of the Holy Roman Empire, and out of an iffy inheritance in Austria he emerged as one of the most powerful leaders in Renaissance Europe, presiding over territories from the modern-day Netherlands all the way to Croatia. He had some successes on the battlefield, yet it was not principally his military prowess that made his name. It was images of the warrior emperor, and public spectacles of chivalric glory, that made Maximilian a legend.

“The Last Knight: The Art, Armor, and Ambition of Maximilian I,” an exhibition of grand scale and heavy metal at the Metropolitan Museum of Art, plots the relentless rise of this most elegant of Hapsburg propagandists. It’s the largest exhibition of arms and armor the Met has presented in decades, and has been organized by Pierre Terjanian, who leads the museum’s department. Though it’s armed to the teeth with flashy military gear — meant for both function and fashion, and for both men and horses — you’ll also find paintings, illustrated books and celebratory images made with the hottest new technology of the late 15th century: printmaking.

It’s a difficult show in some ways, and historical details may escape you unless you make a careful study of its timelines and wall texts. But “The Last Knight,” all told, is not so much about the biography of Maximilian as about the workings of power, and the uses of art, printing and performances to accrue political might.

The exhibition includes loans from nearly three dozen museums and libraries, including the stunning suit of armor in the first gallery here, a 20-piece knockout of ribbed and fluted steel that has traveled from the Kunsthistorisches Museum in Vienna. The waistline is tapered severely, and the gauntlets are trimmed with copper studs and piping. Check out the aggressively stylish boots, with foot-long spikes so pointy even Michael Jackson would have found them unwearable.

Maximilian would have appeared resplendent when he wore this field armor at the age of 20. He needed to. Two years previously, in 1477, he married Mary of Burgundy, who upon the death of her father became the sole heir to territories in modern France, Belgium and the Netherlands. Burgundy had a court of great sophistication, but it was nearly bankrupt, and with a woman on the throne it faced incursions from pretenders outside. Maximilian, who didn’t speak French or Flemish, who couldn’t even afford the initial travel expenses to Burgundy, liked Mary’s lavish life and was ready to fight for it. And to convince his fellow nobles and subjects of his legitimacy to rule, this nonnative Burgundian had to put on a show.

In battle, where other kings stood back, Maximilian raced in on foot, and showcased his fearlessness by challenging all comers to duels. Back in town, he staged sumptuous multiday tournaments, jousting with local noblemen and foreign champions in ritualized, but still dangerous, mock combat. The most engrossing galleries of “The Last Knight” look at these grand tournaments, which were nothing less than performance art five centuries before the genre got its name.

Participants in the jousts wore specialized armor, some resembling wartime outfits and others meant only for peaceful bouts, and fought with pronged lances to unhorse their opponents or to split their own weapon (which meant you’d landed a solid blow). These jousting armors could be decidedly high-tech, by 15th-century standards. Three steel and copper breastplates here feature notches that held a shield, as well as mechanical springs that launched the shield skyward, with the humiliating finality of a game show buzzer, if an opponent struck with enough force. Mr. Terjanian speculates that Maximilian might have invented this style of combat, since it took place only at his court.

Still, for all the niftiness of these gladiatorial outfits, the most beautiful works in “The Last Knight” are a sequence of small gouaches and drawings depicting jousters, which Maximilian commissioned to illustrate a lightly fictionalized epic of his own martial exploits.

In these works on paper, an imperial alter ego called “Freydal” aims to win the hand of a princess by jousting with the very opponents Maximilian had defeated. Freydal and his competitors wear wild headgear tricked out with feathers or antlers, while their horses are draped with ritzy striped silks; the wooden lances splinter in the air like shrapnel. After a long day in the tiltyard, the jousters head to a dance party wearing women’s dresses. Maximilian liked a good masquerade.

He was hardly the richest client of the armories of Brussels, Nuremberg and Milan, and several letters and receipts in this show affirm that Maximilian struggled to pay the bills for his gauntlets and greaves. Sometimes, though, you have to spend money to make money — and as several letters here from the emperor attest, armor had profounder uses than mere protection. Armor served to craft an image of courage, virtue and panache, which would make your subjects love you and your opponents think twice about invading. It also could function as an instrument of diplomacy. The engraved, heavy-duty bard (or equine armor) that opens “The Last Knight” was a gift to the young Henry VIII, a fellow prince who loved jousting almost as much as Maximilian did.

“He who makes no memory of himself during his lifetime will have none after his death, and will be forgotten with the tolling of the final knell,” Maximilian intoned in another lightly fictionalized narrative. The emperor saw to his own immortalization by commissioning literary works and also prints — above all the giant “Arch of Honor.” This demented act of self-glorification, more than 11 feet tall and spanning 36 sheets of paper, praises his ancestors, war victories and diplomatic alliances. (It took 195 woodblocks to print; Albrecht Dürer and Albrecht Altdorfer were among the many artists who undertook the work.)

Maximilian preens at the top, looking very young for his now advanced years, while beneath him lie acres of battle scenes, showcases of strength and poetic invocations of imperial grandeur. As a work of printmaking, the “Arch of Honor” is a landmark. As a work of political propaganda, even a North Korean dictator might have found it over the top.

Maximilian died in 1519, reduced in a death portrait here to a simple old man in bed — and, with an eye on Christian immortality, the penitent Kaiser left orders for attendants to whip his corpse, shave his head and take a club to knock out all his teeth. But he could not foresee how quickly his knightly exploits would seem antique. A new world had been discovered across the Atlantic, and in Saxony a professor named Martin Luther had nailed some thoughts on religion to a church door. Merchants from Lisbon to Venice were making fortunes, and chivalry became a hangup from an earlier age.

Early modern Europe was dawning. Wars of religion were about to begin, and it was a bit late for jousting. Who would become the most famous knight-errant of the century after Maximilian’s? A fool from La Mancha, tilting at windmills.

The Last Knight: The Art, Armor, and Ambition of Maximilian I

Jason Farago is an art critic for The Times. He reviews exhibitions in New York and abroad, with a focus on global approaches to art history. Previously he edited Even, an art magazine he co-founded. In 2017 he was awarded the inaugural Rabkin Prize for art criticism. @jsf