Disaster struck less than a month before the Armory Show opened this week. Inspectors for the city declared Pier 92 structurally unfit for mounting an art fair. With some quick maneuvering, nearby Pier 90 was secured, and its inhabitants scheduled for the Volta art fair were scattered throughout the city. Brochures and maps for the 25th edition of the Armory Show were reprinted, with shuttle buses available to visitors who can’t or don’t want to walk the extra 100 yards from Pier 94 to Pier 90.

Inside the fair is a healthy mix of new and 20th-century historical art, solo presentations and specially curated critical sections with names like Platform and Focus. This fair hews to what has become a tried and true formula among the largest art expositions, offering a diverse array of artists, including many women; panels on protest art, the biennial phenomenon, collecting and investing. It argues for the relevance of fairs beyond their value as international trade bazaars.

There are many highlights among the 198 galleries. Consider these galleries as places to start. 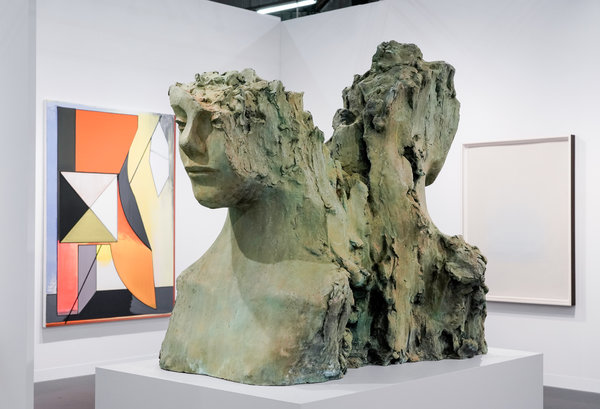 Along with a handful of other galleries clustered near the entrance to the fair on Pier 94, Tanya Bonakdar was in the first version of the Armory Show 25 years ago. Called The Gramercy International Art Fair because it took place in the Gramercy Park Hotel, it had some works famously displayed on beds in the hotel rooms. That wouldn’t work for the current installation at Bonakdar, which includes a giant pair of patinated bronze busts by Mark Manders, appropriately titled “Two Immovable Heads” (2015-2016). The display, with its enigmatically attached and fragmented profiles, complements an outdoor exhibition by Mr. Manders of a giant tilting head, created for the Public Art Fund, which materialized outside Central Park this week.

There is an identifiable strain of African art circulating in galleries and museums around the world right now in which artists create tapestry-like sculptures and wall hangings from found materials — usually in plastic and metal. The best-known artist working this vein is El Anatsui, but the Zimbabwe-born artist Moffat Takadiwa offers some terrific versions on the theme at the Los Angeles gallery Nicodim. Pads from computer keyboards, toothbrushes, bottle caps and other detritus are woven together to create sculptures that drape and cascade and bulge from the walls. From a distance the sculptures look like textiles but up close, the plastics and metals that populate the world’s garbage dumps (and worse, oceans) become components for curiously ingenious art works.

The Berlin gallerist Tanja Wagner uses a modest corner in the Presents section of the fair, devoted to younger or emerging galleries, to great advantage, showing the paintings and light sculptures of the Dresden-born Grit Richter. Ms. Richter’s paintings forge conversations between abstraction and representation, art and design, past and future. With their curving forms (often called “figures,” although there’s nary a person in view) and black and electric colors, her works look like a blast from the 1960s. And yet, her art points to a nebulous technological future in which blobs and biomorphic forms merge with human bodies and telecommunications.

Also appearing in the Presents section, the Los Angeles gallerist Shulamit Nazarian has brought the witchy, psychedelic paintings of Naudline Pierre and suspended sculptures of Fay Ray. Ms. Pierre, who lives in Brooklyn, draws from religious-art sources, as well as mythology and spiritualism to make paintings in which the human bodies are blue or purple or multihued and conversions or epiphanies are taking place. Ms. Ray’s sculptures, made from aluminum, chain and volcanic rocks, among other materials, dangle from above. (It’s hard to say in a space like the Armory just where things are attached.) Like Ms. Pierre’s paintings, they are meant to connect the material and spiritual worlds — a particularly high ambition at an art fair.

You cannot miss the bright green booth of Mariane Ibrahim, a Seattle — and soon to be Chicago — art dealer who is showcasing the work of the Haitian-American artist Florine Demosthene. Ms. Demosthene’s flat figurative works are mysterious in their construction, which is part of their allure. Painted, stained, printed or drawn, the people and situations she suggests, are not unlike those of Wangechi Mutu or Tschabalala Self. Like those artists, the shape-shifting nature of portraiture becomes a metaphor for changing or erroneous representations of people, and particularly women, from the African diaspora.

Textiles and fiber works remain popular as artists explore traditions that have been overlooked or undervalued, compared with painting and sculpture, in Western art. At the booth of the London gallery Ronchini, the American artist Samantha Bittman has created digitally printed wallpaper and hung her weavings upon that surface to create a layered and seamless-looking installation. Because weaving and digital computing are connected — not just in their gridded appearance, but in the actual punch cards invented for both technologies — there is a conceptual, visual and historical conversation going on here.

The Seoul gallery Hyundai focuses on Korean modern masters and they have brought video sculptures from the 1990s by Nam June Paik, the best-known artist in this category. Paik was a pioneer of video art and his works made with screens and found objects are mounted here on lemon yellow walls. Silly and banal objects, from a kitsch sculpture of Mozart to an old television console, create profound and provocative connections with art, technology and everyday experience.

Down on Pier 90, the New York gallerist Laurence Miller has brought a low-key but riveting group of collages and relief sculptures by Gary Brotmeyer. Mr. Brotmeyer’s works have the glued-together, somewhat humble appearance of folk art, but their references to art and literary figures like Kasimir Malevich and Jorge Luis Borges reveal a more sophisticated creator at work. Mr. Brotmeyer, however, isn’t afraid of attaching a giant nose or animal ears to a photograph or otherwise “defacing” his subjects to highlight their (and our) slightly absurd humanity.

The black walls in the booth of the London dealer Archeus/Post-Modern distinguish it from its neighbors, as does its ambitious presentation of kinetic, light and Op Art sculptures from the 20th century. Here you’ll find moving fluorescent Ping-Pong balls in a 1969 sculpture by Martha Boto; neon works by Keith Sonnier and Francois Morellet; kinetic sculptures by Julio Le Parc, the ZERO group co-founders Heinz Mack and Otto Piene, with Mr. Piene represented by a wonderful 1967 installation with a perforated drum creating dancing light on the wall; and a characteristically solemn hologram by James Turrell.

Stacked ceramics by Eric Croes in the Focus section of the fair — which has a large number of African artists — suggest the totems and towering sculptures of art from various regions on that continent. Mr. Croes is actually Belgian, not from Africa, but cross-cultural borrowing and cryptic allusions are central to his work. Ceramic versions of masks and vessels create tall tendril towers, a candle holder or painted bronzes that mimic clay. Despite the sea of booths at the Armory, they beckon you to come closer and look more carefully. 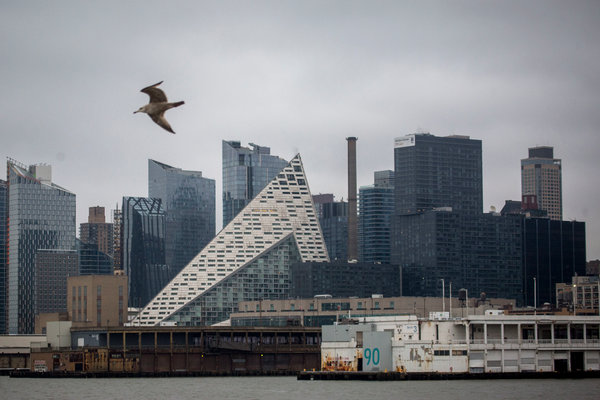 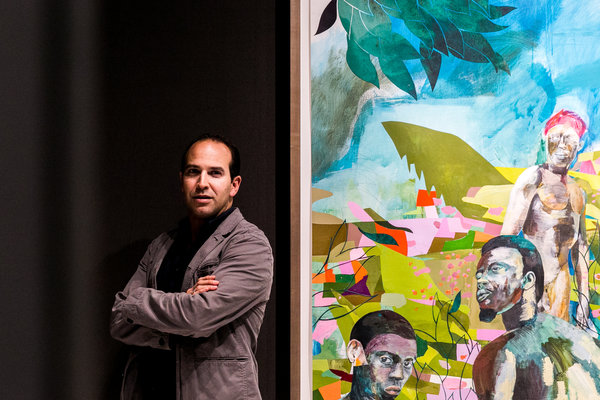