In February 1637, at the height of the speculative frenzy in the Netherlands we now know as “tulip mania,” a single bulb of the prized Viceroy tulip sold for 6,700 guilders, enough to buy a grand house in one of Amsterdam’s most desirable districts.

The market for tulips collapsed later that month, with prices of more common bulbs falling by as much as 95 percent. Since then, tulip mania has become a byword for the irrationality of financial bubbles.

So what about NFT mania?

Last week, Nifty Gateway, a specialist online marketplace for nonfungible tokens, or NFTs, held an auction that included a computer-generated illustration by the digital artist Mike Winkelmann, known as Beeple, whose JPG collage “Everydays — The First 5000 Days,” was sold online by Christie’s earlier this month for a sensational $69.3 million. 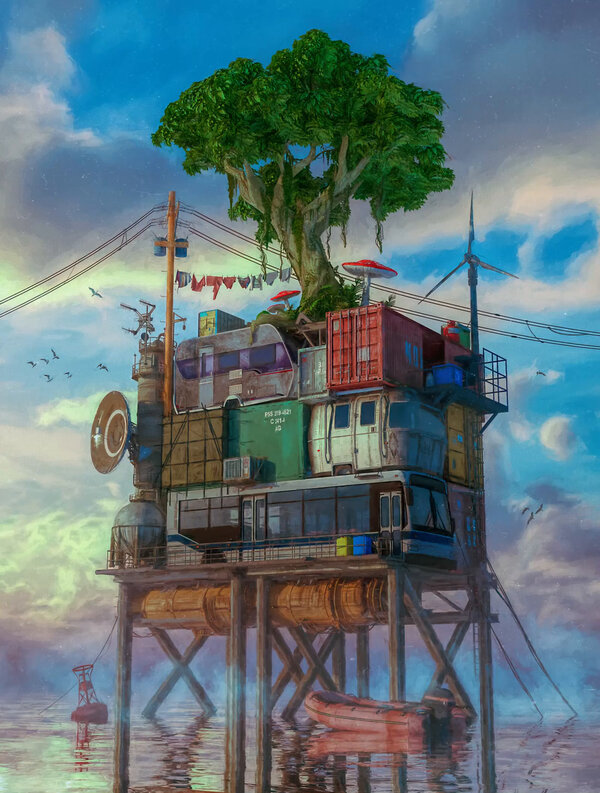 The work on Nifty Gateway, “Ocean Front,” showed a ramshackle condo development of old trailers, buses and containers rising from the sea on wooden stilts, and sold for $6 million. That could have bought a three-bedroom, three-bathroom apartment overlooking Central Park in New York.

“We’re in a frenzy of speculation. I don’t know how long these prices will be sustainable,” said Robert Norton, the chief executive and co-founder of Verisart, a company that certifies artworks on the blockchain. “We’re living in a moment of collective hysteria.”

Over the last few months, NFTs have been selling for jaw-dropping prices almost routinely on specialist sites that accept payments in cryptocurrencies. In February, an NBA Top Shot video clip of a LeBron James dunk sold for $208,000, paid for in FLOW tokens. Last week, Jack Dorsey, the chief executive of Twitter, sold his first tweet, newly “minted” as an NFT, for 1,630.6 Ether, the digital currency of the Ethereum blockchain-based platform. That price was equivalent to $2.9 million.

Most jaw-dropping of all, of course, was the $69.3 million given at the end of Christie’s two-week, one-lot auction of the Beeple JPG. A digital mosaic of all the satirical illustrations the South Carolina-based artist has posted online each day since 2007, “Everydays” was the first purely digital NFT Christie’s had sold.

In another first, Christie’s accepted payment in Ethereum, the cryptocurrency most commonly used to trade digital collectibles. The price of Ethereum has more than doubled since Jan. 1, bloating the virtual wallets of investors, some of whom are splashing their Ether on NFT art.

“Everydays” was bought by the Singapore-based crypto entrepreneur Vignesh Sundaresan, also known as MetaKovan, whose 42,329.453 Ether payment covered both the hammer price of $60.2 million, and $9.1 million in fees, according to Rebecca Riegelhaupt, a Christie’s spokeswoman.

Sundaresan is the founder of Metapurse, a cryptocurrency fund that in January launched a “public art project” called B.20; according to its website, B.20 seeks to redefine “the experience and ownership of art.” At the center of the project is a “bundle” of virtual assets, anchored by a collection of 20 Beetle NFTs bought for about $2.2 million in December.

The ownership of the B.20 collection, but not the assets themselves, has been split up into 10 million tradeable virtual tokens. The Beeple images are displayed in virtual museums within cryptovoxels.com, which describes itself as a virtual world powered by the Ethereum blockchain. Visitors to these open-access virtual museums can become stakeholders in the collection by purchasing B.20 tokens from virtual vending machines inside.

One work you won’t see on display, though, is “Everydays.” Sundaresan and his business associate Anand Venkateswaran, a.k.a. Twobadour, said in an email that their Christie’s acquisition was “not part of the B.20 collection.” They added that there were no plans to monetize the 5,000-image collage “yet.”

With the prices of individual NFTs soaring, the B.20 fund is just one of a number of NFT fractional ownership ventures, in which tradable tokens at affordable price points, pegged to the value of desirable digital assets, are divided among a group of buyers.

“I find the move toward fractionalization disturbing,” said Michael Moses, the founder of Mei-Moses, a database of auction sales, now owned by Sotheby’s. Its main index shows that, during the past 10 years, the overall value of the many thousands of artworks resold at auction has not increased.

“How do you value what’s being fractionalized? Value is something incorporated over time, not added in an instant,” said Moses in an interview. Cutting up expensive digital items into tradable tokens made the market “fraught with volatility,” he added. “Basically it’s gambling. You have no idea of the true value of the work.”

According to a Jan. 19 blog post by Twobadour, 50 percent of the B.20 fund’s 10 million tokens have been retained by Sundaresan, and 2 percent of them are owned by Beeple himself. A further 25 percent were released in a public offering in January, priced at $0.36 each. The first 16 percent of the public offering was “instantly” bought by bots, said Twobadour, referring to the high-speed automated trading mechanisms used by speculators.

On Tuesday, the tokens were trading at $6.33. On March 10, the day before Beeple’s “Everydays” sold at Christie’s, they had reached a high of $28.43, according to coinmarketcap.com. The B.20 website says that “There is an infinite upside to art.” But the fund’s token holders, like those who speculated on tulip bulbs, are discovering that the value of these investments can go down, as well as up.

According to the economist Peter M. Garber, the author of “Famous First Bubbles: the Fundamentals of Early Manias,” the Dutch market for tulips — or rather, futures agreements for their unseen, buried bulbs — became “just a gambling market” in 1637, particularly for the lower-priced bulbs, traded by weight in taverns, whose promissory prices increased 20-fold in the space of a month.

“People were coming in with no wealth and no credit,” said Garber. “The deals became unhinged. It was unsustainable.”

In an article published last week, Beeple told The New Yorker that he had cashed in the crypto winnings from his Christie’s sale for 53 million old-fashioned dollars. The day after the record-breaking auction, he said in an interview on Coindesk TV, an online media outlet for blockchain and cryptocurrency news: “I think it’s a bubble,” adding, “If it’s not a bubble now, I do believe it probably will be a bubble at some point, because there’s just so many people rushing into this space.” (Winkelmann did not reply to requests for comment for this article.)

A token based on a New York Times column about NFTs by Kevin Roose sold in an online auction last week for 350 Ether, more than $500,000. All proceeds from the auction will be donated to the Neediest Cases Fund, a Times-affiliated charity.

Damien Hirst, who, according to The New Yorker, sent Winkelmann a congratulatory message after the Christie’s auction, is among the artists joining the rush. On Tuesday, Hirst said in a news release that he would be offering a collection of 10,000 NFTs, called “The Currency Project,” with each token tied to an associated original work on paper.

A single artist’s project involving the minting of 10,000 NFTs might appear to be out of step with the growing outcry over the energy used by Ethereum’s proof-of-work algorithm, which requires a large number of computer servers.

In December, the London-based digital artist and computer scientist Memo Akten calculated that the minting and sale of the average NFT produced about 211 kilograms of carbon dioxide. On the basis of these calculations, Hirst’s latest project would consume energy equivalent to the electricity usage of an average American household over 412 years. (Hirst and Palm, a crypto start-up partnering with him for the project, said in a news release that their implementation would be “up to 99 percent more energy efficient” than previous Ethereum-based NFT sales.)

Environmental concerns could, possibly, be one factor that might cool enthusiasm for NFTs. Another could be a drop in the value of Bitcoin and Ethereum, to which NFT prices are pegged.

Back in early 2018, the nascent market for crypto art was choked when the prices of virtual currencies collapsed. But in recent months, the value of Bitcoin has been bolstered by investments from the electric car company Tesla, hedge funds and other influential players, giving investors hope that cryptocurrencies might shed their reputation for volatility.

Kenneth S. Rogoff, a professor of public policy and economics at Harvard and author of the 2016 book “The Curse of Cash,” said that investment from “heavy hitters” such as Tesla may have reinforced the idea that cryptocurrency like Bitcoin would evade governmental regulation.

“The core problem with cryptocurrencies is that people are able to make large-scale transactions that cannot be easily traced by the government. It helps facilitate tax evasion, money laundering, crime and terrorism, and governments can’t quietly allow that,” said Rogoff in an interview. “But central banks and regulators have been moving slowly. Bitcoin and other cryptocurrencies can have a long run.”

It should also be pointed out that febrile speculation in assets that have no physical existence has flourished during epidemics, when people spend a lot of time indoors. Tulip mania coincided with an outbreak of bubonic plague in the Netherlands that killed a fifth of Amsterdam’s population between 1635 and 1636.

As the character of a weaver who mortgaged his home and sold his loom to buy promissory notes for bulbs put it in “The Rise and Decline of Flora,” an anonymous Dutch satire on tulip mania, published in 1637, “It has been a madness.”

Will people feel the same about digital tokens?