Art handlers are the workhorses of the museum world, with duties that range from the mundane (lugging sculptures) to the challenging (operating pneumatic liftgates) as they install the shows that the public will later see.

And at MoMA PS1 in Queens, they are mostly artists themselves.

Marley Freeman, for example, is a painter, well received in many quarters, and like many of her colleagues, she views her art as her primary job. But art handling helps pay the bills, and she cherishes the flexibility that her part time hours allow.

Still, she said in an interview, she was upset this year when she noted the difference between what handlers were earning in Queens and what installers were being paid to do essentially equivalent work at the Museum of Modern Art in Manhattan. When both PS 1 and the MoMA mother ship staged parts of a Bruce Nauman show, for example, the handlers in Manhattan, full-time members of the museum staff with benefits, were paid as much as $47 an hour. The top rate in Queens was $30 an hour.

“I feel as an artist worker you’re betwixt and between,” Ms. Freeman said in a telephone interview. “You aren’t seen as a professional art handler. At PS1 they are always treating us like this is as just temporary work we’re doing between other things.”

The disparity led the art handlers in Queens, who do not receive health insurance or other benefits, to begin demonstrating outside the museum last month as they worked to negotiate a new contract to replace one that expired in the fall.

Robert Wilson, the business representative for Local 30 of the International Union of Operating Engineers, said the handlers at PS 1 are “doing the same work as the people at MoMA and they deserve to have the same pay or close.”

In a statement, PS1 called their installers and maintenance staff, who are also negotiating a new contract, “a terrific team.”

“We are committed to reaching a new contract with Local 30 and continue to make progress in negotiations,” the museum said. “It’s been a productive process, and we’re confident we’ll arrive at an amicable resolution.” 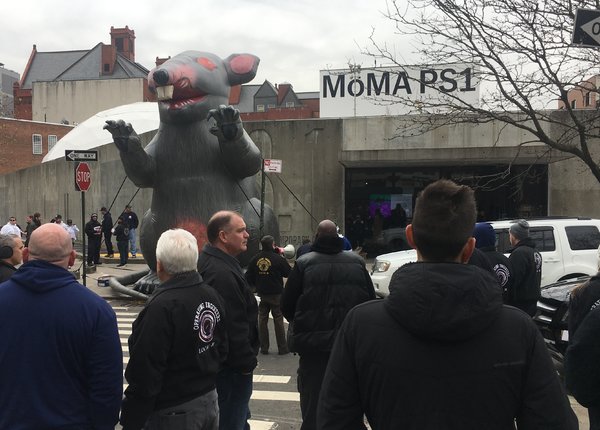 Most handlers in New York City have an art background, said Matt Chastain, who has a decade of experience in the field. He has worked as a handler at PS1 for two years and has also worked at the Gagosian gallery and with international art fairs. But, he said, many handlers end up foregoing their artistic practices if they accept a full-time job as an installer.

So the handlers at PS1, living with a foot in each world, are an exception, said Mr. Chastain whose artistic pursuits have included co-writing a feature length film, “Thanksgiving,” produced in 2014. He estimated that more than 90 percent of the roughly 30 art handlers who work regularly at PS1 are active artists.

Ms. Freeman, who studied at the Art Institute of Chicago and Bard College, turned to art handling about a decade ago after losing a job as an assistant to the buyer at a textile mill. Over the last several years, she has forged a successful career as a painter, with solo shows at galleries in New York, Berlin and Los Angeles.

Her job at PS1 requires her to work for six weeks to three months straight, Ms. Freeman said, but also includes months off between installations, time she has used to work on what she calls her “figural abstraction” paintings, in which she layers overlapping bands of oil or acrylic on linen or canvas.

Although her art handler job is in many ways convenient, Ms. Freeman said it is not cushy. Handlers have to be able to set up complex audio and visual installations and use saws, routers and drills to build walls and pedestals. On deadline for an opening, she said, the work can mean long hours of hauling objects and inhaling fumes from paint or solvents.

“After an installation, it takes a few days to a week to recover,” she said. “I usually have big dark circles under my eyes, and I’m deeply exhausted.”

Chris Haag, a musician and video artist who has worked as an art handler at PS1 for six years, said it benefits the museum that many of the handlers are artists themselves because some of the work goes beyond simple labor and involves helping to implement artistic visions.

He cited the intricate, pierced, moire-patterned steel panels that curved through PS1 during a 2016 retrospective of the artist, architect and designer Vito Acconci. Built by the handlers, it provided a showcase for Mr. Acconci’s archive of notes, drawings and newspaper clips.

“MoMA is the big fish in the big sea of the New York art world,” Mr. Haag said. “What we’re asking for is just a drop in the bucket.”