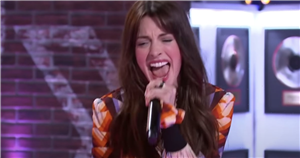 Anne Hathaway just momentarily dethroned Kelly Clarkson as the queen of musical covers. The “WeCrashed” star stopped by “The Kelly Clarkson Show” on March 22 and went head to head with the host in a game called “Sing That Name That Tune,” which challenges guests to identify and sing a track after hearing just the first few notes. When a band began playing Clarkson’s 2004 hit song “Since U Been Gone” with a guitar, keyboard, and drum set, Hathaway didn’t hesitate to step up and belt out the chorus’s lyrics with perfect pitch. Clarkson, meanwhile, instantly collapsed to the floor upon realizing she didn’t recognize her own song.

“How did you know it from just that?” a rather exasperated Clarkson says after regaining her footing, to which Hathaway replies, “Kelly Clarkson, if you do not understand how much we all love that song . . . Everybody here knew it!” Clarkson then jokes, “Should I just quit? This is embarrassing.”

Of course, dedicated Hathaway fans know this is hardly the first time she’s shown off her impressive vocals. In addition to starring in the 2012 musical “Les Misérables” alongside Hugh Jackson, she also sings in “Ella Enchanted” and for her voice roles in “The Simpsons,” “Rio,” and “Rio 2.” So, who’s ready for Hathaway to crank out an entire Clarkson tribute album? Because we absolutely need to hear her version of “Stronger.”